The episode started off with a conflict.  One of the divorcees accused Starr of pushing her sports bra out the window of their hotel.  Starr denied it but let's be honest she probably did it.  Starr and her effeminate brother Nick are ruthless.  They'll cheat, lie and push undergarments off buildings.  Since the divorcees are already angry and bitter at the world  this just intensifies their anger.  Now  the target of their hatred is Nick and Starr instead of their ex-husbands. 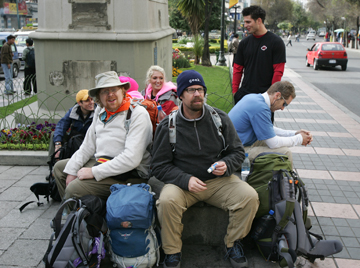 All the teams have to go to La Paz, Bolivia which is 12,000 feet above sea level.  This means all the old people are going to be out of breath.  They get to La Paz and they have to spend the night on blankets by a statue while they wait for the morning paper.   The paper arrives and they scour the ads looking for their next clue.  The clue tells them to go buy these little Bolivian bowler hats. The teams race to get them.

Upon leaving the hat store, two teams do not read the clue properly it says that they must travel by foot to the detour but they took taxis.  Only Terrence and Sarah realize their mistake and turn around to correct it.  That means my favorite team the San Diego Nerds will incur a time penalty.

The detour gives the teams the choice of riding really unsafe bikes made of wood down a long cobblestone street or leading a very slow moving marching band down a street until they get their next clue.

Everybody but the two Southern blondes and the Frat Guys take the bikes.  It is apparent from the beginning that the bikes are very dangerous and the teams have no idea how to use the breaks.  One of the divorcees wipes out really hard as she jumps a curb and hits a wall.  I'm surprised she is able to walk away from it. 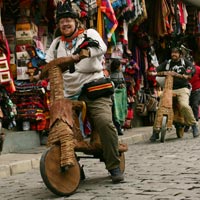 While riding their bikes down the hill Nick and Starr ask another team to U-Turn the Divorcees.  A U-Turn can only be used once in the whole race and all the teams decide not to use it.

All the Teams then take Taxis to a wrestling ring where they must train and fight women by using a combination of moves.  One of the Nerds, named Mark needed an oxygen tank and had to do the wrestling three times because he kept messing up his moves. 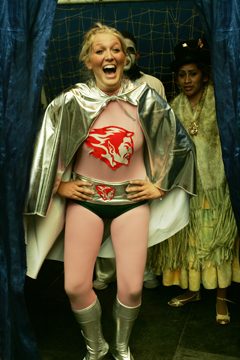 At the end Quarterback and the wife that he cheated on came in first.  She really needs to grow some real eyebrows, she's grossing me out.

The last two teams are the Divorcees and the Nerds.  The nerds have to wait 30 minutes as a penalty for taking a taxi when they were supposed to walk.  The Divorcees took 8th place and the Nerds were eliminated.

I'm a little bummed that my San Diego Nerds were eliminated, but I have to move on and choose the mother and son combo Toni and Dallas as my new favorites.  I'm actually liking the Southern Blondes a little bit now too.  They are so ditzy that they make the episode fun.