I'm so sick of Ken and Tina being in the lead.  They are so old, how is it that nobody can beat them?  The episode starts with all the teams racing to the airport to catch a flight to Cambodia.  Along the way Terrence and Sarah get a speeding ticket.  Sarah says "I always thought you were a slow driver".  Terrence replies "That's not what you say to a person that just got a speeding ticket, I need to be comforted!"  Maybe he doesn't use those exact words, but he says something bitchy like that.  Then Sarah apologizes but continues "... but seriously I thought you were a slow driver".  At the end of the episode we find out that a half hour penalty will slow down Terrence because of his speeding.

In the airport Team Divorce makes fun of Dallas because he has spikey hair.  Understandable... sure, but mean.  They whispered to each other how Dallas looked like Teen Wolf.  Goes to show how stupid they are, Teen Wolf didn't even have spikey hair. Dallas responded:

"Kelly & Christy irk my nerve. They think they're God's gift to this earth. I wonder what they would look like if they didn't paint their faces in the morning."

As every team finds a way to board the first flight, the long distance dating couple that has barely been on the show is left behind.

There was a weird moment between the Frat Boys and I forget exactly when it happened, Andrew tells the camera that "My relationship with Dan is at a turning point..." they either need to make it work or move on.  What are they dating or something?  He's your dumb Frat bro, you don't have relationships with Frat Bros you do keg stands, drive vans with no windows and play pranks on each other.

The teams all arrive in Cambodia and must pump gas into a truck that will drive them to Siem Reap Harbor.  None of the teams have much trouble except the Frat Guys.  Who would have thought that Frat Guys wouldn't be able to pump fast enough? 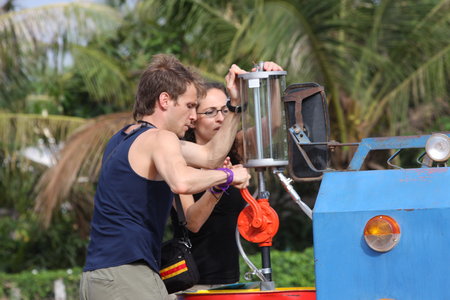 I should probably take a break from the commentary for a moment to say that I really don't like the Nick and Starr team very much.  They are one of those teams that will back stab anybody to get ahead and just seem to be very unlikeable.  I noticed something during tonight's episode that made me rethink that opinion slightly.  Starr is hot.

The teams have to get in boats and race to a Water World type village on South East Asia's largest lake.  Terrence and Sarah are within sight of their objective when their boat breaks down, the engine becomes flooded with water.  Terrence does what he does best... he bitches and moans like a little cry baby.  He also pleads with Sarah to comfort him.  Ugh.  I can't take much more of this guy.  Fortunately he takes matters into his own hands and helps push the boat to dock.  He does it really bitchy though so it doesn't help too much. 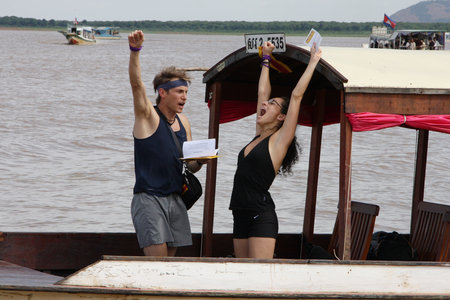 The teams then get a choice of collecting items from around the water village or doing some work by collecting fish that were collected in traps.  Nick and Starr choose to do work and jump into the muddy water.  My first thoughts are "Ugh I hate NIck and Starr" but then I reconsidered.  "Starr getting all muddy might be sexy".  It wasn't, it was just mud and fish. Oh well. 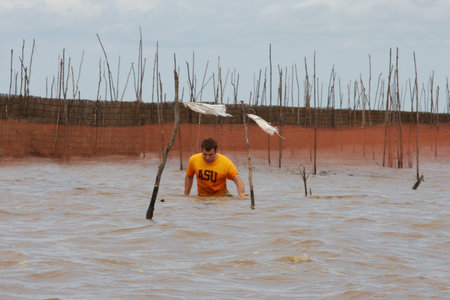 Next all the teams head to the largest temple in the world.  I think that's what they said.  Teams had to find this echo chamber and it was pretty much luck if they found it.  Some found it quickly and others took forever.  Fortunately for us Ken and Tina had trouble finding it so we didn't have see them in the lead any longer.

Nick and Starr ended up winning.  The real winner might be Dallas next week as he attempts to hook up with Starr.