Share All sharing options for: Toughest Race on Earth: Iditarod

If you're not watching the Discovery Channel's Iditarod show then you should really reconsider.  I've had the first two episodes on my DVR for a couple weeks and just really haven't felt like diving into them because I didn't really think I was interested in dog driven sled racing.  Turns out that I am now. 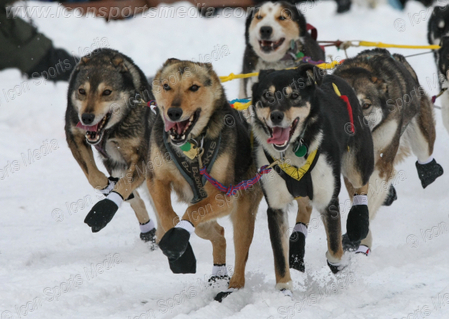 The Discovery Channel is following about 8 mushers of differing skill levels on the race.  It's fascinating to see a group of guys that have won the race 4 times each battle adversity to go after another title.

Jeff King seems to be just flying along without any trouble at all.  He's even giving a ride to two of his dogs in order to better rest them.  So he's cruising a long in the top 5 with only 14 dogs and checking his competition and finding their weaknesses.

Meanwhile last year's winner Lance Mackey is having a hell of at time.  He's already had to scratch his fastest dog and the others don't seem to be that motivated or are suffering a few injuries.

A father and son are also both going along and seem to be doing well.

I should probably tell you that I've already forgotten who won this years race and I'm afraid to try and google their exact names because I don't want to ruin the surprise for myself.