Older than 80? Marathon is your sport

Share All sharing options for: Older than 80? Marathon is your sport 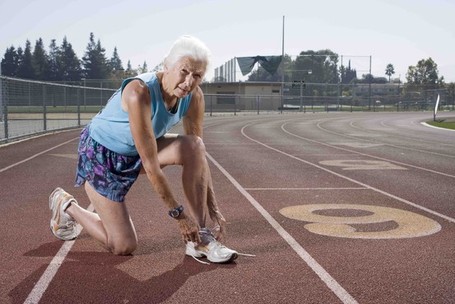 I will run you down or literally die trying via s.wsj.net

I've never been much of a distance runner. I ran track in high school, but I primarily did the jump events. If I ran more than a 100 yard dash, I'd be pretty well winded. My wife is a distance runner. She can move very methodically for very long periods of time. I find it amazing.

That's why I enjoyed the WSJ profile of distance runners over the age of 80. I've seen old people and even the feistiest ones aren't running around for hours on end.

Never mind the Kenyans who will battle through Central Park early Sunday afternoon and break the tape of the New York City Marathon in roughly two hours. The most intriguing competition among the 39,000-plus runners should come four hours later in the women's 80-90-year-old division, the oldest group of women competing this year.

Ms. Johnson will try to hold off four others in the race, including Bertha McGruder, who is in the 80-90 division for the first time after completing last year's race in six hours, 15 minutes, good for third place among 75-79-year-old women

I've seen old people run and it's a little scary. It doesn't look at all like a pleasant experience, but I guess if you're into it, you're into it.

"I've told my friends if I die here on this track do not call 911 because I do not want to be revived," [Joy Johnson] says in the middle of two-hour workout earlier this week. "I say, wait a half an hour, maybe 45 minutes, then call the mortician. That's the way I want to go."

Yet another reason to be nervous when watching old people run.