This episode started off with more drama between Terrence and Sarah.  Terrence is the one that we've identified as the "little b*tch" in an early post.  It just got worse during this episode. Terrence is so precious and needs Sarah to mother him every moment.

A tearful Sarah insisted, "I do want to be with you. I just don’t want to not speak to another single person which I feel is the only thing that’s going to make you feel like I want to be with you." At this remark, Terence walked away while Sarah begged for a resolution to their disagreement. Sarah later added, "I feel like every time I talk to another Team, he feels like I’m betraying him."

I think the best part of the episode was when Terrence is putting their bags in the back of a cab and the cab driver slams the trunk door on his head.  Terrence flips out.  "Look what happened to me!  Look at the blood!"  Sarah responds "There is no blood".  While in the cab he makes her clean the small abrasion with a kleenex and then he asks her to blow on it.  I'm surprised he didn't ask for a glass of choclate milk too.  What is wrong with this man-child? 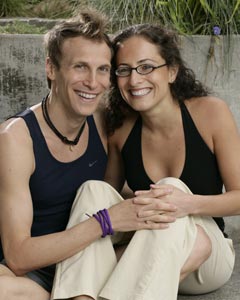 When the teams get to the airport.  Ken and Tina (football player cheater and blonde wife) beg and plead for a seat on an earlier flight.  The airline makes a decision to switch to a larger plane and are able to accomodate all the teams. Although you will definitely hear differently from Tina, she had NOTHING to do with an airline switching to a bigger plane.  That didn't stop her from congratulating herself and making sure that every other team was aware of what she did (or didn't do).

When they are getting on the flight.  Tina cuts to the front of the line and says "What's fair is fair" thinking that she deserves to be in front since she got the bigger plane.  Terrence finally acting like a man calls her out and then whimpers and hides when Ken confronts him and then kisses him.  This whole thing was weird.  Terrence was heard saying while blushing "I smile all the time, people just don't know it".

I got to say the teams are so dumb fighting over seats that will give them a 3 foot lead over their competitors.  Why stress over something so stupid?

They get to the beach and ride these dune buggies to a detour.  They can either move a sail boat by rolling it on logs across the sand or search a database and open a shipping container in a freight yard.

Every team except  my team, my nerds Mark and Bill, do the sail boat thing.  The teams all get pretty tired pushing the boats and Mark and Bill find their cargo relatively easily.

The best part of this was that the divorcees, Kelly and Christy were confused and thought they had to move a sail boat and find a container.  So after they moved the sail boat they start digging in the sand by this little flag with the hands trying to find a container.  They had absolutely no idea what was going on.

Terrence and Sarah meanwhile finish first but decide to run for a few miles away from the taxi area to try and find taxis.  They are also confused when teams start driving past them.  The mother son team is nice enough to help them find a taxi.

The next challenge is Wall of Words where they have to find a location on a wall written in Portuguese.  It's a dumb challenge.  The divorcees screw up again.  They think they let their cab leave but it was waiting for them the whole time.

Ken and Tina out ran Mark and Bill to the finish.  I'm really not liking Ken and Tina.  Nobody beats my San Diego sweaty nerds and gets away with it.

The team that was eliminated was the couple that needed the million dollars to get married. 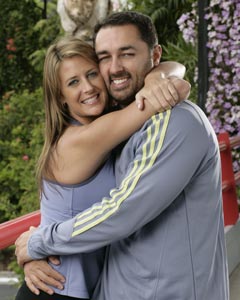 The guy Anthony was totally serious and thankful after his elimination.

Anthony added, "I have a lot of things in my life to be thankful for. I have my health. I have my parents. I have my looks and I have Stephanie."