The teams leave Dehli and go to this little park between these old apartments.  In the park are about 50 punk ass Indian dudes with water, paint and powdered dye.  I saw the previews and I couldn't believe that Nick was letting his sister Starr run this gauntlet of jerks.  Luckily for her the Indian guys hadn't grown irritable yet and barely even touched Starr.  These dudes in India give real pervy looks when the women on the teams run by with tight clothing and all I can say is that Starr was lucky she went first.  As Nick was helping Starr get her gear together some dude just walks up and throws a huge handful of powdered dye in Nicks face. 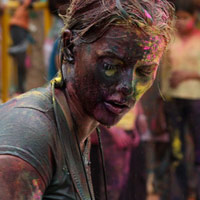 By the time Team Divorce showed up they were ready to wreak havoc.  I'm not even a fan of that team but they were treated so cruelly by these a-holes from India.  The brunette Divorcee was hammered time and again by Dye and paint.  She couldn't see, she couldn't breathe and she couldn't find the clue hidden in the park.  I really felt sorry for her and I think if I would have been there there would have been a park full of dead Indian dudes covered in paint.  I hate to say it but I cheered when Terrence got the clue and ran straight through some Indian dudes and knocked them off their feet.  Finally he does something cool.

I thought for sure Terrence was going to make his girlfriend Sarah do the challenge but surprisingly he manned up and did it himself.  To get Terrence pumped up she says "Who's your girl?" and he answers "I am!... Oh, you are!"  Really funny.

The rest of the teams some how manage to control their tempers and actually don't mind that these guys are being dicks.  Some teams even seem to have fun.

Team Divorce has the most trouble and loses a bunch of time, it feels like the Indian guys are picking on her more than others.  When Team Divorce finally finishes the challenge nobody will give them a ride because they are covered in paint.

In the taxi Team Divorce quizzes each other.  "If you had to make out with one of the frat guys who would it be?"  The Brunette picks the red haired Frat guy because "He seems different".  They giggle and laugh.  They should actually do it, that'd be a great challenge.

The next challenge sends all the teams to a bird hospital.  They find a clue that tells them that they either have to carry chili peppers a quarter mile and crush them which burns the eyes and throat or they have to follow tangled phone lines and find the numbers hanging on them.  All the teams choose the Phone Line challenge except Terrence and Sarah who decide to crush chili peppers.

Since Ken and Tina finished in last place last episode they have to do a speed bump which is really just an extra challenge, they have to hand out water to tourists.  They do it and then pass all the other teams on the Phone Line challenge.

After just about every team gets stuck in traffic they make their way to the pit stop.

You know how they always have a local guy welcoming the teams to the country and to the pit stop?  For some reason the Indian guy wouldn't stand at the finish with Phil.  He was too busy watering the lawn and Phil would keep yelling for him to come over.  It was pretty funny.

This was my favorite episode of the season so far, though in the end Team Divorce was eliminated.  I was actually a little sad to see them go.