The episode starts with Dallas and Starr flirting at a hotel while their partners do all the work trying to get flights.  Starr asks Dallas why he wouldn't make eye contact with her back in LA and wondered if he was shy.  Dallas said he wasn't shy just locked into the race.  They are totally digging each other, they even sat next to each other on the flight!  Wooooooo!

On the way to the airport, Dallas said, "It’s tough. I want to be able to help out Nick & Starr as much as possible, especially Starr, but I also want to win a million dollars. If I win the million at least I’ll be able to pay for dinner."

The teams take three different flights but they all have to wait outside a chicken factory in Kazakhstan.  The teams race for their clues.  One of the frat guys is the fastest which is unbelievable to me and as he pulls the clue out of the box, Nick rips it out of his hand.  Nick is scum dude.  They are given the option of finding a golden egg in a pen with thousands of chickens or do a fast forward that allow them to do a task and then skip to the end.

Terrence-Sarah and Nick-Starr race off in cabs to do the Fast Forward, it's a large risk with a big reward.  I was trying to think if I would do the Fast Forward.  I don't think I would, because I would be pretty confident that I could beat the other teams at the regular race.

The Fast Forward was eating a bunch of goat and sheep fatty meat.  It looked gross, I don't think I would have been able to do it, I have an over active gag reflex.  I gagged just thinking about it.  Terrence has been a vegetarian for 15 years and he tried to eat the meat but couldn't get it done.  They try but end up quitting about half way through.  Nick and Starr cruise to the end by winning the Fast Forward.  Terrence and Sarah are now really far behind the pack.

Frat guys, Mother and Son and Football player and Wife all find their golden eggs in the factory farm.  Have you ever smelled a chicken farm?  Disgusting. 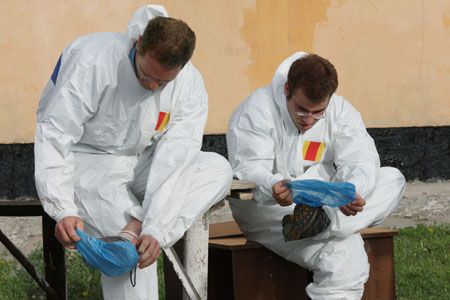 They then need to take this big truck to some hill and Mongolian Warriors give them a clue via Eagle.  They are again given a choice.  They can either learn a traditional folk song on two instrument and then play for tips in the park or dress as a cow and run around the city.  Everybody chose to dress like a cow.  I thought learning the folk song would have been much easier and quicker, with less chance of getting lost. 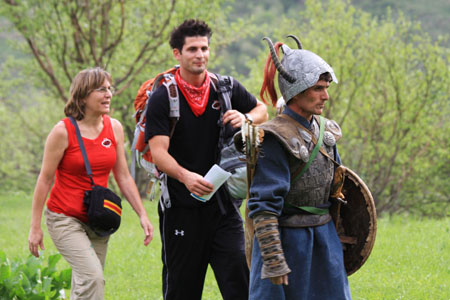 Toni and Dallas the mother and son seem to have so much fun, they were walking around dancing in the cow costume and finish third.  Ken and Tina took the cow costume off too early and cost themselves a ton of time by doubling back.  The frat guys leave their shoes behind in the costume.  I'm hoping that they have to run the rest of the race without shoes. 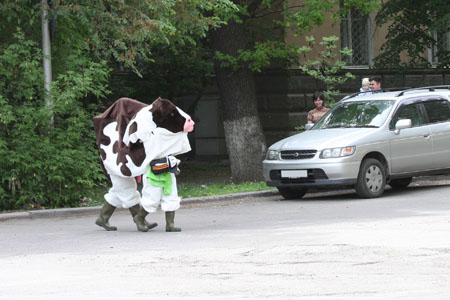 Terrence and Sarah made a valiant effort to catch up but they were just too far behind because of the botched Fast Forward.