Episode 9 starts with a lot of flirting between Dallas and Starr.  Speaking of Dallas, did you know that Starr was a Dallas Cowboy's Cheerleader? 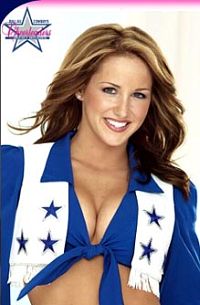 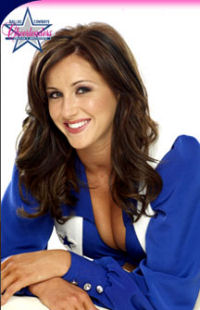 See there's your proof and here's her swimsuit calander photos.

Where was I?  Oh yeah, so Dallas and Starr were flirting, she would purposely bump into him while he was walking, he put his hand on her leg, she put her hand on top of his hand which was on top of her leg.  It was all very sexy.

"Coming into this race, I never thought that I would have any kind of relationship. Things just happen in the world. I’m glad that I met Starr. She’s a very cool girl, but one of us is going to win the million dollars and one of us isn’t. And whoever wins it is going to love having it and the other person’s going to be a little jealous." To Nick and Starr, Dallas joked, "You guys have won so many things I’m pissed. I’m actually pissed. I hate it."

One of the things I was looking forward to in this episode was that the Frat Bros didn't have any shoes.  In the last episode they left them behind and so they started the race with slipper sandals from the hotel.  They decided to buy shoes at a store in the airport, spending $300 dollars on shoes.  It would later turn out to be a mistake.

All the teams were on the same flight to Moscow, Russia.  Once they landed most of the teams had trouble with their cab drivers.  None of them spoke English and most of them got lost on the way to the first stop.

All the teams went to a church first to light a candle and get a clue, from there they had to go to an old military base.  They had a choice between two challenges.  The first was to learn to march with a Russian soldiers or to feed soup to 75 Russian Soldiers. 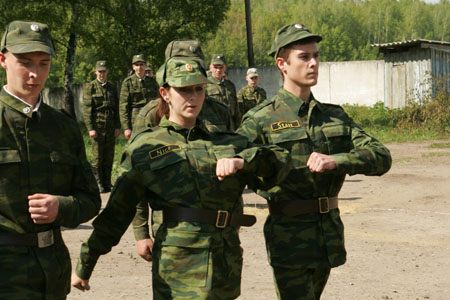 It's pretty interesting that Russian soldiers don't wear socks, they take a cloth and fold it around their feet.  Some teams (the frat boys) found it impossible to fold the cloth and wasted a lot of time.  They decided to give up and serve soup instead.  They took off their soldier uniforms and by the time they got ready to serve soup realized that they had to put the uniforms back on before they could serve.  Frustrated they dressed again in uniform and decided to do the march again.

Watching brown haired frat boy march was the funniest thing I've seen on TV in quite some time.  I was cracking up.  He is a total spazz and marched like a Lollipop Kid.  Do yourself a favor and watch that scene in the episode on line.   Actually, here it is right here:

All the Russian soldiers are laughing at him because he is so bad and has no coordination.  Again they give up and decide to serve soup again.  Here's his excuses for not being able to march.

I think I would have served soup from the beginning because it seems like it would be so much easier and faster since you didn't have to learn to march ahead of time.

Nick and Starr have a terrible cab driver and get lost multiple times, but still remain ahead of the Frat Bros who can't seem to get it together.

All the teams then face a road block at a bakery.  One of the team members must carry 50, 50 lb bags from a truck into the store.  Dallas gets there first but tires himself out trying to carry two bags at a time.  The challenge seems really difficult, I wonder what would have happened with an all girl team, would they have been able to pick up a 50 lb bag of flour?  We'll never know.

As the teams race to the end Dallas and his mother Toni win their first leg of the race.  The Frat Bros however run out of money and don't have enough to pay the cab driver.  He's been driving them around for 6 hours and they don't have any money left because they bought shoes.  The disgusted cab driver eventually leaves them after they offer him their shoes.  They end up in last place but are not eliminated from the race.