There are so many absurd things going on here, I don't even know where to begin. But I have to begin sooner or later, so while I choose, look at this very awkward picture: 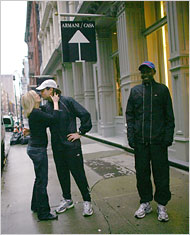 Michael Chambers is a running enthusiast, a wealthy one. No, I don't mean, "he's an enthusiastic guy who is currently running," no... well, I suppose I don't know what he's doing this very moment, so he might be running. I'm not sure. The point is, this man enjoys running a lot, more than most. He does it just for fun. This man enjoys running so much that he's developed quite an obsession with Kenyans.

Chambers had become enamored with the strength of the Kenyan runners, and the stories of poverty and perseverance behind them. He recently read Toby Tanser’s book “More Fire: How to Run the Kenyan Way.”

For last year's birthday, he and his wife Tina went to Kenya to run with the Kenyans. What do you get for the man who has already ran with Kenyans in Kenya? Kenya dig that she got him a Kenyan?

"What a birthday present," a stunned Chambers said as Richard Kiplagat, 27, entered his SoHo apartment, ready to run.

Kiplagat was paid $400 to run with Chambers and have lunch with his family. A driver in a Lincoln Town Car picked him up at dawn at his home in New Milford, N.J., and returned him late in the afternoon.

The $400 was decided on arbitrarily by Kiplagat and his agent. Honestly, I think even Rick Thurman could have gotten him a better deal. This is a real, live authentic Kenyan were are talking, primo stuff.

On the other hand, what do you do if you are a Kenyan and a rich white dude wants to pay you to run with him? Why, you run his ass ragged, of course!

They ran eight miles, at a sturdy 7-minute-per-mile pace. It was quick for Chambers, but Kiplagat usually trains by running 10 or more miles at a 5:45-per-mile pace.

Quick for Chambers? Someone's understating. Tell me how he really did.

Chambers was drenched in rain and sweat. Kiplagat looked as if he had done little more than climb a flight of stairs.

"I was pushing him a little bit," Kiplagat said. "I wanted to see how fast he was. I was listening to his breathing. He was not breathing as hard as I thought. He looked very strong."

That's it, toy with him. I would have challenged him in a Million Dollar Foot Race! Sprint or long distance, bring it on, richie!

Running with endangered exotic predatory animals? Now that's something everyone can relate to!