Share All sharing options for: 99.993% Complete and Calling It Quits

Meet Alex Bellini, an Italian adventurer with a penchant for rowing, all alone, for extremely long periods of time. This sport is aptly named, "long distance rowing." You might be familiar with such bodies of water as the Mediterranean Sea and the Atlantic Ocean? "Been there, rowed that," he can say. 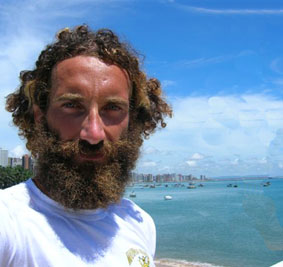 Alex Bellini (not Unabomber or Tom Hanks), via alexbellini.it

Naturally, an adventurer is always aspiring to do "the next big thing," so tackling the Pacific Ocean with oar in hand was next on his list. He quickly ran to MSPaint to plot his course:

Leaving from Peru in February of this year, he set sail row for Sydney, Australia, 18,000 km, or 9,500 nautical miles away. Armed with his trusty solar powered row-boat, a satellite phone, a crappy digital camera, and some fishing tackle, he rowed for 10 months across the Pacific. 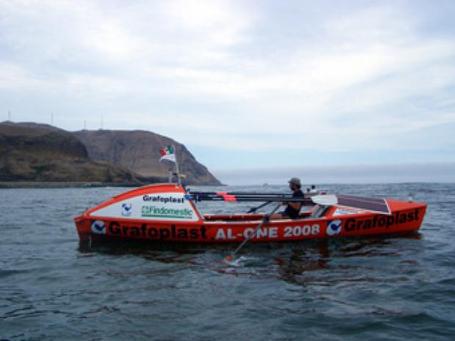 Alex subsisted on desalinated sea water and dried foods, frying fish he caught and boiling pasta using sea water (not an Italian joke, i know lol). On Friday, he snapped out of it (whatever it was), a mere 65 nautical miles from the town of Laurieton, Australia. He called his wife and told her he was exhausted. He could row no mo'.

He found himself craving sweet foods - especially tiramisu and apple cake - and was looking forward to gorging on desserts.

"It made me crazy. I want all the sweets here in Sydney," he said with a laugh.

The worst part of his journey was the loneliness and the longing he felt for his wife.

The two plan to return to their home in Trieste, Italy, in about a week.

For now, Bellini has no immediate plans to return to the open ocean. He has other priorities.

Why couldn't he just rest? He could have just gone to sleep and gotten pushed in by the currents, right? Oh well, I'd hate to see the look on his face when he checks his stock portfolio.