Jamaica, we have a bobsled team... again!

Share All sharing options for: Jamaica, we have a bobsled team... again!

The Jamaican bobsled team arrived in Vancouver over the weekend to begin training for three months in preparation for the 2010 Winter Olympics. This article says they were greeted by fans. Very cool. I, for one, am very excited. I loved the first movie as a young lad and I look forward to the next. I'm a sucker for nostalgia. 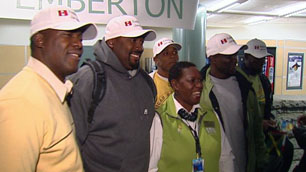 Returning to the cast is this guy: 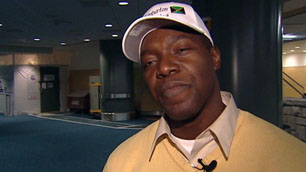 I don't remember who he was in the movie... he looks like the angry buff guy. It's going to be hard to recapture the magic of the original without the lovable John Candy, who did not return phone calls placed by Uncommon editors.*

Mr. Harris had these inspirational words:

"If you really believe in yourself, if you believe in your dreams and you pursue it with all your heart, which is what we did, some great things will happen," Harris said. "You'll crash a few times, but you can pick yourself up and move on from there."

* - No phone calls were placed in the writing of this piece.