Four time Olympic gold medalist, American swimmer, Dara Torres isn't ruling out dipping her toe into the Summer Olympics in 2012. Dara is 41 years old and would be competing at the age of 45. But Dara is in great shape: 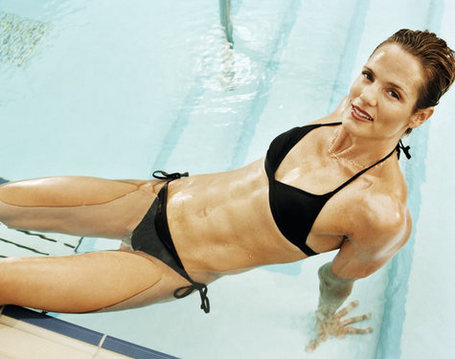 A guy who reports for AOL Fanhouse was watching Sex and the City reruns until Costas Now came on, and he had this to say:

In an appearance on HBO's Costas Now, Torres said flatly that she is not retired, and that she might just be in the pool in London.

"You have to put it in perspective," Torres said. "I am 41. No one in their 40s has swum in the Olympic Games and medaled before."

You're not retired, we get it. Jeez, you sound like Barry Bon-Oops.

What do you think? She only won us three silvers in Beijing, which is tantamount to FAIL when we care about the total gold count. Are we going to write off total gold count and just opt for the less prestigious total medal count again? Plus she can't even conjugate the word, "swim." Can we trust her at all? But she's also getting better as she gets older. It defies science. At this rate, she'll be a full-on marine mammal by the time she's 60.

I say we fax her agent while she's training in, I dunno... Puerto Rico, and tell her, "Deal's off. Youth movement."