Oh no, not Wii Knee!

Share All sharing options for: Oh no, not Wii Knee!

Uncommon sports are not without uncommon injuries. With Christmas only days away, doctors are fearing an "epidemic" of Wii Knee. What is Wii Knee? Well, it's when you play with your Wii so hard, you hurt your knee. Researchers at Leeds Teaching Hospital coined the term and claim the trend is prevalent among fathers trying to keep up with their children.

Kids are so lucky these days. Wouldn't it be more fun to not only beat adults in video games, but have them literally suffer a beating trying to win? 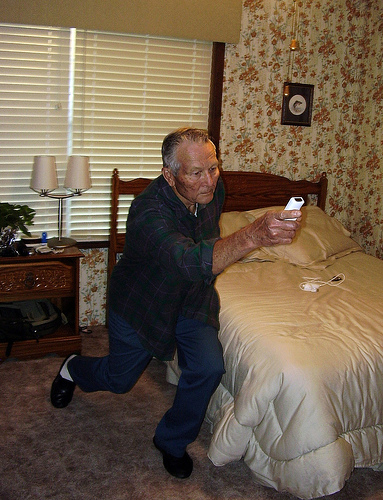 asking for it, via farm1.static.flickr.com

Richard Millner of the British Society for Surgery of the Hand, who has been keeping an eye on his NPDs, expects the number of incidents to rise over Christmas.

"We treated a patient this week who had injured herself using a Wii. She was playing tennis with a partner and fractured one of the bones in her finger when he hit the back of her hand with the control."

Does that even count? Spastic flailing in close proximity to another person is going to lead to some kind of harm.

Dr. Andrew Coley of Royal Shrewsbury Hospital said, "playing the game too long in the first flights of enthusiasm could lead to injury."

Dr. Coley injured himself trying to get an Ace on his serve, and later diagnosed a patient who had sustained a similar injury.

Before, video game-related injuries were limited to supergeeks of the 1980s with "atari thumb," and more recently, "hardcore gamers" who partied like rock stars. But now, with Nintendo aiming squarely at your family with fairly-priced home entertainment consoles and threats to get you off the couch, no living room is safe.