An Open Letter Regarding Motorcycle Stunts and Australian Cricket

Share All sharing options for: An Open Letter Regarding Motorcycle Stunts and Australian Cricket

It's me, Dex. I know we usually discuss things regarding Uncommon Sportsman via email, but I realized that since nobody really reads this blog, I could send you messages via the front page of Uncommon Sportsman and they'd be just as private as they would be anywhere else and this way, I wouldn't lose track of the messages beneath all of the Amazon spam I've been receiving lately.

Did you guys know that Robbie Maddison (or "Maddo" to his friends) will be attempting a crazy jump over the fake Arc de Triomphe in Vegas? He'll be doing it New Years' Eve on one of them ESPN channels. Here's a video:

Don't tell anybody, but ever since I turned 32, I've been more prone to motion sickness. I think I might throw up watching Maddo do his thing if they get the cameras just the right way. The other day, I was using some ear drops to clean out a little waxy build up and when I shook my head, I got so dizzy, I had to put my hands on my knees. True story.

Robbie Maddison is Australian and today I found out that the Australian cricket team lost, at home, to South Africa. It was the first time they'd lost at home in like 16 years. My guess... All their best athletes are doing crazy motorcycle stunts instead of holding down the muthaf_ckin' fort. Am I right? Tell me I'm not right. 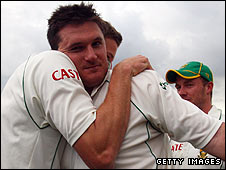 I don't know much about cricket, but I'm going to make a New Years Resolution to learn more about it and start supporting a team. I'd love to be able to decipher stuff like this bit of write-up regarding the game (or "test" as their fans might call it):

There was a stroke of good fortune about the boundary off Johnson that did it, however, Matthew Hayden fumbling a difficult low chance to his right at first slip.

By that stage only 31 were needed in any case, and less than 10 overs later it was all over, Amla clipping slow left-armer Michael Clarke through mid-wicket for two.

Isn't that crazy? Are those even complete sentences? I'm not even sure there was the right number of verbs or punctuation marks. It seems like there were way too many adverbs.

Anyways, I hope you guys have a good New Year. Let's try to double the Uncommon Sportsman readership to 8 next year. That's a good goal.