Share All sharing options for: The Amazing Race: Season 13 Episode 1

The one thing we did find out for sure and for certain is the bitch.  It's Terence.  He doesn't want his girlfriend to talk to anybody else, he only wants her to comfort him.  In his introduction he also tells the camera that he doesn't do anything he doesn't enjoy, so he doesn't work, but thankfully he is paid to train runners.

Terence describes himself as witty, sensitive and driven. One of his proudest accomplishments is finishing the last two New York City Marathons in under three hours.

It should read.  "Terence is overly sensitive and whiny".

The episode starts with all the teams in the Los Angeles Colliseum.  They drive to LAX and take two flights to Salvador, Brazil.  The first flight is delayed so they only have an hour and a half lead over the second flight.

Nick and Starr, who call themselves "the Kids" form an Alliance with Ken and Tina who they call "Mom and Dad".

Ken is an ex-professional football player who cheated on his wife and they are trying to make it work.

The first challenge is wheeling a candy cart over cobblestone streets to a Candy seller guy who gives them their next clue.  Everybody has a bit of trouble, but nothing terribly important happens. 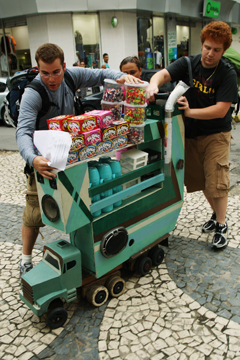 The teams follow their clue to a Brazilian Military Base where they camp overnight.  Starr has the hots for this meat head Dallas.

"[Dallas] is just the most attractive guy on the race. I'm not expecting any great sparks or flames, but who knows? Anything can happen."

The next day the teams reach a detour.  They either crawl up these Church steps on their hands and knees and answer a question or climb down a really high cargo net. 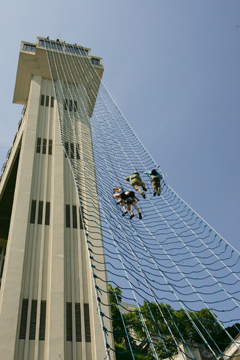 Every team except Andrew and Dan, the frat guys,  choose the cargo net.

The old Hippie Bee Keepers Anita and Arthur are just too slow and too tie dyed to keep up.  They are eliminated.