Share All sharing options for: Gay softball and watercross

The Kenosha, Wisconsin Park's Commision has approved the "Super Bowl of gay softball." I know, it's supposed to be the World Series, but saying, "Super" with a lisp is funnier than, "Series." It will be the North American Gay Amateur Alliance's 33rd annual Softball World Series.

And what other sport goes hand in hand with gay softball, you ask? Why, watercross, of course! 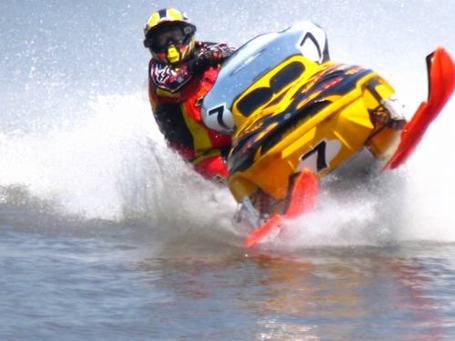 Despite the measure being passed unanimously, there was naturally some controversy. Stephen Casey abstained from voting after trying to defer the vote.

He told organizers Peter Nys and Mona Garcia he was concerned about language in the proposal, political ramifications for the city and questioned them about the ratio of players — about 80 percent gay.

“I’d like to look into this. Our city softball league doesn’t call itself a heterosexual softball league. I’ve got to digest this a little. I’m not comfortable supporting this tonight.”

It took a freshman to bring a little levity to the situation:

Michael Orth, in his first year as alderman, said it wasn’t the commission’s job to make a political statement.

Damn straight. The Park's Commission is just trying to get their play on.

“I take great offense, and as a 20-year alderman I ought to be able to ask whatever I want, wherever I want,” Casey said. “I’m a little tired of having a freshman alderman with a different point of view talking to me in a condescending tone.”

Casey later said he didn’t have a problem with the organization, but wanted time to ask some questions privately.

I think that's for the better. Questions like, "How many times can I bat for the other team?" should probably be left in private, given his outright and apparent hatred for "the gays."