Share All sharing options for: Kirkwall Ba' is dangero'

Ahh, ba' games. Yeah, I said ba'. You might know it as medieval football, where the townspeople divide themselves into two teams and brutally beat on each other in effort to get the ba' to the opposing team's goal. 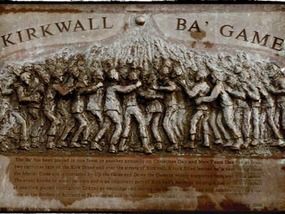 Kirkwall Ba', played in the town of Kirkwall, in Orkney, Scotland, is thought to have been played since the 1500s and has been recorded since the 1850s. The teams are the "Uppies" and the "Doonies" and who you play for is determined by which side of the Shire you were born on.

To the chagrin of competitors and spectators alike, this year's game was prefaced with a safety warning.

Bobby Leslie, 68, a member of the committee who has taken part in the games since he was 10, said: “We felt that it was time to step in and give players and bystanders some guidance on safety issues.

“Also, if there was to be a serious injury, or an incident which might involve damage to property which required an insurance claim, the clear warning beforehand gives us some protection on liability, in theory.”

Mr Leslie explained how, in the past, anonymous donors dealt with all instances of damage, or players themselves carried out repair work.

Well, gee Grandpa Buzzkill, that's only 400 or so years self-governing and you yourself have been doing it for 58 years now. There's nothing like dropping words like "insurance claim" and "liability" to ruin tradition and a good time. Before you know it, they'll be outlawing the throwing of claymores and the shouting of, "FREEDOM!"