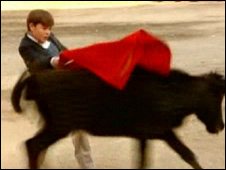 "I'm happy to have achieved this great victory," said Michelito Lagravere Peniche as he left the ring in Merida.

When questioned about the controversy surrounding the death of so many bulls by one child he responds:

"No-one is forcing them to watch bullfights or to keep informed about them. It's as if I told a boy who does motocross not to do it, it's very bothersome."

This kid doesn't have much patience for controversy. Why answer questions when time could be better spent killing bulls?  "The time I took answering your bothersome question I could have killed 12 bulls!"