I think I've found something we might be good at.  Sitting on a couch for extended periods of time.

You may not believe this, but ESPN Zone covered the Couch Potato Championship on New Years day.

ESPN Zone’s annual "Ultimate Couch Potato" contest will take place at the New York, Chicago, and Baltimore ESPN Zones, where four competitors at each location will buckle down to find out who can watch the most continuous hours of televised sports. The contest, which originated in Chicago seven years ago and expanded to New York last year, will also include the flagship ESPN Zone in Baltimore, which celebrated its 10th anniversary in July.

The winner this year wasr Stan Friedman who sat on his ass for 29 hours with no sleep and bathroom breaks every 8 hours. 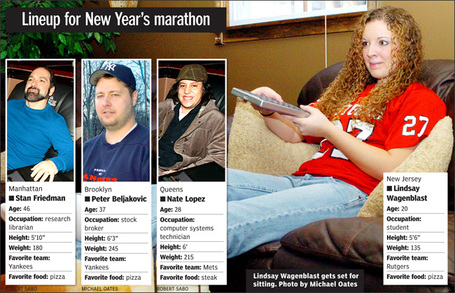