Nitro from American Gladiators used steriods for 20 years and he grew man boobs.

"Man boobs, breast-chesticles is what they're called on the street. Gynecomastia is the scientific name. No matter what you call it, I [had] it,"

Man the streets Nitro came from are tough, imagine the neighborhood that uses the term "Breast Chesticles".

He also hated getting his picture taken because of his growing boobies.

"I hate[d] taking off my shirt. For photo shoots, [I'd] wet my nipple with spit ... [to] look firm instead of hanging down." 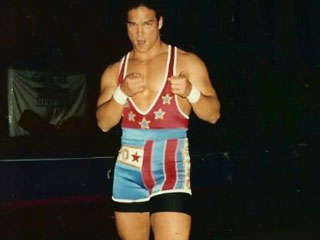 he pleaded with the wardrobe stylist to make him a new uniform, but didn't tell her it was "to hide my budding breasts." He eventually underwent reduction surgery.

He also got a bad case of shrunken balls that he was never able to recover from.  He gets a dull pain every time he makes sweet love to a woman and embarrassingly has to explain to them why they've turned to raisins.

American Gladiators is serious business and the price of winning is emasculation.