Every once in a while, a reality show team means something special to you.  They are human, they are caring, their friendship touches you, they race for the right reasons and you root for them for these reasons... or because they are hot chicks.  Really those are the only reasons to root for a reality show team.

Today I mourn the loss of my favorite team on the Amazing Race Season 15.

The teams left Ho Chi Minh City on route to Phonom Penh, Cambodia.  The teams all caught the first flight out of Vietnam and into Cambodia except for Team Prick Boston Lawyer Meathead and lovable Team Asperger.  As the others boarded the flight the remaining teams waited on standby.  One team was really nice and patient and one was lead by a Prick Boston Laywer Meadhead.  Both teams were allowed on the flight.

Upon landing, Zev from Team Asperger calls Phonom Penh by the name "Sean Penn".  It's adorable. Oh Team Asperger, how we love you.

The teams race to the Foreign Correspondence Club where they must whisper to dudes dressed with fedoras and vests asking them for their next assignment. 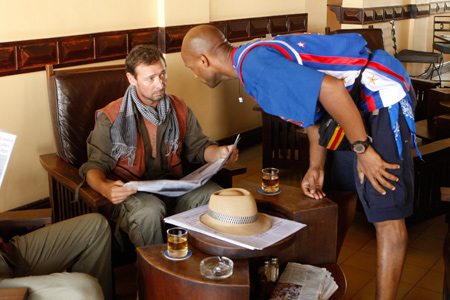 They are given an assignment with a picture enclosed.  They must find the hotel with the same picture in it.  The picture is obviously that of Jackie Kennedy.  Only a few of the teams recognize her.  The Country singer team has no idea and says that the woman obviously has Cambodian features.  Jackie Kennedy struck by the Camelot Curse in the face.

Team Asperger takes the lead from worst to first.  They find a great cab driver named Terry.  They share a mutual love for one another.  He leads them to their next challenge.  They can either sell motorcycle helmets to a family (entire families ride on one motorcycle over there) or they can find a person with matching scarf in a Russian market.

Finding the scarf is not easy.  Everybody has trouble because as Team Country girl says "It was really small, hot, tight and crowded.  It was just really hard."  I shouted at my TV... "THAT'S WHAT SHE SAID!"

Most teams realize that it is probably easier to find a scarf because you have more control rather than trying to depend on a family to buy something from you.  All teams choose to find scarfs except for Meathead Lawyer. 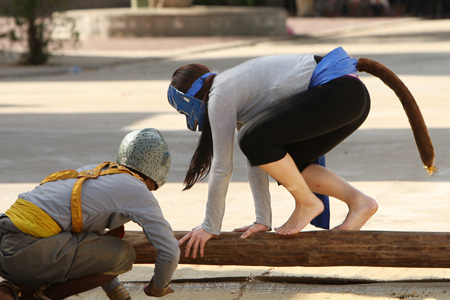 Out in front was Team Asperger and they went to the road block.  Zev the guy with Asperger's Syndrom had to be trained to wear a mask and perform 3 monkey tricks.  The tricks were insanely easy.  All of them were pretty much the same: balance yourself while kinda acting like a monkey as you made your way across a log.

Zev has a really hard time walking across using his hands and feet.  Justin explains that Zev was cursed with the body of an 80 year old man.  Zev is seriously dying and he's so frustrated and beat from doing practically nothing that he almost passes out.  Justin quickly dumps water on him and Zev is like "WTF?!"

While Zev is laying around, Team Gay Brothers pass them.  These brothers are pretty annoying, they are always so loud and excitable, always in such a hurry.  What is this a race?

They all jump into a motorcycle taxi called a tut-tut and make their way to Phil at the Pit Stop.  Fortunately the Gay Brothers lose out and get a slow tut-tut and our favorite team, Team Asperger finishes first.  Suck it Gay Brothers!  Wait, don't suck it!

All is right with the world. Until...

Team Asperger realizes that they lost Zev's Passport.  The rules state that you cannot check in at the pit stop with all your travel documents.  They are screwed.  They call their Taxi Buddy Terry to take them around looking for it, but they have accepted the fact that they will never find it.  They don't even know where to begin looking.

They return to Phil and tell him the bad news.  "Do what you got to do, Phil". He eliminates our favorite team from the race.  It's his job, but calling it a job doesn't make it right. 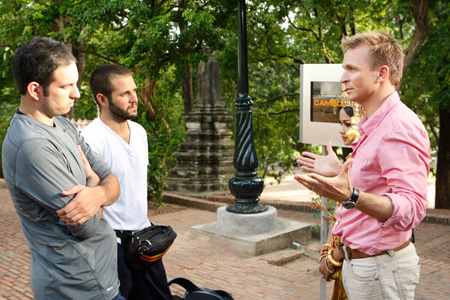 "What we’ve gone through was as special as any experience I’ve ever had in my life. I wish it had gone on longer. I think everything I hoped for him going into this has happened, and I think we’re going to be better friends because of it." Zev added, "This was my dream to be on the race, and it’s proven to me that I am capable of changing. I don’t have to do a daily routine day by day. I can go out and do different things and succeed at them."