Previously on ... UNCOMMON SURVIVOR: Down came the rains and washed the scheming out. Foa Foa was left huddling in their hut, instead of being able to sneak around and scheme. Liz has the cursed mark from Evil Russell upon her. Shambo is a "Gilligan." Someone's getting hurt tonight. There will be blood.

Day 15 at Foa Foa, and it's still raining. Evil Russell and Jaison go to warm off in the ocean water, and Jaison recalls his former ridicule of Captain Planet character Mai-Ti's ring, the Heart Ring. He wishes he had it now. I will admit, when I was young I did not realize the power of that ring, but think about it; you could get out of so many speeding tickets! Not to mention the traffic, comments, and recs you could get on your blog! It's been raining for five days straight. "This is the man test." Jaison is delirious.

Hey look, sea turtles. Galu isn't faring any better in the rain. Regret over not choosing the camping equipment is biting back like the extra jalapeños on chili cheese nachos. While the group is huddled up, Dread Russell is building a fire in the rain. Everyone resents his hard work. It is pretty futile building that fire. He eventually gives up and goes to try and get warm.

Foa Foa is still getting pounded by the rain, everyone except Evil Russell. He's a machine sent from the future.

Erik has a spiritual moment with a rainbow when the rain breaks at Galu late on Day 15. Everyone is rejuvenated by the rays of sunshine, but you can see Danger Dave shaking his head. Too bad we didn't get to hear him pissing on the parade.

Reward Challenge Time! Put a tribe member in big ball and roll them through a course while blindfolded with the tribe member inside the ball giving directions, then complete a tilting maze. The winner gets pizza while they sit in the losing tribe's council vote. Galu has to sit out four members, and John asks Dread Russell if he wants to sit out, but he wants to stay in. He sits Danger Dave instead, saving him from the danger.

Each team starts out shambling to the left and the right. Three quarters of the way through the course, Foa Foa takes a lead because Dread Russell is exhausted already. When they get to the mazes, he's completely tapped out. He stumbles around before finding his corner of the maze, but then he completely loses consciousness. Jeff gets to shout MEDIC and freezes everyone where they stand. Dread Russell wakes up for a moment, says he's okay, but then hits the ground again as the medical staff surrounds him. This is the "outlast" part of the game. Turns out his blood pressure is lower than Mike's was when they had him pulled. This game is a killer! On top of that, Jeff calls the challenge, nobody wins reward, and they now both have to vote someone out. All while Dread Russell gets to lie down with the cute medic and breathe pure, sweet oxygen. And there wasn't any blood.

Back at Galu, the mood is somber. They seem lost, even though the only difference between now and before the challenge was that there used to be a madman trying to build a fire in the rain.

Dread Russell is chilling out, having some water, telling everyone he's fine. He tries to sit up but then he dies for fourteen seconds. Yeah, he died there, for sure. You all saw it, and I counted fourteen seconds. He comes to, and his heart rate drops some thirty beats per minute. Dread Russell begs Jeff to stay in the game anyway. Jeff, you're killing him! Let him stay in! He signed a waiver, didn't he?

Back over at Foa Foa, where up until now has been the center for entertainment, Liz accepts her role as a subservient and expendable tribe member along with Natalie. They're not even going to try and stir up drama, she just knows that because she's a girl, she can't help her tribe. I wonder if she's proud of that, looking back. It's pretty easy for Evil Russell to pull the right strings to get Liz out.

On what is a very long day 15, back over at Galu, the ladies scheme to eliminate Shambo. Monica tells her that she has a good reason to vote her off because Shambo voted for her last time. Rocket Scientist John thinks that Monica should go instead of Shambo for some very good reasons. It's nice to see other people playing the game for once, rather than Evil Russell just dominating everyone else. Shambo begs the Galu guys not to write her name down, too. That would put me over the edge. I'd have to threaten to vote her out to get her to go away. They decide to tell her they're going to keep her, telling her to "lock it up." Naturally, she wants to put on a goofy grin and fist bump everybody.

Super Tribal Council Time! Everyone is informed that Dread Russell is pulled from the game. It was Jeff's scariest moment. Right after dropping the bomb, Jeff's going for the raw reactions to the news. Everyone discusses how hard the game has been. Erik and Shambo talk about prayer to God, which angers the one true overlord, Zeus, and he causes it to rain. Foa Foa thinks they won the challenge, but Erik doesn't think a tie counts as a win. He finishes tribal council by pointing his finger at them like a disciplinary dog owner.

The great lord Zeus smiles upon the Survivors and Jeff decides to call off the vote, due to unprecedented events. Galu is sent back to camp to choose a new leader. Good night sweet prince: 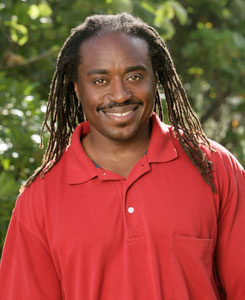 Next time, John takes Shambo under his wing, but the Evil Russell plague may spreading across tribal lines!