The last pit stop was a boat.  So while the teams rested they were being transported to My Tho, Vietnam.  The teams opened their instructions.  They had to travel to Ho Chi Minh City and search for the Golden Dragon Water Puppet Theater.

All the teams grabbed a cab except for Team Meat Head Lawyer from Boston.  He and his girl thought they were in Ho Chi Minh city.  This is not a smart team.  The Meat Head Lawyer calls himself the Lion of the Race and although some of the gazelles may be faster than him, he's going to hunt them down and eat them.  Oh brother.

Team Globetrottter were the first to arrive at the Puppet Theater.  There were puppet dragons circling the water with clues in their mouths.  Teams had to reach and grab the clue from the teasing dragons.  The dragons always seemed just out of reach.  I think I would have pretended that I could only reach a few feet and then dive for one. 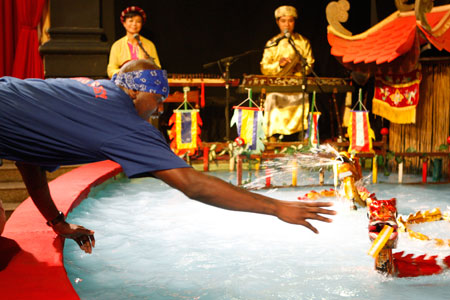 Inside the clue was a bullet.  The teams had to unscrew the bullet and inside they found a stamp with a picture of the Ho Chi Minh city post office on it.  None of the teams had any trouble figuring out the clue except for our dear friends Team Meat Head Lawyer.  They are running around in a state of panic.  They were handing the clue to random Vietnamese people then begging for a real clue.  The Meat Head Lawyer was yelling at his girl.  It was all quite entertaining to watch since I hate them so much.

Finally they figure out the clue and the girl asks Meat Head to apologize which he begrudgingly does.

All the teams arrive at the Post Office and find another clue, except Team Meat Head Lawyers, they run into the Post Office frantically looking for the clue when it was out front.  This is not a good team, folks.

This time clue is a Road Block.  They have a choice of moving concrete animals through a park or going to the top of a building, spotting letters on motorcycles and unscrambling them.  Most of the teams choose to move the concrete animals. 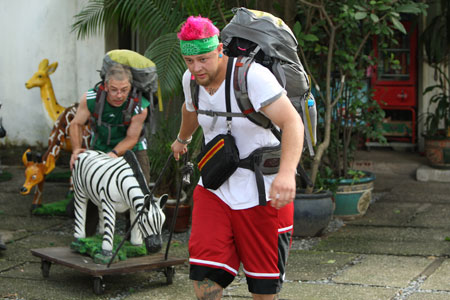 The smart teams chose concrete animals that were low to the ground and stable, like the concrete sheep for instance.  The not so smart teams chose tall animals that didn't balance well, like the giraffe.  The really dumb teams like Team Meat Head Lawyer forgot left their animal in the middle of the street while retrieving another balloon that they had carelessly let go.  Then when the other teams arrived at the finish handed off their balloons and put the animal in the stable, Team Meat Head Lawyer couldn't find the balloon lady.  She was right in front of them.  For the record she was the one holding all the balloons.

When Meat Head Lawyer finally realizes where he's supposed to be he practically destroys the park like a bull in a China shop trying to hurry.   This guy is a menace.

Team Old Internet Dating Couple mean while is trying to remain calm and cool while they try to decipher their Vietnamese Letter clues.  They are too slow and way in last place. 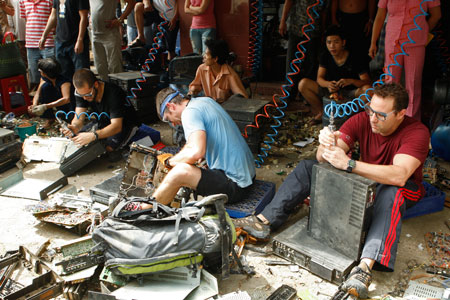 The other teams are already off to a electronics recycling center.  Teams have to unscrew VCR's and the like.  Everybody is doing about the same except... you guessed it... Team Meat Head Lawyer.  The guy decides to tear apart the electronics with his hands, not using any screws.  Okay it worked, but it was sooo uncivilized.

In the end Team Pretty People from San Diego and Team Globetrotters are in a foot race to the finish.  Globetrotters win by a few seconds.

Unfortunately Team Meat Head Lawyer was in second to last place.  Phil asks him if he is the most competitive person on the race.  In order to prove it he offers to wrestle Phil to the ground.  Ugh.

Team Old Internet Dating Couple roll in last.  The woman reminisces about her father who served in Vietnam as a General and was shot down and rescued in 1968.  She is glad she stepped up to the plate and competed in the race even though she was eliminated pretty early on. 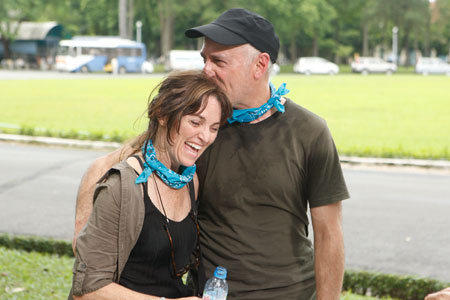