Previously on ... UNCOMMON SURVIVOR; It was the Best. Merge. Ever. The underdog Foa Foa members pulled a fantastic blindside on Erik, who brought his hidden immunity idol, but failed to play it. Evil Russell sensed danger and played his, which may or may not have been a smart move. He laid out his strategy in front of everyone and now he doesn't have any protection. And with Erik out, the Bros Before Hoes Alliance is broken and control of the tribe is essentially up for grabs.

Night 21 at Aiga, which could be a bottled water or a prescription drug, Russell knows he's on the chopping block, and Laura is crowning herself queen of the roost. Remember when everyone was under the spell of some kind of voodoo that made them believe that they had a tribe leader? Isn't it supposed to be Shambo?

The next morning, Natalie is overcome by hunger and kills a small rodent. She's even sick enough to ask it how it wants to die first, by stick or by rock. Then she cackles and says, "Just kidding, you don't get to pick," before smashing its head. She brings it back to camp and all the men's torches are lit because she's a hunter now. Marriage tip from Uncommon Survivor: Husbands, starve your wives. They'll get so hungry they'll kill household vermin in a bikini and you'll see a whole new attractiveness to them at the same time. 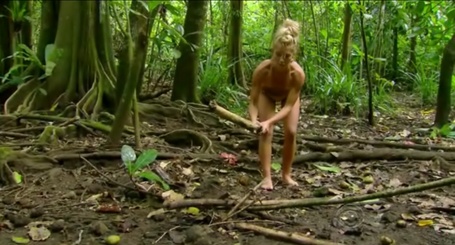 Tree Mail Time! Something about a digital display and a reward feast. Russell is already looking for another hidden idol. He's just crazy enough to find it, too.

Reward Challenge time! Collect a series of poles with coconuts on them and arrange them to find a four digit number, then have a blind-folded person Braille it out on a combination lock. The reward is a water slide and a feast. I wonder if that girl from Amazing Race is watching this. Since the game is 5 on 5, and there's 11 people, Natalie is left out. She gets to choose which horse to hitch her wagon to, and she chooses Yellow, which includes Russell and Jaison, former tribemates of hers. I also hate to say it, but they're losers in challenges.

The challenge starts and Yellow gets off to an early lead. Shambo lags on the last one for Purple, leaving Dave to carry by himself. They begin to assemble their codes and Dave figures it out and tells Monica the numbers. Yellow figures theirs out and tells Laura. Monica still pulls it out first and the Purple team wins. Dave, Shambo, Monica, John, and Kelly head off for their reward. Along with their food, they receive a clue telling them that there is in fact another idol hidden at camp. The five, who are all from Galu, talk about getting rid of Russell. Shambo wants to keep him, though. They all make a pact to not tell any of the former Foa Foa about the clue.

That's all well and good, because while those kids are off horsing around in the pool, Evil Russell is searching high and low for the new idol. Sure enough, he finds it under the bridge. The man is incredible. Even he is impressed with himself, but deservedly so this time. 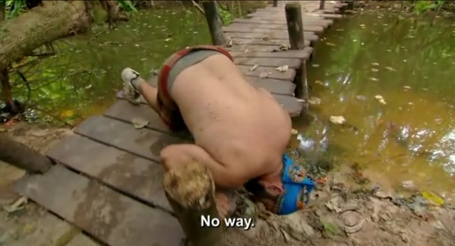 Day 24 at Aiga, Shambo and Russell go on a fishing trip. He decides to show the idol to Shambo and she falls in love with him. The plan is laid to set a trap for Laura, let her six vote for Russell and have their votes invalidated while decapitating the Medusa at the same time.

Immunity Challenge Time! Throw grappling hooks to get bags of puzzle pieces. The first three to finish advance and have to put pegs in a board, winner gets immunity. Mick reels in his two, then Shambo. Russell hooks his second bag, and Laura right after him. It becomes a race to the finish. In his fervor, his bag becomes unhooked and Laura is able to pluck her victory out of the sand. The second round begins, Shambo and Mick immediately untie their bags and take a lead. Laura starts to catch up and begins to peg holes like a sailor on shore leave, eventually winning immunity, spoiling the plans of Shambo and Russell.

After the challenge, it's strategy time. Shambo's heart is broken, but the plan is to shift the target to Laura's right hand girl, Kelly. Russell tells Jaison about the idol, and he goes back to tell Natalie and Mick. Jaison is really beginning to love him, too.

The tribe formerly known as Galu plans to vote off Russell, and Monica explains the exact scenario that is laying in wait for them. Russell walks by the group and they all stare at him. He overhears them discussing this, and thinks they might vote out Natalie instead of him, which toys with his mind.

Tribal Council Time! Jeff asks Dave if the fact that Erik is out means that the tribal lines are gone. They all throw Erik under the bus and he has to remain silent. It's quite the opposite and they discuss it at length. Ominous drums play as everyone votes.

Jeff asks for any hidden immunity idols, and Evil Russell plays his new one. Everyone on the tribe formerly known as Galu looks like they each just shat immunity idols, too. The first vote is for Russell, and it's invalidated, as with the next ones. The first vote that does count belongs to Kelly. Erik has been fist pumping this whole time, and Laura is steaming mad. The trap is executed perfectly and Kelly is eliminated. Back to back blindsides! Awesome! 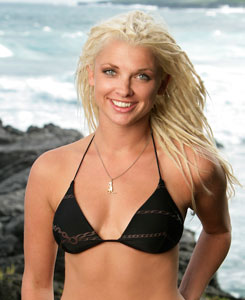 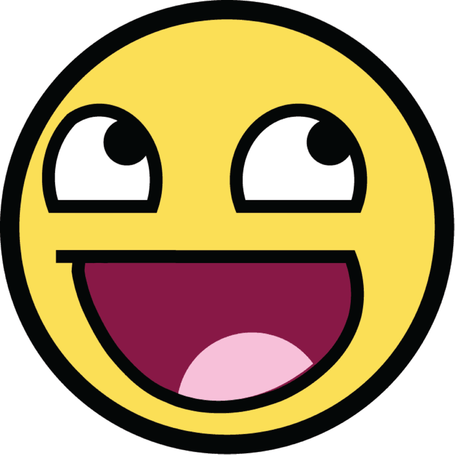 Next week, it's a whole new game... again. It's Laura vs. Mr. Invincible in a race to find... another hidden immunity idol?