Immediately after last week's tribal council, Evil Russell refers to his performance as a painting, and I can't argue at all, it has been a treat to watch him outwit and outplay. Laura can't stop saying, "wow" and she's kicking herself, hard. "He ruined everything." Shambo and Russell can't stop laughing, she's going to look for the next idol and give it to him again. I would hide it on a chicken.

Day 25 at Aiga, Russell is out hunting early, the early bird gets immunity. After another anti-Laura tirade, Shambo tries to recruit John to her splinter group, but he deflects instead of giving her an answer, any answer. But now he knows that she's flipped and has the Foa Foa Four on her side, and he promises not to betray her for asking. Why couldn't he have lied about the first thing?

Reward Challenge Time: Two teams maneuver someone in a cradle while they pick up flags and place them in a log. The reward is a trip to another island and a Palm Pre. Sponsorship, can you hear me now? Natalie's in the purple cradle, John's in the yellow one, and Natalie, being lighter, is easily grabbing and placing flags. John, a flag behind, knocks down a flag and loses more time. Natalie is barely in the cradle, holding herself up by her legs. She almost falls but she's able to hang on long enough to plant the 15th flag and win Reward. Natalie, Russell, Laura, Dave, and Brett get Palm Pres and fly to another island! Russell is excited about his phone because he needs to, "eat bad." The victorious five have a picnic and Dave poses in as many shots with Natalie as he can. The winners get their clues on their new phones.

Back at loser camp, Jaison makes an offer that Monica can refuse. They tell her they have a fifth vote, she thinks it's Shambo, but she also wants John out. My, how things change when you have a need.

As soon as Russell gets back, he rushes off to find the hidden idol after telling Jaison to look for a mossy rock. Dave keeps following Russell, so Russell sprints off. He circles around until Dave gets tired, and then goes back to where he thinks the idol is, only to find it and pocket it. The table is set!

Monica is whispering in Laura's ear, she doesn't trust Shambo and John. So much for Galu's number advantage, I think it's officially gone. Laura has to win immunity, she knows she's the target.

Immunity Challenge Time! Throw rocks to break tiles to get spears to shoot at targets. Jaison knocks out his first one, Dave knocks out Monica's, and Mick nails one of his own. Brett wanders out of the jungle and hits two of his own tiles with one throw. Laura goes last, she has to hit to stay in, but she misses, and Shambo bursts out laughing. How very unsportsmanlike! Brett goes first on the spear part and hits the target in the second ring. Jaison misses the target. Monica, who earned her way here via Dave, hits the target in the outer-most ring, not good enough. Mick lands a nice shot, forcing Brett to take his last shot. It's the battle of the nobodies! Brett fires and hits too low and Mick wins Immunity. Shambo foretells of Laura's destined demise.

There's a calm before the storm around camp. I guess when someone boring wins you give them a high five and that's it, no catchphrases in confessionals or anything. Shambo tells Brett flat out that she's voting for Laura and that Galu is dead. He cries a little bit. Dave and Laura, meanwhile, ask John who they should vote for. He decides that Natalie is the correct choice, and after a pause, Dave lets it go. Later, Dave, Monica and Brett decide they need a fake rumor to spread to Foa Foa, that John is the bait, but they can't tell him because he gets nervous. Monica tries to sway Russell, but he's not having it. She tries Mick, but he's wishy-washy at best. A small Foa Foa conference that doesn't include Natalie determines that they need to tell John. Speaking of him, Brett is letting John know that he's the bait. John doesn't like it at all. After talking to everyone, he's scared that there's votes being cast against him at all, even if the plan works. He doesn't want to be a pawn in Laura's game. He meets up with Russell and Russell catches him up on what's been delivered to him. John cites some rules with a colored rock in the event of a tie breaker. I don't remember this, I thought the two with the votes had to do a fire-making challenge.

Voting time! Jeff brings on the jury members and quickly senses the divide, figuring out that there's going to be a tie based on Laura's body language alone. Shambo, of course, writes down Laura's name, and Dave, in the only backstabbing he'll ever do to Natalie, writes, "NAT." They trade votes until it's tied. Erik pronounces this, "good sh_t." Everyone has to revote, and if it's still a tie, they have to draw stones. Jeff dramatically reads the newly-casted votes, it goes back to four Laura, three Natalie, and one vote left (they don't get to vote this time). As soon as Jeff speaks the words and turns the parchment, Laura's jaw hits the floor, Monica is stunned, Dave looks like he just ran over someone's dog, and Natalie smiles a happy little smile. Shambo is cracking up and John just looks down at the fire, then at Erik. Dave keeps casting glances down at Russell. Erik talks too much, even as a jury member. 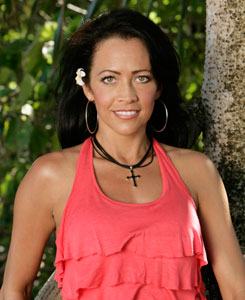 I didn't catch the previews for next week, I kept singing this: