Previously on ... UNCOMMON SURVIVOR; The Bros Before Hoes Alliance was born and elected the puppet government of the Shambo party to leadership, and before you can say, "cat fight," Laura is on the outs. That's small potatoes compared to Foa Foa's problems, as they are the suckiest bunch of sucks that ever sucked. They lose every challenge and have only four people left. It's the Merge, where the show finally starts and we will meet the rest of the Survivors who aren't named Russell. I keep wondering how many Bretts there are going to be. The Foa Foa Four need to come into the Merge strong to make up for the fact that there's eight Galu left. Will Evil Russell hypnotize them all? Will Shambo accidentally set the camp on fire before he can do it? Will anyone die for fourteen seconds? Get hyped!

Morning 19 at Galu starts with Laura picking a fight with Shambo over a canteen that turns into Shambo not understanding 90210. Is this the third time we've heard her tell us how she hates cheerleaders and the popular girls in high school?

Foa Foa gets their tree mail and they are begging for a merge. Evil Russell has to dig up his secret immunity idol because he thinks they may not be coming back. Why does he have to keep being right?

Both tribes arrive at a chest on a beach, and Jeff isn't there. They open the chest to find some snazzy new blue buffs and are told to go back to Galu for a feast. Everyone is laughing, having a good time, while the Foa Foa Four go to work. Jaison lawyers up to the Rocket Scientist. Danger Dave falls for Natalie's charming blonde hair and breasts, and Monica feeds Evil Russell grapes. Oh, Mick was there, too. I'm sure he did things.

Day 19 "Merged Tribe" - They name themselves Aiga, which means, "extended family" in Samoan. Erik is cocky as hell, thinking he's secure with his numbers, his alliance, and his idol. Yeah, he deserves his eventual blindside.

Evil Russell begins to play hard and fast, just like Day 1, except this time he can make promises with the idol. He tries to negotiate with Laura first, and that doesn't work out, which enrages him. I'm enraged with her, too. She's on the outs with Shambo, and more importantly, the Bros Before Hoes Alliance, putting her in jeopardy even with the majority. And now she's crossed him, too. Way to go, idiot.

Evil Russell's next play is Monica and she is nodding, but her eyes say no. After that he goes to Rocket Scientist John, who is very proud that he came to him to show him. Sucker. John also perceives the threat in the Laura-Monica twosome.

It's Shambo's turn to get man-handled by Russell, and he, almost as precisely as Jeff would, asks her if she's worried about Laura. The question sparks a fire in her, presenting a perfect angle to exploit. He didn't even have to show her the idol and she gave him what he wanted. My god. She, "trusts him implicitly" because they're both southern cloth, and just like that, the winds of change are upon Galu and the plan to vote out Laura trickles down.

First individual immunity challenge time! Jeff is wearing a mint shirt. I think it's mint. The challenge is tee ball! Hit the ball into various sections, score however many points are in that section. But, oh wait, there's two immunities; one for the women, and one for the men.

Women's turn! Natalie hits out of the course. Monica, a lefty, scores a 2. Kelly scores a 3. Shambo fouls out, pathetic. Laura steps in and hits to the 4, winning individual immunity on the final round, too. Damn it all! I should have expected a Shambo plan to collapse, though. 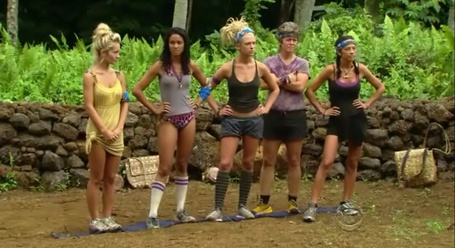 Back at camp, it looks pretty bleak for the Foa Foa Four. Evil Russell wants to take out Monica now, but Shambo tells him Erik and Laura are going to decide who is out. Laura tells Erik about Russell's idol, so he thinks about switching to Jaison. But Rocket Scientist John, Rocket Scientist that he is, makes a push with him for getting rid of Monica to weaken Laura even though she won immunity. It appears to have been sold on him. When the plan is broke to Danger Dave, he's nervous.

Erik goes to lay out the plan to Mick, Jaison, and Kelly, a terrible idea. The way he talks to them irks Jaison, and he begins his plans to get rid of Erik. I respect the way Jaison's playing the game, even if it's not the best way to win.

Kelly goes to Laura, who talks to Natalie about voting out Erik, then they go to Monica. The girls go to Dave, who is immediately sold due to Erik's sudden erratic behavior and it becomes Erik, no matter what. Dave goes to explain to Shambo that Erik goes, and she asks who Erik is. Are you kidding me? Rocket Scientist John grabs Kelly out of a conversation in the camp and tells her, "you will not!" and everyone's flipping their lids like a monkey in a soup kitchen. Splendid. 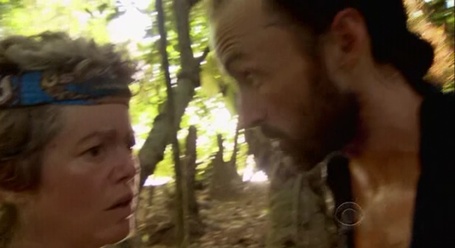 Tribal Council Time! Jeff talks about trust with Monica, and Erik takes his earliest opportunity to belittle the Foa Foa Four. Jaison and Evil Russell shake their heads and he gives him his assessment of their performance so far. Jaison disagrees, citing how much he's overcome. Jeff tells Erik he has to respect the spirit of Foa Foa, but he can barely stop belittling them, warning Russell that if he doesn't fix his strategic alignment in the next few days, something may happen.

And it's votin' time! Evil Russell votes Eric with a smiley face. Jeff goes to tally the votes and Evil Russell plays his hidden idol. There is a twinkle in Erik's eye as part of his plan is hatched. The first two votes to go Jaison, then two go to Erik. Then a third, and the smile is wiped from his face. A fourth shows surprise, a fifth; a scowl. The six vote makes him look around, and the seventh vote eliminates him. A perfect blindside! 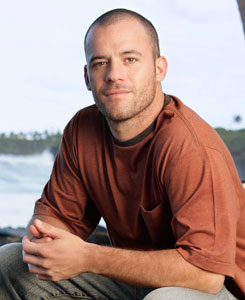 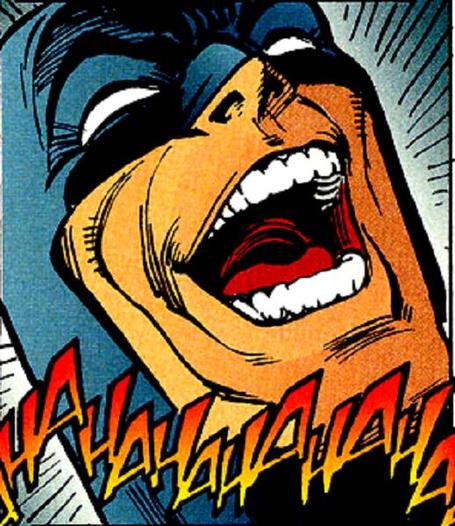 Next time! Evil Russell is without idol and out of friends!