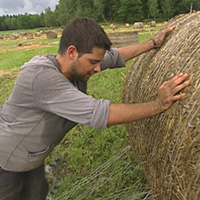 The teams start off racing to Sweden.  They go to an amusement park where they ride a ride and do a ring toss.

Then they all choose to use dynamite to blow up a a bunch of rock and sand to find their next clue.  They had a chance to do something with Viking letters but nobody chose that part of the challenge.  In the dynamite challenge the teams had to fill up sand bags and then connect and push down the plunger to get the explosion.

Meghan bitched at Cheyne the entire time they filled sand bags.  Meghan thought it would be easier to team up on each bag instead of working individually.  Cheyne agreed at first, but his job was to hold the bag open, which he wasn't doing.  It was driving Meghan insane.  She bitched at him, while Cheyne just ignored her and did it his own way.  Very passive aggressive.

All of this wasnot important and  just a prelude to the main event... unrolling hay bales.  This is an unholy challenge that the teams in Amazing Race Season 6 had to complete. Do you remember that really hot girl team that battled the bales for nearly 10 hours before they were eliminated by Phil?  It was crazy.

The teams all recognize the challenge and seem to dread it, but they make really bad decisions on who should actually complete the challenge.

Meghan asks Cheyne who should complete the challenge.  He just looks back her with a blank expression.  He says to the camera, that he thought today was the day that Meghan was going to take the lead.

"Cheyne, Bro, What the eff dude?  Where'd you get that awesome hair gel?"

"Cheyne, this challenge and your girlfriend are not a good match.  She freaks out and gets frustrated filling sand bags or watching you drive around a race track.  Why would you make her do the most frustrating, physically demanding and longest challenge that this Amazing Race has ever known?"

That was a terrible decision because Meghan cried the entire time... like for 3 hours straight.

Another bad choice.  The tall loud mouth gay brother should have done the challenge.  He knew all about the challenge and the technique from watching the previous season.  He needed something to do rather then annoy the hell out of his brother and the viewing audience.  That guy would not shut up.  I felt bad for short gay brother, because I would have been just as pissed off.

I can't believe for a second that Interracial Couple was even considering letting the beauty pageant girl do it.  Seriously?  Are you trying to throw this race away?  Fortunately white guy decided to do it.  He has infinitely more patience than her.

The dad from Montana was a good choice.  So was Big Easy from Team Globetrotters.

I love me some Globetrotters because they have so much fun completing these challenges and wouldn't you know it they found the flag in the hay first.  Also it was Flight Time's birthday so that was kind of a cool side story.

After hours and hours of sobbing and whining Meghan finds the flag and surprises Cheyne.  He says he's proud of her.

Interracial finds the flag next.  Then the gay brother who spent the most time on the farm field and then finally the Dad.

Fortunately nobody was eliminated for the race.