Previously on ... UNCOMMON SURVIVOR; Shambo said she spoke to God, and He told her that Dave was the next to be voted off. But Evil Russell, cunning strategist that he is, told ol' Rocket Scientist John that he has an immunity idol, so he had to convince the Foa Foa Four to vote off John without telling Shambo, who'd never go through with it, not when she'd had her vision. So John is blindsided, but Shambo is, as well. But Evil Russell tells her that John was targeting her and he just wanted to protect her. Naturally, it works.

Day 32 begins with Brett and Monica talking to Jaison on the beach about who they'd vote for. They both say it should be Russell, because of how well he's played the game. But Jaison wants to point out that he's been making decisions, too. Sure you have, kid. He tells us that he's already thinking about getting on the side of the jury, and then tells them about Russell's riches. I wonder which smells worse, he himself or his sad desperation.

Reward Challenge time! Just kidding, it's really the Immunity Challenge! It's a bowling tournament. One frame each. Natalie and Shambo face off to start. Natalie tosses a gutter ball. Shambo knocks down nine for her friends in bowling leagues. Natalie fails to knock down more than that and is eliminated. Brett and Russell match up, and Brett gutters his. Russell knocks down four, so Brett answers with a gutter ball and slips back into the jungle unnoticed. Jaison and Monica face off, with Jaison hitting two pins and Monica guttering. Jaison hits another four, and Monica hits just one, she's out. Mick and Danger Dave match up, and Mick takes out four. But Danger Dave knows balls, hell, his last name is Ball, and he does his namesake proud by striking down the entire Pin family in one shot. Mick can't answer and Dave advances.

Round 2 is Shambo versus Russell and Jaison versus Dave. Shambo rolls first and hits five, then Russell with four. Shambo's next shot misses, and needing two to advance, Russell chokes and gutters it. Jaison steps up and gutters, then Dave shames himself with a gutter Dave. Jaison knocks down seven, and Dave gutter Daves again. It's Shambo versus Jaison for the final. They both gutter on their first roll. Then Shambo gutters again, leaving Jaison needing to hit just one pin. He easily nails it and wins his second immunity. 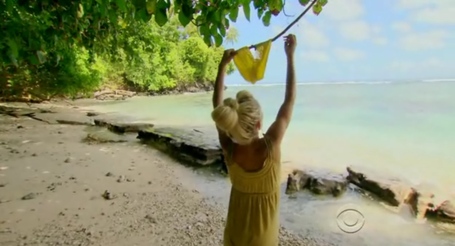 Next is... day 31? What the hell happened? Did we cross over into LOST? Was that a Flash Forward? Moving on, I guess, after/before the challenge, the initial plan is to just go ahead and vote out Dave, because it's what Shambo wants. But Monica gets in Russell's ear, and is actually able to sway him into voting out Shambo instead. It's a great idea, because he knows he can beat Dave. So he goes off to tell Dave that he's saving him, again, and that he, Monica, and Brett should vote Shambo. Dave wouldn't be surprised if it works because the Lord provides. Mick warns Shambo while Russell is standing there, but she's not worried because they always were because she's the Sham with a plan. She does know what a sham is, right? She says if Dave isn't gone tonight, she and Russ are going to have a chat. Unlikely.

Tribal Council!? What day is it? Anyway, the jury comes on and Jeff begins his cross-examination working the angle of asking everyone's voting strategies this late in the game and what it takes to survive. Dave basically lays out the ultimate proposition on Survivor, "You have a better shot with me than your current ally, let's go." Voting begins, Shambo votes Dave, and he votes for her. Jeff reads off the votes, and they all read Dave's name. And with that, the legend of Danger Dave comes to a close, and the show's not even over yet. I'm kinda happy for Dave, he needed a sandwich, badly. 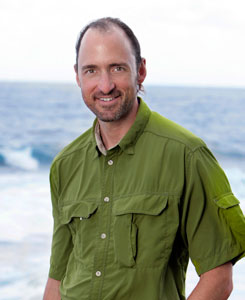 Now we're back to Day 32. Shambo's high-fiving Brett. Mick takes Russell aside and asks him straight away who he's taking with him to the final two. Russell tells him that they need to get rid of Brett because he's nice and camouflage. Russell's also worried by Mick's flightiness.

Immunity Challenge Again! Swim out to grab a bag, then launch it into a basket using a see-saw. Three bags wins. Jeff heightens the drama by repeating that it's been thirty three days. It should also be noted for those readers that are in to this sort of thing; Natalie was having trouble keeping her clothes on at this point. Brett sinks the first bag, then Mick, then Russell. Shambo comes up from second to last and sinks her first bag. Brett sinks his second bag, and Mick is right behind him. Russell sinks his second one, too, but he's not fast enough to bring it back. In the showdown between Brett and Mick, Brett wins out. Monica didn't get a single bag in the basket.

Back at camp, Russell tells Mick and Jaison that he doesn't need to tell them who it is, that it's Monica. Later on, Mick is hanging with Monica and Brett, and Brett starts to turn him against Russell. Mick tells a story about a talking snake that bites. Then he goes to tell Jaison that he's also worried about Russell. While Russell is sitting by the fire, Monica begins a full scale tactical assault on Russell's strategic mind. She tells him that she knows that he can't play the idol past day 36, another rule I wasn't aware of, and that Natalie, no, Jaison told her that he's a millionaire. I think steam came out of his ears. He rushes off to find Natalie, but she swears it wasn't her and convinces him, so they go to find Brett to ask how he knows. Rather than toy with him, like I would, and tell him it was Shambo, he gives up that it was Jaison. Then he immediately goes to find Jaison to confront him. He's livid, he calls Monica a bitch, and he's worried about Jaison, but he loves being fired up. He's ready to throw down the idol at the first hint of danger. They may have just awakened super ultra mega turbo Russell. He could probably vote out two people in a single council, he's just that good. 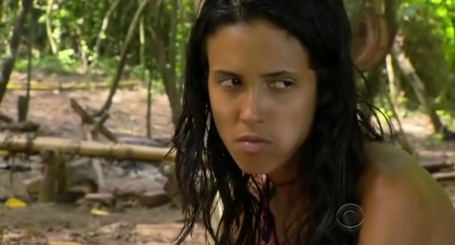 Second Tribal Council Time! The jury is brought back on, and Dave looks like a yoga instructor. Then Russell pulls out his immunity idol and puts it on. It's not long before Monica can't contain her pride that she got Russell all stirred up. Jeff tells him that maybe she learned from him and then turned it around on him, and he admits that if she'd been playing the game like that since the beginning, she'd be in control of the game, and that's what got him there. Her remark, that it's because of idols, is swatted away when he points out the fact that that is playing hard. Mick points out for everyone that four people can't win the million dollars. Voting begins, Russell votes Monica, the stupid, stupid girl, with a bad strategy, and she votes for him. Maybe she thinks it's fake? Jeff asks for the idol, and Russell doesn't play it. Maybe she's brilliant? Then she and Russell exchange votes, with Russell getting three, until she's eliminated. The student made a lot noise on the way out, but it's not as good as a blindside. 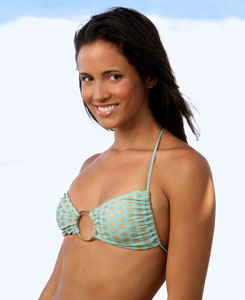 Next time, the lines are completely redrawn.