Previously on ... UNCOMMON SURVIVOR; Dave and Monica were eliminated. Monica made a lot of noise and even got Russell stirred up, which was enjoyable. Since the Merge, the Foa Foa Four had been sticking together because their numbers dictated they had to, but now that they've taken the upper hand, their greed is threatening to unravel their alliance.

There was an entertainment news site that accidentally spoiled the finale of Dexter last week, and there was much raging on the Twitters. As always, the magical jump protects you from being prematurely informed, and the lack of a following here protects us from any real outrage, so we're all safe here.

Night 33, Brett is eating parasites out of Shambo's hair. Russell and Jaison plan to get rid of him. They have to, he's too nice, and he can win an immunity challenge. On day 34, he starts quoting Bible verses. Oh, my. Yes, it's time to do something about Brett. We can't have him winning over people with his seemingly Christ-like charm. It's working on Natalie. Shambo says she needs a haircut and Russell emphasizes the point, saying that she puts pieces of food in it. I think it has its own ecosystem. Whatever it is, it's not clairvoyant. 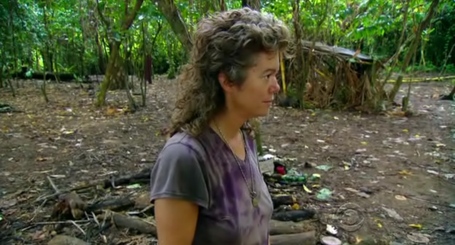 Reward Challenge Time! It's giant Ker Plunk with ropes and coconuts! The six are split up into teams, with Natalie and Russell choosing teams. Natalie chooses Mick and Brett, and Russell chooses Jaison and ends up with Shambo. Shambo goes first and Jeff banters with her about her hair. She drops four coconuts. Mick drops a rope and two fall. While Jaison makes his move, Natalie starts a prayer that causes seven coconuts to drop. Natalie pulls a rope and drops only three. Russell drops another eight and they're way behind. Brett pulls another, dropping a single coconut, and then Shambo drops ten. When Mick takes his turn he drops nineteen, almost evening the score. But then Jaison steps up and drops 48. Smooth. Natalie pulls her rope and drops 58, giving Yellow the lead. Russell then extracts a rope without dropping anything. Brett pulls his rope and drops twenty-three, putting them over 100, and losing the challenge for them. Russell, Jaison, and Shambo are treated to a Samoan feast.

Back at camp, Brett has the idea that they should relax and make their own reward. Mick and Brett walk along the beach together, Mick's pubes were showing. Too much curvature on Natalie's ass, too, because that was also blurred. There's something wrong when Natalie's ass and Mick's bush are treated the same way.

Russell starts to get paranoid because his Natalie is back there with Brett and who knows what he and Mick are doing. He's gonna give her a talkin' to. When he does, she confirms that she's his lap dog.

Immunity Challenge Time! Count random items and use the numbers to unlock a stick with which to break a tile. I always like when they have to raise a little flag or something after doing something strenuous. "Pull this sword from this stone and then cut a wedge of lime for this cocktail!" There's a lot of counting and running around and there's bonus rain. Mick, Russell, and Jaison all start on their numbers. Brett finally joins them. Natalie and Shambo are lost, Shambo probably trying to make an alliance with her new best friends, the pigs. Jaison ends up wrong and heads back, then Mick. But Brett's numbers are correct and his 110 lbs. are enough to win another immunity. 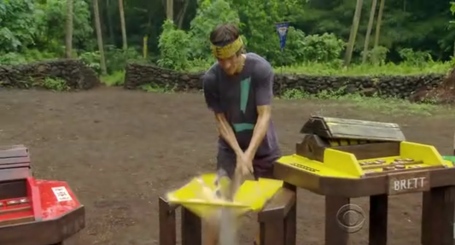 Right when they get back to camp, Jaison tells Russell he wants to get rid of Shambo because she's worthless. This worries Shambo, and she starts interrogating Russell right away. She hassles him over and over. He's finally able to separate from her and is able to tell Mick that she's the next to go. Mick's shocked to be seeing Russell's true colors. He's going to wear the idol in again, but it's the last night he can play it.

Tribal Council! Everyone's shuffled in, and Monica has so much spray tan on that I think I smell toast. Jeff brings up the fact that Shambo's a traitor, drawing scowls from the jury. Russell highlights that at this phase of the game, it's about getting votes for a million dollars. Jaison identifies Brett as a threat because of that fact, and he keeps winning immunity. With him being the only Galu left, and safe from elimination tonight, Russell says it best, "sometimes you gotta vote out people you like."

Voting begins: Mick writes Shambo a prescription for elimination and Shambo writes Mick with a smiley. Jeff retrieves the ballot box and asks Russell if he would like to play any "hidden" immunity idols that are around his neck because this is the last time, but he decides he wants to keep it as a souvenir. A good call. The votes Jeff reads all spell Shambo's doom, and the mangy Marine is cast away to be deloused. 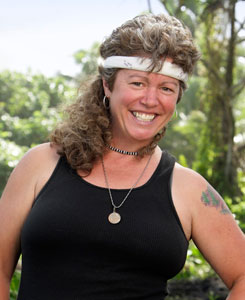