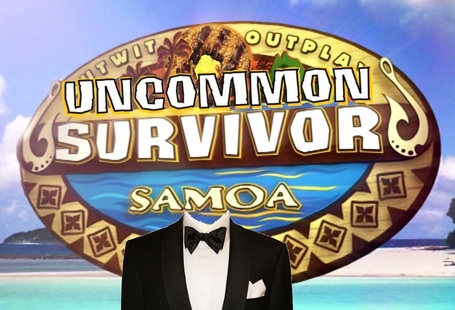 Previously on ... UNCOMMON SURVIVOR; Shambo finally left us because Brett had to go and win immunity. Five survivors remain, from a whole army of Galu only Brett is left. The Foa Foa Four's rally has been a pleasure to watch, seeing them Russell, decimate the overconfident and complacent Galu alliance after the merge has been a treat. May the best man who isn't Brett or Mick win, or Natalie.

All the pressure is on Brett to win this challenge. The only way for any of the Foa Foa Four to have a shot at the million is with him off the table. Russell doesn't think Natalie is going to make it because she can't win in challenges.

Immunity Challenge for the final four: Obstacle course puzzle. It's all neck and neck until the puzzle pieces are laid down. Brett, Mick and Russell take a lead, then Brett and Mick pull away. When the pressure of Jeff yelling in their ears gets to them, Brett wins immunity again, saving him from certain doom. The Foa Foa Four will finally have to be broken.

Russell takes his assessment of his followers. Jaison is the weakest link, Mick can beat him in the vote, and Natalie is cute as a button. Even with three possible people, it's Russell instructing Mick and Jaison to vote against each other. I say get rid of Mick, that blur over his pubes only hints the imagination toward dark places. It has to be more hideous than regular pubes, right? To have that much blur?

Tribal Council Time! Who do you vote out? People you can beat? People you'll get votes over? People cuter than you? Let's hope it's not the last one. Brett envies the Foas because he doesn't like when more than five people can see him at a once. All those eyes on him really creep him out. Mick votes Jaison, Jaison votes Mick. Jeff reads the votes and the last two are Jaison. He didn't see it coming either. In his final words, he announces his support for Brett. And that's Jaison, disappointing right to the end.

Russell makes his move to ally with Brett, and since Russell's the only one who offered, he takes it, giving Russell at least the word of every remaining survivor that they will take him on. He's too good.

The final four go on the torch tour with voice overs from all the fallen. My favorite scenes were Dread Russell's heart stopping and Erik hitting the clothesline.

Final Immunity Challenge! Balance a statue on a pole. Why couldn't they make it something like "reflect light" or "be seen in the open" - things that Brett can't do? At least Jeff has to say, "pole" and "slot" a lot. Mick and Natalie both drop out before long. The wind picks up and each mans statue leans heavily but doesn't fall. They add another section to get to seven feet. They both teeter before Brett starts to wobble, then weeble, then weeble-wobble, then he recovers. Then it's Russell's turn to teeter, but that teetering causes Brett to reteeter, and his statue topples, nearly hitting him in the head. Russell wins the final immunity challenge, giving him the chance to plead his case to the jury. As it should be, the best player gets to the championship.

Mick gives his congratulations to Brett who cries a little. Russell begins practicing his speech to Brett. Mick starts to freak out at Natalie because she and Russell went to get firewood. Really, he's going to worry about that now? I guess he should, because Russell's plan to make up for his agreements with everyone is to force a tie and a fire challenge, giving Brett another chance. Russell is hungry for jury votes and he's so full of himself, he thinks he can win if he brings Brett with him to the finale. I think he's been huffing fermented coconut.

Voting time again! Jeff is able to coax it out of Russell almost immediately that he might take Brett out of respect for his performance in the game and this gets Mick all bothered. Mick and Natalie vote Brett and they give us a bit of suspense before they read Russell's vote; Brett is gone. Erik's whispering of, "Wow, they did it" pretty much says it all.

Day 39 is a San Diego-style breakfast feast. Russell starts to grill Natalie on the questions that will surely be asked. Mick doesn't like Russell's bravado. Mick thinks he actually did something to get here. Natalie tires of his constant babbling as well, but she isn't discouraged. I don't care about either of them, though, Russell played a fantastic game and he should win. I started the season hating him, but he won the game to me.

Jury Grilling Time! Oh man, I wonder if next season I can get a sponsor for this section, someone that grills things. Like the Denny's Grilling Time Recap. Mick and Natalie make their statements, they were nice people and blah blah. Russell lays out every detail of his strategy through the game, basically pointing to the pile of bodies that lay at his feet.

Jaison asks them to tell the truth about who they are, and they all leave out certain details. Then Jaison tells everyone that they're all rich people. A disappointment, even after the end.

Shambo apologizes to America, but for the wrong reasons. She calls Mick "feckless" and says one word to Natalie, "coattails." Natalie stammers but Shambo is too busy cramming catchphrases into her final time in the spotlight. She's voting for Russell.

Brett uses his question to ask Mick out on a date. Mick politely informs him he would like to spend time talking about girls.

Kelly is mad at Natalie for being the winning blonde girl.

Monica finally asks them a question where they have to turn on each other to answer. She's great. She starts a fight between Russell and Mick when Mick says only one thing about him.

Dave asks them what their chances are and compliments Natalie on her game a little more than makes anyone comfortable.

Laura asks Russell to flatter her and he complies.

John asks Mick for his hard sell. Mick's jawline is really working for him tonight. Natalie explains that it was in her best interest to lay low with Russell.

Erik mocks Mick's leadership, telling him he did nothing. He's also bitter about getting voted out by Russell's "unethical" behavior. He also berates Natalie for awhile before telling her she's getting his vote. Did he even ask a question?

It's the final vote! Will anyone do the right thing? Erik votes for Ratalie and Shambo votes for Russell. Jeff takes the ballot box and walks into a wormhole that transports him to present day Los Angeles. Everyone looks weird with all their weight back on them. Jeff reads the votes, it's two for Russell, and two for Natalie before she gets the final three necessary to win and takes the million dollars. I guess everyone thought that standing still so the monster doesn't eat you is the best way to win. 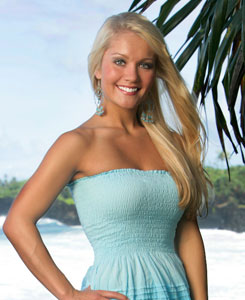 Some notes from the reunion:

Russell wants to cry because he didn't win. Paying her $100,000 for the title of Sole Survivor wouldn't make me feel like I'd earned it.

Everyone's so bitter. Jeez, recognize you were beaten by the best. Bunch of sore losers on that jury.

Jaison sucks. Glad he got another pair of socks burned.

Dread Russell looks worse than he did out there. I can't tell what it is, but I think it's because the top of his head is bare.

It's perfect that Natalie was a member of the Dumb Ass Girl Alliance and she beat Evil Russell out in the end. He does get the Spring MVP title, though.

Officer Betsy's accent makes my skin crawl. Then the thought of her sweating thinking about Jeff makes it crawl even more.

Survivor was named the most influential program of the decade by Daily Variety.

Next season will be Heroes vs. Villains in an All-Star cast. I'm excited!

Thanks for reading this season. See you back here in February!