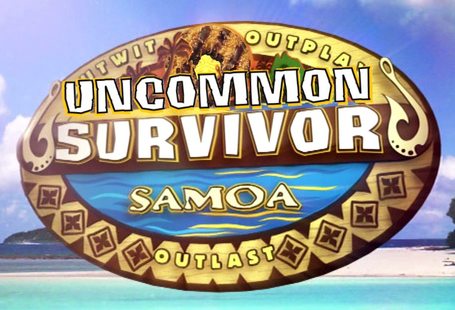 Previously on ... UNCOMMON SURVIVOR; it was a damn recap episode. Just enough new perspective for us veterans, and maybe enough tantalizing tidbits to snag some new viewers. The episode begins with a recap of the events just after the merge. For everyone who's been on board the whole time, Laura has just been voted out due to Rocket Scientist John's decision to flip and go against the Galu vote.

Shambo announces that Medusa has been dethroned. She could not be more wrong. First of all, I don't think Medusa even had a throne, and why are you not wielding her severed head as a weapon with which to turn your enemies to stone? Amateurs. Rocket Scientist John goes through his rationale for the flip, counting on Russell's promise to vote out a Foa Foa member next, the fool. Monica, from her high and oblivious horse, thinks she needs to vote him out next.

Evil Russell wakes the tribe up on day 28 with cold hard cash from Tree Mail. It's auction day! 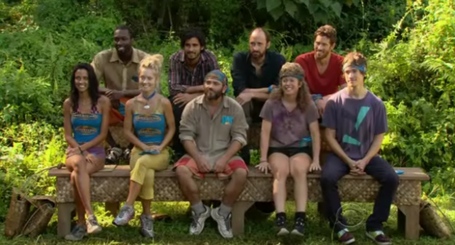 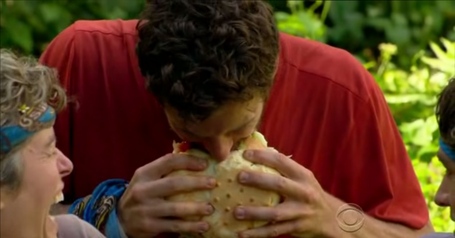 This is a very coconut crab-heavy episode. John sneaks off into the jungle to read his clue. The clue leads him to the mossy rock pile, more than enough to find it. He can't find anything, though, and he thinks it's probably already gone.

Shambo says her goodbye to the chickens, she will see them in Heaven, when she goes. She thinks they understood her. Did you ever wonder how many chicken souls there must be? Or what kind of soup their teens must read for their teenage chicken souls? The chickens were her best friends. But she's got no problem telling other people that she has to boil it to get the most yield from it. jbox, if we crash in a plane somewhere and survive, I promise to boil you to get the most yield, ok? She basically tells Jaison to shut up, because she doesn't know a lot about a lot of things, but she knows how to cook. I would go find some secret papayas at this point. Everyone lets her be, until Dave finally moseys over. Their exchange is excellent, and surprisingly, Dave walks away calmly. Somehow she still thinks that this is him picking a fight, though, and she's lost her mind. Shame we never found out how that "soup" ended up.

Did you know that God made Shambo special? She has clairvoyant dreams. I used to think that that was a property of hair, like if you used a special shampoo. Anyway, God's Divine Intervention decided that Dave needed to be voted off Survivor. I know, I was surprised, too! She walks around the next morning pumping her fists. "Dave's gone!" Evil Russell loves his new favorite windup toy.

Day 30 arrives and it's Immunity Challenge Time! Hold onto your log by the knotted rope. You have to switch hands and move backwards down the rope, so the log will get heavier. Jaison's purchased advantage allows him to go up two knots whenever he wants. Hot day, sweaty people montage. Jaison uses his advantage while everyone's only on their fourth knots. Bad move, kid. Grimace, exhale, wince montage. When the logs get to about a 50 degree angle, Shambo drops hers due to clumsiness. Then Evil Russell drops his due to a weak arm. After 24 minutes, they get to the end of their ropes, no knots to hold onto. Monica falls, then John. Brett drops out, then Mick. Natalie, Dave, and Jaison hang tight. Natalie finally drops hers and it's left to Dave and Jaison, Jaison with the two knot advantage. After a tense stare-down, Dave slips and Jaison's $500 pays off in the form of Immunity. He still played it too early, I say.

Shambo takes a nap while Foa Foa confirms the plan to carry out God's Divine Intervention (vote out Dave), but Evil Russell and John have a secret meeting where John is told that Mick is his sacrificial Foa Foa. While John lays out the strategy and tells Russell he knows he has the idol, Russell realizes that this man might actually be trying to play Survivor against him. Then Russell goes to tell Dave that he's on the chopping block, but he wants to save him. Suddenly, the hype machine to get rid of John starts to crank up. Russell's pretty worried about his mistake. Mick goes to confer with Jaison, and Jaison doesn't think it's a good idea. I agree with him, you've got Dave dead to rights, take him out.

Tribal Council Time! After a brief recap of the challenge, Jeff asks Shambo if she thinks it's easier or harder to get along with people. She's had so many ups and downs, but today was peaceful. She's actually surprised that someone did some strategizing today, and Jeff can't contain himself anymore. I've lost all hope for this lady. Then Jeff asks Dave how he thinks Shambo sees him, then John. He must be spying on them to know those are the two she hates. Or does she hate Monica more? I forget. Jeff asks Mick if someone will be surprised tonight, then he asks Russell, Shambo, and Dave. Finally, he asks John, who says that tonight's vote wouldn't be surprising because the two potential names had been asked already, and they said no.

Voting starts, and Shambo's still voting for Dave, John votes for Mick, and Dave for John. The next vote is for John, and the next, Shambo's confused again, and as John looks around wildly, flailing to pull the knife from his back and meet the eyes of his assailants, it's all over. 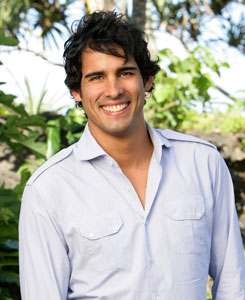 Next time, Mick realizes Evil Russell is going to maul them all.

Also, Mick's hamburger reminded me of this: 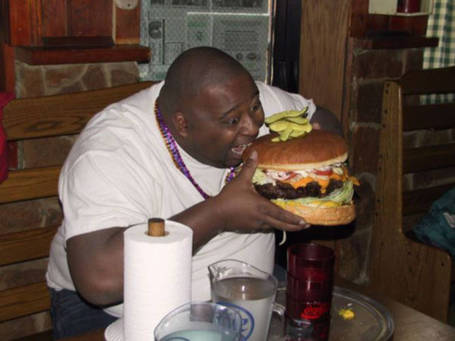