Share All sharing options for: Running in the 2009 Las Vegas Santa Run 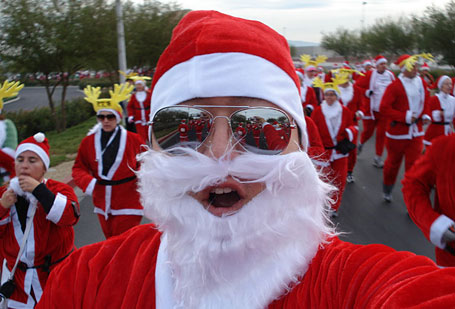 Ever since I found out that Uncommon Sportsman covered obscure and weird events like Man v. Food challenges, and the Krispy Kreme Challenge, I've always made sure to check the site whenever there's something obscure and weird, especially if I was personally a participant in it myself, since I'm all about the obscure and weird.  So this past weekend, I was out in Las Vegas, and this morning, I'm back in Atlanta, but my body's still on PST, and I have the rest of the day off, and I'm curious, so I click onto Uncommon Sportsman, to see if there was any mention of the Annual Las Vegas Santa Run that I took part in.  Well now.

Not only was there no mention of the wonderful charity event, it turns out that I'd been anointed the dubious honor of being an author on this fine website, so what better way to make my authorial debut on Uncommon Sportsman than sharing the story of my experience out in Las Vegas, running in the cold desert, with 8,000 other people dressed like Santa Claus?

More story, photos, and a rich and famous celebrity name drop after the jump.

First and foremost - the Las Vegas Santa Run is an event held by Opportunity Village, a non-profit organization that specializes in serving those with intellectual disabilities, and gives them schooling, jobs, and social recreation services, to integrate them better into the community.  I can't say how many years this has been running since this was my first time doing so, but as much fun as it was for me as a participant, it's not for me to ignore the purpose of the event in the first place.

So the irony is, I go to Las Vegas so often, that the novelty is gone for me, overall.  I've lost thousands of dollars playing blackjack, craps and roulette, and I'm batting a clean .000 when it comes to winning a sports bet.  Seriously, I bet that my Atlanta Braves could beat the Arizona Diamondbacks, only to watch as the Braves not only lose, but that was Randy Johnson's perfect game.  Just two years ago, I put money on the Tampa Bay Rays to beat the Boston Red Sox, only for the Sox to come back from a 7-0 deficit to win it in the 9th.  Heck, this past weekend, I put $20 on the Washington Redskins to pull the upset of the season and beat the New Orleans Saints, and watched some of the most idiotic turnovers and an overtime field goal rip a $314.80 pot out of my greedy gambling hands.

However, a good novelty event, like say, running in a 5K dressed as Santa Claus, certainly piques my attention.  My surrogate brother made the suggestion to me that we run in this event, and before I knew it, I was on a plane and off to Las Vegas, completely unenthusiastic about the gambling and the likely loss of more money, but very optimistic about participating in LV Santa Run. 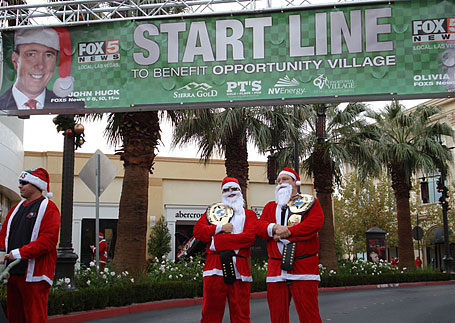 And since I can't do anything normal these days, I thought it would be a novel idea to differentiate myself from 8,000 other Santa Clauses, and bring one of my replica wrestling championship belts.  And since I wasn't going to be alone for this particular run, my brother and I saw it fit to each bring our respective TAG TEAM CHAMPIONSHIP belts.

Here's the funny thing - I pull out a wrestling belt in any other city in the country, and it's a joke that people get.  Ha ha, wrestling is lame, wrestling is fake, cool belt, lame belt, yadda, yadda.  However, do this in Las Vegas, where real pro-wrestlers, boxers, and/or mixed martial artists are known to wander around in the streets, and suddenly, people legitimately think that my brother and I are real pro-wrestlers.  Whereas I thought it was going to be fun and dandy the whole time with the belts, this sudden believability kind of derailed the entertainment.  Just a little bit anyway 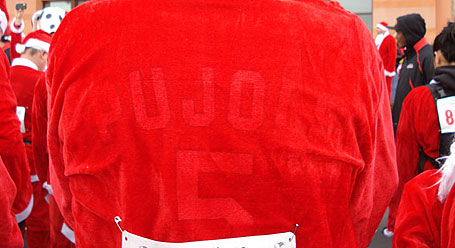 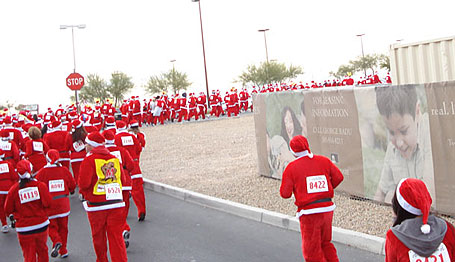 Here's a glimpse of the second bend of the route, and the seemingly endless line of runners dressed as Santa Claus, running around the parking lot of Town Center, which is located just south of the Strip, right beneath Mandalay Bay. 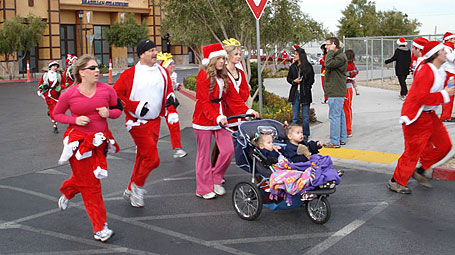 Now I consider myself somewhat of a decent runner for someone who does it for fun mostly, and I'm good for about an 8:20 mile at marathon pace, but all throughout the entire run, I was getting burned by these genetically superior super-parents who were effortlessly breezing past me, and to rub salt into the wounds, all while pushing strollers of their future-bound superior-genetic children in them.  In the end, I finished the 5K in 25:08, which was fine by me, considering the circumstances of the cluttered starting point, and the constant fighting with the fake beard, and trying not to inhale a pound of white fuzz the entire run. 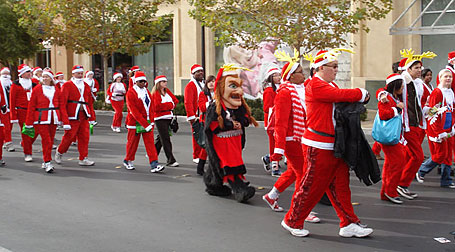 With the run completed, I loitered around the finish area, to simply cool down and enjoy the sights of hundreds of other enthusiastic runners, and seeing what other creative means aside from wrestling belts that others came up with.  Like creepy elf-like creatures. 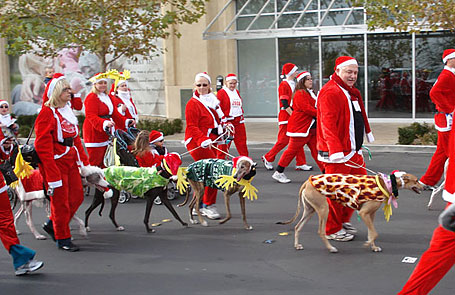 Or dressing up their Greyhounds, and parading them down amidst the runners. 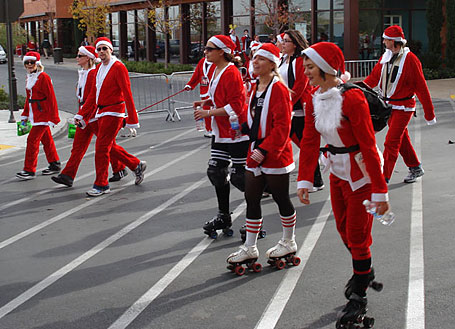 And then we had what I'm guessing is one of the local Las Vegas rollerderby teams representing, or some chicks who were really inspired by that flick "Whip It" 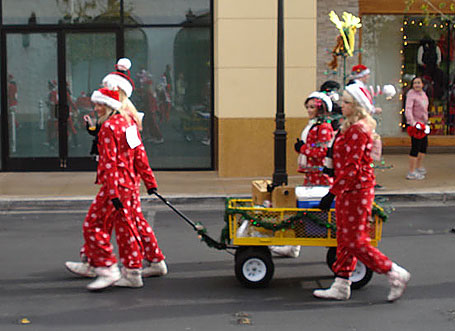 And where you have charitable events, you're bound to have cougars.  Cougars in Christmas-themed pajamas, handing out bottles of water to runners, no less. 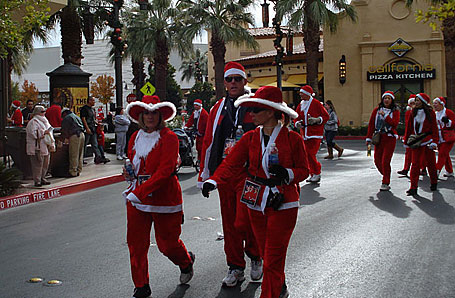 And ditching the traditional elf-like hats that everyone wears, some opted for the more conventional pimp hats instead. 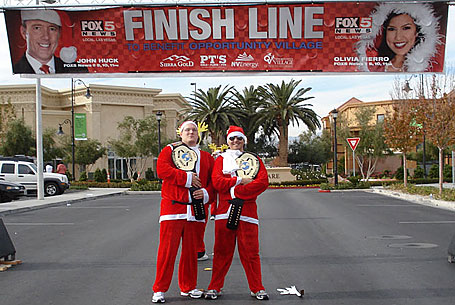 And about 19 minutes later, my brother crossed the finish line, and then we proceeded to get back to the regularly scheduled program of a typical dude Las Vegas trip, where I lost a lot of money, got a little inebriated and lost more money while trying to shamelessly flirt with a blackjack dealer. 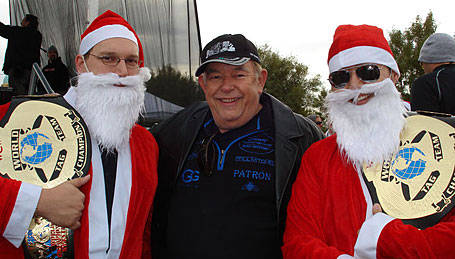 Oh yeah, we also got to meet ROBIN LEACH, which was kind of cool.  Since I don't know if anyone's going to get that, since it seems like assuming that everyone will, will only result in people who were born past 1992 chime in and say "who?," this smooth cat with the silver voice was the host of Lifestyles of the Rich and Famous.

As a whole, the Las Vegas Santa Run was a blast, and I'd do it again in a heartbeat.  And I'd encourage everyone else to join in in future years, since I know for a fact many of my fellow authors and contributors are all in like Southern California to begin with anyway.

Champagne wishes and caviar dreams, everyone.