Ok, I know everyone wanted a preview, but do you read me as the type of guy who does homework? 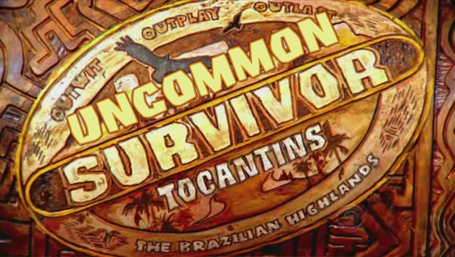 They're in Brazil. YES! I've got Brazilians of Brazil jokes. This is going to be a great season. Brazil is known for its Brazilians of beautiful Brazilian women, world-class soccer, beaches, and those boys who are from there. Specifically they're in Tocantins, the Brazilian Highlands. That is, Highlands that are in the country of Brazil, not thousands of millions of highlands.

I'm gonna spoil this thing faster than guacamole dip and mayonnaise in direct sunlight, so avert your gaze if you have a weak soul.

The survivors arrive in the middle of nowhere on the back of a truck. Jeff explains that they're already divided into teams (Red & Black) and they have 60 seconds to grab whatever supplies are sitting next to them and time starts NOW, GO! Everyone throws random crates and supplies off the truck into two piles next to nearby colored banners. Some of the crates are shattered. When the dust has settled, the Black team has all the water and food bags. Jeff gives each team a map, tells them their camps are a four hour walk away through 110° heat, and they each have to vote someone off this little adventure right now.

This is great, nobody knows each others names! Red team votes off the old lady immediately, coming up with nicknames like, "Granny" and "older lady." Her name was Sandy, she's pissed. I would be, too. Trucked out to nowhere to be voted old and taken away by the Sunset Squad.

After two votes, you can tell the Black team can smell the sick on the blonde girl, Sierra, who confesses that she has strep throat. "Hi, my name is Sierra and I'll be playing as the Infected." The first five votes eliminate her and she apologizes for having a fever of 102.

Twist alert! Sandy and Sierra aren't actually eliminated. They've only been exposed as unpopular outcasts and now know everyone hates them most. Sandy is thrilled and celebrates. All the cool people get to walk and carry supplies while the outcasts board a helicopter. Suckers.

Getting to know the Red team; the southern guy announces he likes Speedos and the guy with the glasses ripped the seat of his pants and made us aware of his fear of southern guys.

Meanwhile on the Black team, the black guy (did they do that on purpose?) confesses that he's in the National Guard and just got back from Iraq. "Coach" takes a moment to be a blowhard and have a bro moment with Brendan.

The outcasts arrive at their respective camps early to find tree mail explaining they have a choice with their time before the others arrive: find a hidden immunity idol or start building a camp. Sandy starts looking for an idol, figuring nobody's going to like whatever she builds and she has to, "look out for number one (her)." Sierra lands and makes everyone aware that her team don't know nothin' 'bout her and she has, "alot alot of good strengths." She chooses to build a shelter.

As the Red team arrives, Sandy shoves her tree mail in her bra. I'd like to take this time to announce that Sandy, who is a bus driver, is completely nuts, in my amateur opinion. I think she talks like that all the time, regardless of whether or not the camera is with her.

The Black team is arrives at camp after dark to find that Sierra has built an 8 person shelter and everyone's appreciative. Rich kids have everything.

Day 2 starts with the Red team blabbing about building a camp while Sandy sneaks off to find the immunity idol. She finds a clue that says she needs to go ten paces to the lone palm tree. She doesn't know what a pace is.

Day 2 for the Black team begins with the search for water. Mormon Tyson doesn't hesitate to get naked for attention.

Immunity and reward challenge: Teams have to go into the water and get some planks to build some staircases... honestly, when did these get so complicated? They used to have something to do with the culture of the locale, too, in some esoteric way.

Sierra and Sandy sack up for their teams and lead during the challenge, Red builds a slight lead, but Black keeps their cool to recover the win. Black gets fire, Red goes to vote.

Back at Red, bossy girl in the red dress with the cowboy boots, Carolina, gets taken down a notch after she tries to get everyone to clean up around camp after the defeat. Sandy wanders off to figure out what a pace is as evening sets in.

Red team arrives at tribal council to chat with Jeff. After hearing her speak for a few moments, Jeff actually asks Sandy if she's crazy. She is, Jeff. Carolina is asked some questions and everyone has to listen to her talk for thirty seconds. It proves to be her undoing as she quickly became more unpopular than the old crazy bus driver lady. I'm not kidding. Carolina is voted out and the Red team is gifted with fire. 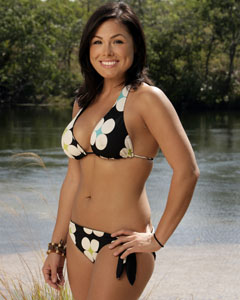 Entertaining start. Next week, the teams will wrestle in the rain.