The Amazing Race start was at Los Alamitos, CA.  Phil said go and ten teams took off on their race around the world.

The first stop was Switzerland where each team took a series of planes and trains to get to a church where they signed in for the next days events.  The next day event turns out was the world's second highest bungee jump, the one from the Bond movie GoldenEye. 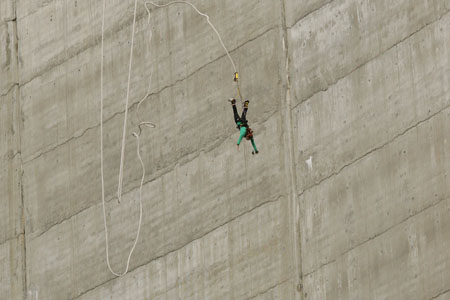 I'm pretty surprised that everybody did the jump without too much stressin'.  I'd like to think I could make the jump but I don't know.  I'd probably crap myself just looking over the edge.

Next the teams headed to Interlacken, Switzerland where they had to hike up a very slippery and steep grass hill.  Let me stress that it was really steep and really slippery.  The teams carried these crappy wooden cheese backpacks, that broke instantly into a million pieces if the team fell or looked at them wrong.

A lot of the teams had to chase cheese wheels down the hill.  The one thing I couldn't understand is why teams didn't use this to their advantage?  Why didn't they all just roll the cheese down the hill instead of trying to carry it or slide down on their butts.  It would be so much quicker and easier to just retrieve the cheese at the bottom.  It obviously wasn't against the rules because a few teams did it by accident. 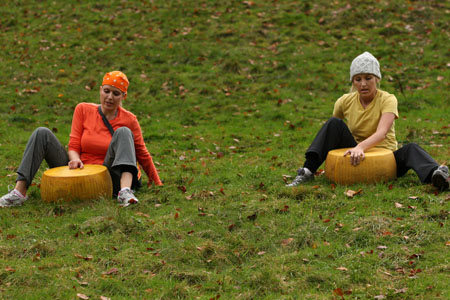 At the end it was Preston and Jennifer who were just beat out by the Flight attendants.  It's a shame too, because I'd rather see Jennifer jogging around than either of the Flight Attendents.

In first place was the deaf guy and his mom.  They did a good job.  I'm probably going to have to do another post to talk about each team individually.