Last time on.... UNCOMMON SURVIVOR: we met everyone, we laughed, we laughed some more. Carolina got voted out by being more annoying than a crazy bus driver named Sandy. So forget her, you'll never hear about her again. Fifteen are left, whose torch will be extinguished tonight?

Brace yourself for Uncommon spoilings the likes of which are seen only twice a week in this very place!

Sandy is grateful Carolina didn't know how to play her cards and wastes no time cordially thanking the people who have already told us they're getting rid of her next. It's as awkward as it sounds.

Start of Day 4: Oh, look! A hummingbird. Where was I? Oh, yeah. Jalapao, Red team, is eating various plant  life but the men want delicious proteins. Joe, who is in real estate sales, is dead set on eating termites today. They kick over a termite mound. Sandy finds the brain bug and Spencer, a student, bites the head off while onlookers gag. Joe and Steve finish it off, not unlike the scene in Lady and the Tramp (not really).

Day 4 for Timbura, Black team, starts with them not making a fire. Sierra goes to the one person who didn't vote for her, Brendan, an entrepreneur, which is a like a blogger without a blog, and tells him there's a hidden immunity idol on the beach. Brendan conspicuously sneaks away with the pariah where she finds a stick in the sand similar to Sandy's. She reads the clue, walks several paces away, where her and Brendan begin excavation. When they're gone too long, Debbie goes to find them, discovering Brendan hip-deep in a hole, but Sierra quickly tells her they're building a fire pit for a bonfire later and Debbie buys it. I think I already hate her.

Day 5 at Timbura begins with breakfast discussion, how many pots to cook with or how much pot to cook with, I'm not sure because Coach is complaining about the food that hasn't even been cooked yet. After arguing with her, he tells us that Candace has a personality like his, where "she looks to find faults in other people." He does it because it's his job, though, so it's cool. Candace, who is an attorney, is an intelligent person and she stops herself from executing a ninja attack on his ego. Coach tries to charm her with a lame apology, she's not charmed.

Day 5 at Jalapao starts with Taj telling everyone what her husband does, more importantly who he is. He's Eddie George, some mainstream sport dude, you guys might know him. Spencer is stoked, Stephen doesn't know who that is, and J.T. the cattle rancher figures that means she has a lot more money than he does.

Rain begins to fall at the immunity challenge, which is some kind of full-contact soccer-basketball hybrid in knee-deep water. First to score three wins. Man, there is so much wet breast out there, it's like a Corvette convertible hauling Foster Farm's through a car wash. Candace puts Timbura up one. Sandy drags Erin to the deep end to pull her top off while laughing like a crazy bus driver in the rain. She succeeds. Tyson shakes off J.T. and scores for Timbura again. Round 3 is all women; Candace, Sierra, and Erin vs. Taj, Sydney and Sandy. Four of them meet in the middle and the blurs start flying. Taj picks up the ball like Eddie George, breaks a tackle from Candace after some hot scuffling, and she's off to the end zone, but she misses her shot. Sydney gets a rebound and puts Jalapao on the board. Jalapao evens it up in the fourth round with another shot by J.T. In the match point round, there's more hot scuffling, several missed shots, and Steve wins it for Jalapao after casting aside Sierra like a 90 lb. model. A nice come from behind win.

Jalapao sends Brendan to Exile Island, Jeff reads a note that lets him bring someone from the winning tribe, he chooses Taj. Jalapao wins fishing gear, and we win three more days of Sandy, at least. J.T., who is a south Alabama cattle rancher, knows how to fish, and Stephen, a corporate consultant, has fallen in love with him.

Brendan and Taj find Exile Island. There they find two urns with a sign that says, "You must each choose an urn" but there's only two urns so somebody doesn't really get a choice, now do they? Brendan's urn, which he did not choose, has a clue in it that tells him to read it in private. He goes off to read it. It's actually two clues. One tells him the hidden immunity idol is in the tribal homelands and he doesn't seem to know where that is. Another clue also allows him to switch tribes when coming back from exile, which is an interesting twist. Someone could definitely avoid the axe with that move. After some pestering by Taj, he shares the first clue with her and she immediately knows the tribal homelands are where their camps are. They bond.

Back at Timbura, Candace begins to make the case for Coach's elimination. He didn't do anything in the challenge and I think he's a stupid face. Debbie runs to tell Coach, and he now he's voting for Candace. It's official, Debbie is the enemy. Candace has great breasts. Wait, what? Brendan returns and tells everyone that Taj got the clue. Coach spreads his intent to vote out Candace and she still thinks everyone's voting for Sierra.

At tribal council, after a short discussion involving how useless Sierra is, Jeff gets everyone on edge by talking about trust. He could make a penguin sweat.

The votes are read off, first is Candace. Second is Sierra. The remaining votes for Candace pile up, she winces each time her name is read. I'm disappointed, she had that hot Survivor glow going on already and saw through Coach's bullshit. Jeff congratulates them on the blindside. I curse them all.

In the final scene, they show each person holding up their vote with Candace's last confession. Jerry wrote "CANDANCE." 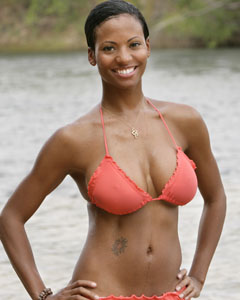 More pics of Candace Smith are at her website. This gallery is titled "Fashion" but I think she should call it "Skin."