Share All sharing options for: ESPN The High School 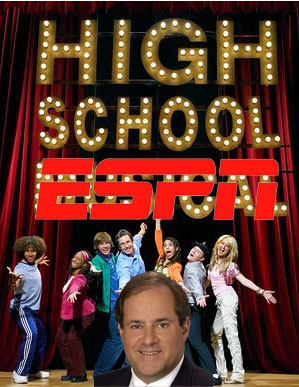 Is our kids lernin'?

ESPN and the New York City Department of Education are teaming up to create a new high school focusing on the business side of sports.

The four letter network is here to make sure they is.

The Business of Sports School, or BOSS, will open in September with 81 ninth grade students.

The school plans to emphasize real world skills through mandatory internships at companies like ESPN The Magazine, ABC Sports, and VitaminWater.

The school is part of Mayor Michael Bloomberg's push to modernize outdated vocational or trade schools.

Well ain't that fancy? Is this the beginning for a new breed of sports agent? Is this going to become some kind of Scott Boras factory? Can the four letter even get through to today's youth? All they seem to be interested in are those X-stations and Playboxen, and those franchise management simulators don't seem to be very popular when there's not an actual game included.

Here's to the four letter for trying to revitalize that cut-throat business savvy of the 80's, as long as we don't have to endure more of that insufferable Jonathan Lipnicki again.