Previously on.... UNCOMMON SURVIVOR (keep practicing your Jeff Probst voice, it pleases me)

The secret cross-tribal alliance has taken flight, despite a shaky take off. Mrs. Crabtree aka Sandy was voted off at Jalapao's first opportunity. I think I'm going to miss the crazy old broad, the only other person that's half as crazy is Coach, and he's just awful to listen to.

Stand by for spoilers rivaling that of a neon green 1985 Honda Civic with a coffee can for a muffler and a body kit made of Bondo.

Jalapao Day 13: Taj explains the mystery behind her vote for Joe, she didn't want to write Sandy's name down. Well, ok, whatever lets you sleep at night, lady. She is hopeful about the alliance. She and Stepehn go find the hidden immunity idol hidden in their tree mail post. She gives it to Stephen because he has pockets to better hide it, and he tells us that it's his precioussssss. This is going splendid.

Timbura Day 13: Everyone splits up for morning duties, and Sierra breaks back to cap to talk to Brendan about her time at Exile. Brendan is excited that the plan is working and it's still a secret. Sierra is proud of herself, she appears to have an edge in the game after starting as an outcast.

Reward challenge time! This is straight out of college hazing rituals, get a tribe member dizzy using a spinning platform that is sort of like an oversized pull-string spinning top, then make them try to walk across a thin beam. First dizzy, emaciated carcass to cross the finish line wins the round. The weight of the survivor being spun will be the determining factor here. First team with three across first wins reward. The reward is the Charmin Café, which is either product placement for Charmin toilet paper, or a coffee shop featuring a bunch of asswipes. In round 1, Joe pulls Taj and Brendan is pulling Tyson. Tyson's wearing a lavender V-neck shirt and looks like he's into granola and bicycling. Both competitors get off their tops and list lazily to the left. Arriving at their beams, Taj takes an early lead but falls off her beam and has to start again. Tyson takes his time, letting the dizziness wear off, and wins the round. Round 2, Stephen pulls Spencer, Coach pulls his favorite girl, Erinn. Coach spins the crap out of Erinn, pulling the rope and running as fast as he can. She gets off and starts slowly, but she falls and has to restart. Spencer, who is less dizzy, takes his time, and after falling once, restarts and completes his run, evening the score. Round 3: Joe spinning J.T., Brendan spins Sierra.  They both shakily approach their beams, with Sierra inching her way ahead, but she falls, giving J.T. the time he needs to cross. Next round, Stephen pulls Sydney, Coach pulls Deborah. Sydney hurries off but  falls and has to restart, but Deborah isn't moving fast enough, and Sydney runs across faster this time to seal the win for her tribe. Brendan gets selected from the losing tribe for Exile and picks Stephen to go with him. Tyson is concerned at the amount of exposure Brendan is getting to Exile and the other tribe.

The Charmin Café is a hut in the jungle, complete with outhouses and a full spread of pastries and coffee. The tribe bonds while eating and they find some letters from home. Everyone cries happy tears and shares their good tidings from home. What they don't show is everyone acting like those cartoon bears from the commercial, wiping their hindquarters on national television, leaving little bits of paper behind. I silently thank them for that.

Back at Timbira, the survivors discuss why Brendan chose Stephen for Exile. Coach has caught on to the fact that there is probably a secret alliance going into the merge. All of a sudden, Coach is a meteorologist, predicting that the changing winds mean a storm is coming, but it will probably break over the horizon. In the next scene, it's pouring rain. Erinn is all over his phoniness, telling us she wouldn't be surprised if, after this was all over, Coach revealed himself to be an accountant who's never left Nebraska.

At Exile, Brendan and Stephen bro it up. They talk immunity idols while sharing a long walk on the sand dune.

Hey look, a capybara. That's a rat the size of a pit bull. Sydney tells Spencer about her crazy dream, (omg, so random xD), and she asks Spencer if there's any girls in his life. Spencer shyly skirts around the question, and during a confessional, admits that he's gay and he's not going to live out loud so that he can blend in. He's afraid that J.T., a southerner, might think he's icky and want to vote him out.

Immunity Challenge! Slingshots into butterfly nets! Catch a ball launched from either tribe, score a point. First to five wins. J.T. scores the first and second points while the other team drops. Joe hurts his knee on the second volley. Brendan snags one to get his team on the board and then snags another to even it. J.T. catches a third ball, but as he falls, he loses a tooth. He pulls out the fragment and looks at it. Jeff says "Aww F&$k" but I swear, they censored it. J.T. examines the tooth and then flicks it away, telling Jeff, "It's only half of it." Jeff wants to find it anyway, and they do. Jeff puts it in his pocket. Someone's getting a visit from the Tooth Fairy tonight! In the next round, Tyson comes close to making a catch, but drops it, and J.T. makes yet another catch. Southerners don't even need teeth! With the score at 4-2, Tyson snags two in a row to tie it up. In the match point round, Tyson snags his catch and J.T. drops it, giving Timbira immunity. Jalapao hangs their heads. The toothless southerner almost carried the day, but in the end it wasn't enough. Jeff gives J.T. his tooth and sends them back to camp to prepare for Tribal Council.

Back at camp, Taj makes Spencer's underperformance apparent. While the group bathes in the river, Taj rants and raves, and singles out Joe for never taking her aside to talk. Then she storms off, leaving the people she just caused a scene in front of to talk about her. Stephen considers sending Taj home without the idol after the explosion. She trusts Stephen, though. Spencer goes down to the river just as J.T. is talking about voting him out. It turns into a verbal stand off, resulting in J.T. telling Spencer it's between him and Taj.

At tribal council, Jeff probes (hehe, Probst) around and Taj talks about her outburst. Spencer talks about feeling like his performance could impact his status in the tribe. Jeff asks Taj about her time at Exile. Joe can't decide whether or not she has the idol, but says he believes she doesn't.

The first two votes are Spencer and Taj, who voted for each other, but the final votes spell out Spencer's fate, as he is eliminated.  It turned out the entire tribe voted for Spencer, so the secret cross-tribal alliance remains safe. 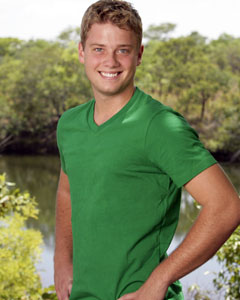 In TWO WEEKS, that's not next Wednesday, but the one after, the next new episode airs. It promises Coach being a jackass and Tyson seizing the opportunity to be naked... again.