Team Asian Lawyer had the lead to start the first leg of Episode 3.  They arranged flights leaving Munich on their way to Bucharest, Romania, but their huge lead was quickly lost when their jet had technical problems and had to return to the airport.  Suddenly all the teams were back together and mostly on the same flight.  I take that back, one team wasn't with the others but we'll get to that later.

In Bucharest, the home of Olympic Gold Medalist Nadia Comaneci, the teams had to go to the gym where she practiced and learn a series of exercises.  Let's not forget that they had to wear leotards... 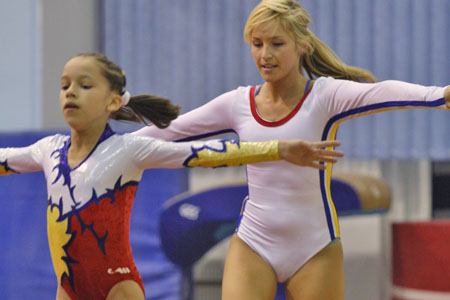 Get your arm out of the way, little girl!

Surprisingly the NFL Cheerleader didn't look quite as good in the leotard as one might have hoped.  Not so surprisingly son from gay father-son team was not looking good.

None of the teams had too many problems with the floor exercises except for Team Asian Lawyer.  The girl didn't know how to do a cart wheel or a somersault?  Isn't that all girls do growing up?  I don't remember a time in elementary school where girls weren't doing cartwheels.

From there the teams made their way to a pit stop.  They had a choice of going to Dracula's castle and pulling locked coffins down a hill, unlocking them or helping a bunch of gypsies move their garbage to their new home.

Why on earth would any team choose to help a bunch of gypsies move?  They had to pack a car frame onto the back of a horse drawn cart.  Surprisingly half the teams moved their piles of crap for them. 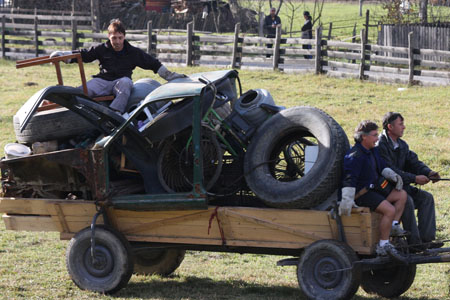 Amanda and Kris, the really pretty team from San Diego lost their money and passports while helping the gypsies and who did Kris blame?  He blamed the gypsies, you know that's what Hitler did.  Oh but wait it was his fault he left his fanny pack in the horse drawn cart, all is forgiven gypsies.

Team Asian Lawyer chose the Dracula challenge and hiked miles the wrong way on the wrong marked path.  Old brother wouldn't admit that he was wrong and wanted to follow the trail as far as it would take him.  Finally he broke down after the team hiked over a few mountains and agreed to go back to find the real marked trail. 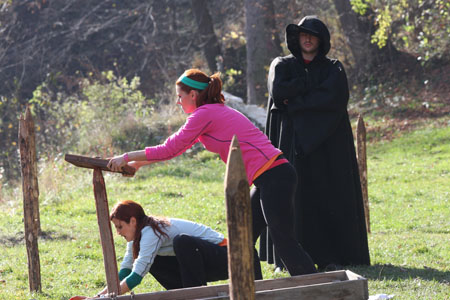 Dracula, get your eyes of Team NFL cheerleaders asses!

The Dracula challenge consisted of moving and opening a locked coffin and then impaling their boxes on a wooden stake, while Dracula watched.  It was just as kinky as it sounds.

In the end Team Asian Lawyer really screwed up today and would have been in last place if Old Recovering Drug Addict and his Wife weren't like 6 hours behind because they missed flight at the beginning of the episode.