The latest episode starts with all the teams leaving by cab on their way to Siberia. I'm beginning to think that Team Midget Stuntman isn't so smart. They never seem to have any idea what is going on. They borrow their cab drivers phone in an attempt to call the airline to book tickets to Siberia, in some random way they actually end up calling the cab driver who is chauffeuring around Team Red Head Cheerleaders. Wouldn't you know it, those naughty minxes pretend to be the airline and tell them that there is no room for them on the next flight. Team Red Head Naughty Cheerleaders think they are hilarious and Team Midget Stuntman are just confused. I would have asked the stuntman "What are you eating under there?" and when they replied "Under where?" I'd laugh hysterically and say "OMG! Gross, you're eating underwear!"

All the team take different flights to a Hydro-Electric dam in Moscow. When Team Red Head Naughty Cheerleaders saw it they were all "Dam! Those must have been some big beavers that made this!" The clues were waiting inside the facility and each team had to travel to an old church where they would be faced with a Detour.

In the detour you could either stack a metric f*ck load of wood or make and hang some wooden shutters. Surprisingly everybody chose the wood stacking, probably because they thought it would just be mindless work. The only problem is that most of the teams had trouble balancing the wood stacks and they'd collapse just as they were about to finish. It would have been frustrating for sure but instead of rebuilding they decided to switch to the task of the detour. 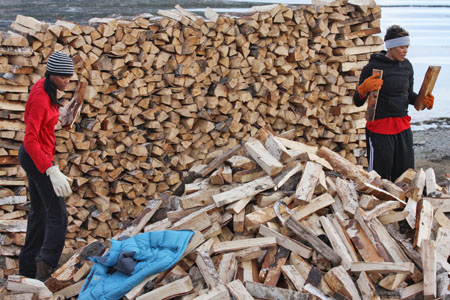 Meanwhile Team Red Headed Cheerleaders are the man haters of this season. Last season we had Team Divorce, but the Cheerleaders were complaining that San Diego Chris was doing all the work. "She’s doing nothing while he builds the thing. We don’t have any boys helping us." Later in the episode they kept wise cracking that they were able to compete without the help of men. Jeez, what are they so bitter about? The Sugar Daddies looking at younger women now? Don't worry you've got a Deaf Kid that has the hots for you. 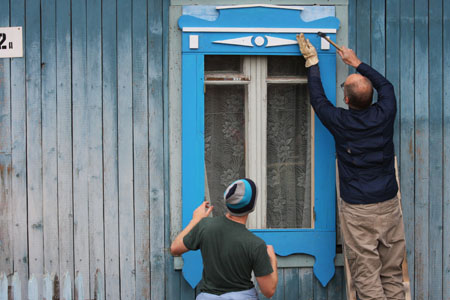 After completion of the task each team was faced with a new feature on the Amazing Race, the Blind U-Turn. Teams could decide if they wanted to anonymously make another team do both tasks in the detour. Team Deaf Kid who seems like a really nice guy when he's talking to Hot Naughty Red Headed Cheerleaders made a cut throat move and applied the wrath of the Blind U-Turn on Team Pretty San Diego Couple.

While the Blind U-Turn did suck, Team Pretty San Diego Couple had already finished about 3/4's of their wood stacking before a portion of it collapsed, so it wasn't like they were starting fresh.

All the other teams traveled to an amusement park, that looked like an amusement park you might see in Communist Russia. One teammate had to ride a bob sled ride and memorize 7 letters along the way. Of course Team Midget Stuntmen had to ride it twice in order to get all 7 letters. Once the team member got the letters they had to put them in order to spell a Russian playwrights name. It was obvious to me at least that the answer was "CHEKHOV" 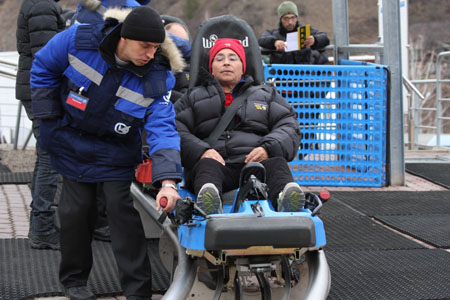 I really felt bad for the Deaf Kid who had a small break down when trying to unscramble the answer, but he was totally giving up instead of just trying a bunch of different answers.

After the completion of the task the teams headed for the pit stop where "the last team might be eliminated". Of course Team Midget Stuntmen didn't have enough money to pay for their cab. How could that be when every other team was able to pay for it? One of the stuntmen offers the cabbie his watch. The cabbie points to his own watch which was a Rolex, so he probably didn't need no used stuntman Timex.

Team Flight Attentant ended up winning and Team Pretty San Diego couple ended up getting the boot, which sucks because next week a team member is going to have to run around in their underwear. 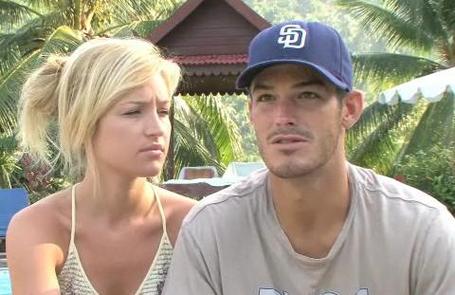