Previously on UNCOMMON SURVIVOR, Coach and Brendan butt heads over leadership and Tyson taddles tales of cross-tribal fraternization. Jalapao lost the immunity challenge, and Sydney, the camp flirt, was voted out by the secret idol alliance of Taj, Stephen, and J.T. Now it's just those three and Joe. Going into the Merge, they're at a disadvantage numbers wise, but they hope to tap Brendan as an ally.

It's Good Friday! I'm not religious, but Good Friday sounds like a great day. Celebrate with a comment and a Cadbury egg. Come on in!

Morning 19 at Timbira begins with a theatrical intro where Coach does yoga in the river and meditates for 10 minutes, then talks to the camera for probably what was a half hour, from which they were only able to extract thirty seconds of coherent blowhard material. Then he walks around the camp fire and gives everyone back rubs. It actually works on Erinn. Brendan tells a Coach story where Coach claims to have started "the Samurai thing." Coach: he coaches soccer, he coaches life, he conducts imaginary symphonies, and he invents trends dating back to the 9th century.

Over at Jalapao, Joe's leg is getting more infected by the second. I just wanna throw hydrogen peroxide on it, I know it will sting but good god man you're gonna lose a freakin' leg on reality TV. He says it's getting better, but he's limping and laying about more. He's not going to be at full strength for the challenge and if a merge doesn't come this time, they'll be down to three.

Tree mail arrives with another clever rhyme and some kind of dream catcher, with promise of feast. Taj says she get excited when she hears anything that starts with an F. Wat. J.T. is pumped and ready to start the ballgame. Both tribes arrive at the same time to a feast laid out on a table. Welcome to the Merge! No more jalapeno or timber, make up a new name, design a new flag, and go live at Timbira's old camp. Coach gets a lot of camera time to talk about his new rivals, Stephen and J.T., the latter of whom he is secretly in love with. He actually tells him he's a symphony conductor. Just as the new tribe decides to call itself "Forza," because Coach says it means, "strength," Sierra abruptly changes the conversation to asking the former Jalapao members why they voted out who they did in their last two councils. Awkward stares are exchanged before Joe and Stephen feed her some "I don't knows." J.T. is hoping to find a crack in the former Timbira tribe.

When everyone arrives back at the camp, some remodeling is planned for the shelter and everyone tries to feel out their new roles. J.T. and Coach end up fishing together. Coach thinks they're both warriors. J.T. said it was 15 minutes before they started talking strategy and spills his story to Coach, that Brendan has an idol. Coach goes and tells Tyson and they plan to join forces with J.T. and Stephen to vote out Brendan.


Tyson finds Stephen, and a new alliance is formed against Brendan.  J.T. and Tyson bond over fishing and share a bro hug. Tyson says he doesn't believe a word Brendan says, but says some very sexually aggressive things about what he'd do to Brendan that I'd dare not repeat. "Whispering sweet nothings." This is one repressed Mormon.

Later on, Tyson goes to "find firewood" with Debbie, leaving the original four members of the secret cross-tribal alliance alone around the fire. But they're not even making eye contact with each other. What the hell is the matter with these people? Two idols between them and they're gonna be the chess club at the spring dance. Taj and Stephen sneak away to discuss what's going on, they're scared that the alliance is broken. Brendan thinks it's all cool and laying low. Tyson brings Debbie in on the anti-Brendan legislation, and as Brendan walks up on them, Tyson pretends to ask him what the plan is.

Joe and Erinn sneak off for flirt time and decide they want to find the two hidden immunity idols. Good luck with that, kids! They actually find the empty hole in the tree mail post and decide Brendan or Sierra have the idol.

Challenge time! Endurance challenge, hold on to a pole for as long as you can. Stephen and Joe begin struggling immediately. I understand Joe's problem, he's got the bad leg, but Stephen is out first anyway. When Joe goes to sit on the bench by Jeff, they show more of his leg. It's so swollen, it looks like bone is punching the skin. Taj slips, then Brendan, then J.T. Brendan falls, then Taj, then Erinn, all in a row. Coach, Tyson, and Debbie haven't moved at all. After 20 minutes, J.T. is struggling to stay up, but eventually drops. Since it's only former Timbira left, Coach climbs down. Sierra loses her grip and slides down like a fireman, scraping her arms and legs. With Debbie and Tyson left, the time passes 30 minutes. Debbie eventually slips, giving Tyson the first individual immunity.

The medics are finally called in for Joe. It's a lady medic. She tells him his leg is almost infected to the bone.

Back at camp, Tyson hams it up. He's so in love with himself. J.T. and Stephen walk off from the group at camp, and Tyson spreads a fake plan to vote off J.T. He hates Sierra and tells us about his nights spent spooning with his arch-rival, Brendan. Stephen and J.T. talk about their options on either side of the alliances and as other groups split off for chores, the plans and conspiracies start flying.

Brendan is a little spooked and thinks he might have to play his idol. Stephen and Taj talk about voting him out because they haven't talked to him. J.T. and Coach bro it up at the fishing hole. Later, a new plan is hatched by Stephen and J.T. to split the vote so Sierra will be voted out even if Brendan plays his idol. Tyson relays it to Coach, and Coach tells us how proud he is of his plan to split the vote. He's going to be the dragon slayer. He's really loving this dragon metaphor.

Rain begins to pour. Jeff comes walking out of the jungle, no umbrella, and... are those cargo shorts? They are! Jeff explains that Joe's leg was too infected and that he is being evacuated. As a result, no tribal council. All that planning for nothing. Jeff disappears back into the jungle and everyone somberly stares into the fire.

The closing scene is Joe getting a helicopter ride. How fun. He tries to flirt a little with the medic on the way out, too. Good man. 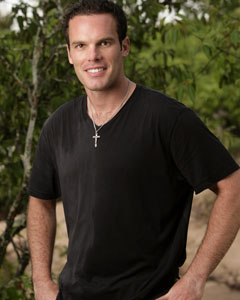