Previously on UNCOMMON SURVIVOR: The Merge happened! It's a brand new ballgame! Six Timbira plus four Jalapao equaled one Forza. With the scheming and planning flying at a maddening pace, Brendan was in line to become Caesar on the Senate floor. But it was all for naught, as the medics were called in to evacuate Joe, whose leg had fallen victim to infection.

Please keep your hands and arms inside the thread, lest you end up like Joe. And don't think we'll provide a medic or a helicopter ride, either.

Night 21: Tension is high because everyone was ready to pull the trigger on their best laid plans before they learned Joe was turning into one of the infected. Coach tells one of his stories where he supposedly was dropped in the Amazon by military helicopter and a native tribe kidnapped him, tied him to a stake, and beat him senseless. Somehow he escaped, though. Mind you this story only somewhat believable because it's about an indigenous tribe, and not UFOs. When he’s finished, there’s dead silence, before Brendan asks how much a military drop costs. Brendan doesn’t buy any of it, or any the fertilizer-grade explanations Coach gives, and doesn’t think he can trust anything he says anymore. Anyone who thinks Coach is full of it is my favorite Survivor.

Day 22 starts with another Coach intro. I’m only glad there’s no lightning effects this time. When he’s done, he tells them it’s some kind of oral tradition thing that you can’t google. It’s a good thing because half the tribe pulled out iPhones and netbooks to look it up. Just kidding, Sierra said he looked hilarious, which incurred the wrath of the dragon slayer.

Speaking of that, let’s catch up on our Coach metaphors for this "battle" – using the following Coach logic: to defeat an army, you have to cut off the head of the dragon.

Now she has to go, too. I hate when you decapitate a dragon and it keeps excreting bowel movements; happens every time. Some say that's how the Rocky Mountains were formed; America's Favorite Mountain Range.

Erinn and J.T. have a little heart to heart while fishing. She’s doing a little flirting, but she’s really just looking for a new alliance.

Challenge time! Split into three teams, the Survivors toss a metal ball to break the tiles of the opposing team. Last team with tiles remaining gets a river rafting trip and a feast. Coach is exciting to be hitting the river again; maybe he’ll see his indigenous friends. Black loses two tiles in the first round, Brendan explains none of them have ever done this before, oh, but he forgot… Coach has. With two tiles left for black and white, and only one left for red, Coach nails a long shot on black; one left for them. Next round; Erinn knocks out the last red tile. Brendan takes out a white tile, and then cracks the corner on the last white tile, but it doesn’t fall. Then Erinn cracks the black tile and it doesn’t fall either! Finally, Brendan is able to hit the white tile again, winning the reward. They choose Stephen for Exile and Coach tells him to, "be the wizard." He’s the first exile to actually be alone out there and it took him the rest of the evening to make a fire, which he likened to child birth. I don’t know if that makes him sound more sexist, or arsonist.

J.T., Debbie, and Brendan enjoy some river rafting before they arrive at a picnic laid out on a beach, then we watch the starving people have food orgasms. Brendan and J.T. talk a little strategy, but only vaguely.

When Brendan gets back to camp, he tells Sierra about how he fell in love with J.T. on their trip, so he wants to get rid of Coach and Tyson. He’s really excited about this, and he’s trying to go into salesman mode on Taj, but the way his hair looks doesn’t make him look very convincing to me. His main pitch seems to be that he fell in love with J.T.; Everyone loves J.T.

Immunity Challenge time! Survivors are attached to ropes that are tangled in obstacles. Right away, I’m thinking a girl wins this challenge… or Tyson. This challenge is made for skinny, limber people. First three through their obstacle go to the second around, a three-tiered rope obstacle. Sierra, Tyson, and J.T.  get through the first part of their obstacles. Surprisingly, it looks like Coach hasn’t done this before. On the third part of the obstacle, Brendan joins the leader. Tyson and J.T. get through first, leaving Sierra and Brendan, but Brendan surges ahead. They showed a lot of Coach’s loserface during all of this.

Tyson jumps out ahead with J.T. not far behind, but then Brendan took the lead and J.T. fell behind. As Brendan gets stuck, Tyson is able to pull out the win. Coach is all smiles and dragon slayer.

Back at camp, Tyson quickly lays out the plan to split the votes between Sierra and Brendan so one of them is guaranteed to go. He hates Brendan, but he HATES Sierra. Brendan lays out his plan to vote for Coach. J.T. and Stephen go to discuss flipping on Coach, they don’t really believe his Amazon story. A phony plan to vote out J.T. is passed around by Brendan to try to throw the scent off for Coach and Tyson. Coach says, "dragon slayer" and, "the chosen one," one more time before tribal council, in case you’re counting or drinking.

Jeff asks who the class clown of the tribe is, Erinn says it’s Tyson. Jeff asks J.T. who tells the best campfire stories, and naturally, the Amazon story comes up. Jeff asks if this really happened, and Coach says he toned it down. Those natives were actually cannibals who he says discussed eating his ass. I didn’t know that cannibals were in to salads. His body is covered in scars; he’s almost been killed 5, 6, 7, or 8 times. He doesn’t always drink beer, but when he does, he drinks Dos Equis. Taj identifies J.T. as a triple threat, and Jeff asks Coach what he thinks. Coach is stuck in his own mythos and says some more phony warrior lines. Suddenly, Jeff is asking the tribe one by one if they have the hidden immunity idol. Brendan raises his hand to announce that he has it.

Another ancient samurai, cut of the head of the dragon, dragon slayer speech from Coach as he drops his vote in. Stephen calls his vote the, "Wizard’s Lightning" and shoots it back. Brendan chooses not to play his hidden idol. The first two votes go to Coach, but the next three go to Brendan. Someone votes Sierra and the split is on. At three votes between he and Sierra, Brendan gets the last vote and becomes the first member of the Jury. The head is cut off the dragon, Coach is all smiles, and Brendan leaves the game with the hidden immunity idol in his pocket. I cannot believe that Coach is still in this game. 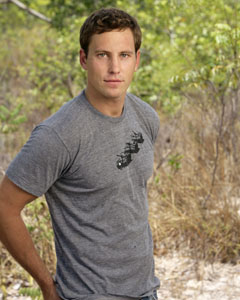 Next time; Sierra gets abused by the people who hate her.