This episode seemed a little different to me than the rest of this season of Amazing Race.  They really seemed to be playing up to the drama between contestants, but we'll get to that soon enough.

So all the Amazing Racers set off to China, except Team Midget Stuntmen, they have to wait like 4 hours because they cheated and sold their personal property to pay for cabs in the last episode. 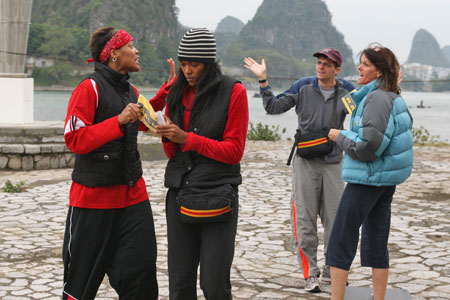 The first marker was outside a hair salon.  For some reason the teams couldn't see the yellow and red flag even though it was right in front of them.  Suddenly the Deaf Kid sees the box and  leaps forward to grab the clue and with Female Basketball player right on his back.

Almost simultaneously, Luke and Jen saw the box and lunged toward it. Luke reached the box first, but when Jen came up alongside him and tried to sneak in, Luke reacted by throwing his elbow, almost hitting Jen in the face. After getting her clue, Jen called Luke a bitch because in her words, "it was a bitch move."

Just from the stand point of a fan, I'm not sure what the big deal is.  How much time would you save if you got the clue first?  I'm thinking 5 seconds at the very most.  Why fight over it?

I also can understand Deaf Kid being like "get off me, woman!  I'm trying to get this here envelope."  Basketball player knows that if she comes inside the paint that she's gonna catch an elbow.

So Deaf Kid's mom makes a big mistake and tells Deaf Kid that Basketball player called him a "b*tch".  Why get your son all worked up?

"Calling a deaf guy a bitch is not nice." Margie added, "I didn’t expect that from her. It’s just wrong." Meanwhile, Kisha didn’t appreciate Luke’s flying elbow, saying, "It was bad sportsmanship on their part. That wasn’t cool at all."

Why is his mom making this an issue about being deaf?  It's not nice to call anyone a "b*tch".  It seems that their fight had absolutely nothing to do with Luke being deaf, but that's not going to stop them fighting about it at the end of the episode.

At the next clue box, Luke and Kisha get into it again.  This time Kisha gets to the box first and practically gets run over by Luke.  Hey it was a moving screen, so no foul.  The two teams freak out again.

Meanwhile the rest of the teams are fishing aboard tiny rafts using sea birds.  The birds have a rope tied around their neck, so they can catch fish but can't swallow them.  So they return to the raft and the fisherman takes the fish from their beak. 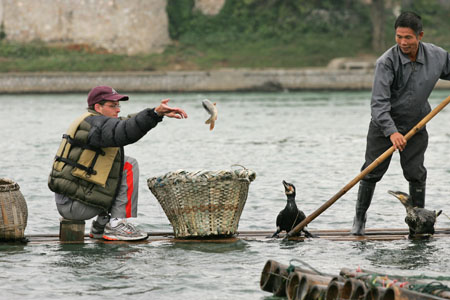 Asian Lawyer Brother/Sister team speak Chinese so they are in a good position yet they complete their task really slowly.

Luke gets bit by a seabird.  He complains about it a lot, calling it a dumb bird.  Who's dumb?  The bird trying to get a fish or the guy holding a fish in front of a bird trained to catch fish?

Back at the salon, Team Midget stuntmen have to do an extra task, the speed bump, in order make up for coming in last place in the previous episode.  All they have to do is wash two old women's hair out in the street.  Cake walk.  Easiest speed bump of all time.

Next the Teams have a choice between writing calligraphy or dancing.  Everybody chooses calligraphy except for the cheerleaders who constantly talk about how good they are at learning dance routines.  Seconds later the Amazing Race editors show them bumping into people and messing up.  The reason why I said this episode seemed different was because the editors seemed to be purposely trying to make fun of contestants in this episode. 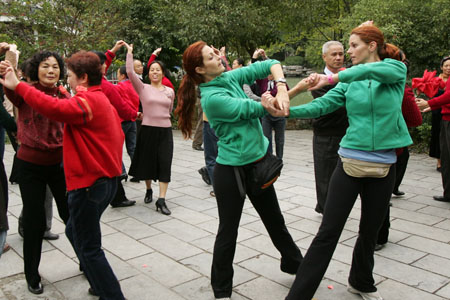 Speaking of the hot cheerleader chick... what's she always spilling on her shirt all over her bosom?  She's a messy eater.  Her tank top is always filthy, it's distracting when looking at her boobies.

Three teams rush to the finish line.  A Chinese couple sits with Phil eating food.  Phil tries to get them excited about the race "here they come now!".  Chinese couple doesn't seem to care and doesn't even stop eating.  Kinda cracked me up.

At the finish Phil just has to bring up the drama again.  Deaf Kid and his mom lose it, blaming the basketball sisters for hating Deaf people.  Enough already.

"Stay chuned for scenes from next weeks episode"