Sorry this is so late.  I've been out of commission for a little bit.

There are only four teams left and they all rush to the airport to catch a flight to China.  Sneaky Team Asian Lawyers speak Mandarin so they ask for seats near the front and ask that the other sit in the back.  Never trust a lawyer and only sometimes trust an Asian.

Deaf Kid Luke and Basketball player Kisha still aren't playing nice but they've taken to the silent treatment to teach each other a lesson.  It's very effective.

Luke commented, “I want them out. I want them eliminated next. I don’t want to go to the final three with them.”

The teams land in Beijing and and Luke bumps into Kisha at the cabs.  It was a minor incident, but Luke let her know that he'd let his bumping do his speaking for him... or listening for him...you get the point.

The first Roadblock is a foot massage.  Sounds pretty nice after a long race doesn't it?  Well this isn't your typical kinky Asian foot massage with a happy ending.  The masseuses torture your feet for 10 minutes using their knuckles and applying extreme pressure in order to cause pain and discomfort.

Cheerleader starts getting the massage and nervously laughs but it soon turns to tears.  Other Basketball player has to bite her jacket to withstand the pain.  Look at this picture, these two  can barely last the 10 minutes.  If they say "uncle" they can stop, but they'd have to start from the beginning again to complete the Roadblock.  Hotter/Angrier Cheerleader threatens, "Don't you say 'uncle' or I'll kill you!"  Jeez chick is seriously psycho and it's got me all bothered. 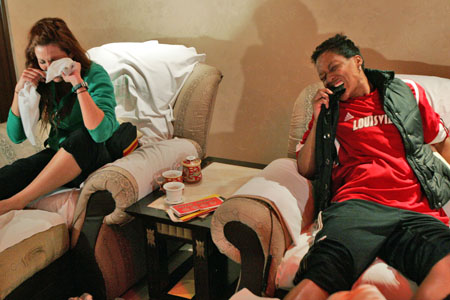 Hot Asian Lawyer chick also got the foot massage.  Notice any difference in her picture?  She took it like a champ.  When she started feeling discomfort she starting moaning sensually, it was a far cry from what the others were doing. 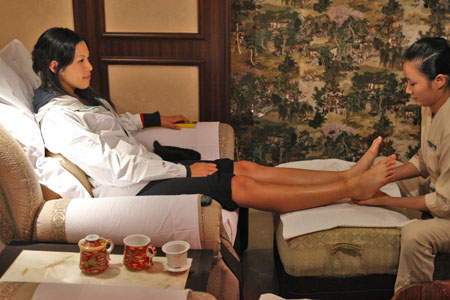 Deaf Kid took the massage and he moaned too but it caused no arousal from any viewers.

After the teams completed the Roadblock they raced in taxis to the Olympic Swimming complex.  They were given the choice of swimming a 400m relay.  Each team swims 100m twice.  For no particular reason they raced against Michael Phelps time in the 400m individual.  Obviously no one could touch his mark.

The other choice was to synchronize dive.  All the teams had to do was hit the water at the same time off of 3m spring boards.

Turns out that nobody on the Amazing Race is comfortable in the water.  The Deaf Kid and his mom had a beginner's stroke but they tired quickly and turned to the back float.

I was excited that the Hot Cheerleader would finally have to slip into a bathing suit, something that she had somehow avoided the entire race.  Unfortunately they don't show her at all, only in the very modest Speedo LZR suit.  One of these days Amazing Race... one of these days!

Cheerleaders and Deaf Kid finished the 400m relay without too much trouble. 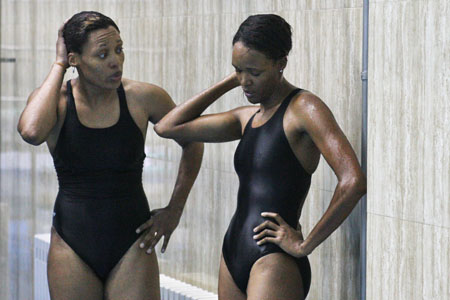 Team Basketball players first tried the 400m relay but after the first 100m, Kisha was too scared to swim so she convinced her sister to switch to the spring boards.

Team Asian Lawyer took to the springboards right away but had absolutely no idea what they were doing wrong.  This seemed like the easiest challenge but they were hitting the water literally seconds apart and they were trying forever.  Why not say "one... two... three... jump!"

Kisha's fear of water and inability to swim didn't make the spring boards any easier.  She couldn't wear her life vest and looked like she was going to drown.  I'm not sure if there were any Chinese life guards near by to save her either. 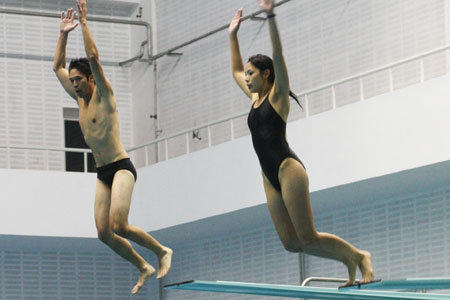 Both teams realized that they'd never be able to synchronize dive so after what seemed like hours they finally completed the 400m relay.

Basketball Sisters were in last place by a hours.  Cheerleaders were in the lead, hoping... actually crying thinking that they had finally won a leg of the race.  Phil had a surprise for them though.  He handed them an envelope.  This leg of the race isn't over!  Oh dang!  What's the Amazing Race doing to us?!

"Stay chuned for scenes from the next episode"