Last week on UNCOMMON SURVIVOR, it was the first 15 days recap. Flash forward to the present. Suddenly, alligators. Hundreds of them. Brendan and Sierra have Timbira's hidden immunity idol, and Taj and Stephen have Jalapao's idol, complete with secret cross-tribal alliance. Jalapao lost the immunity challenge due to the unfabulous performance of Spencer the secret gay. Taj had a tiny meltdown, but it didn't make her unpopular enough to vote off. Spencer's flame was extinguished instead.

Well, what are you waiting for? You can't comment from out there so you may as well come inside and get comfortable.

At Jalapao, the morning after, Sydney is afraid if they lose again, she'll be next to go, thinking it would be between her and Taj. Joe watches strike three bisect the heart of the plate by not seizing the opportunity suggest a girl on girl competition. He also says he has a "thing" for her, so she's safe. I really hope he doesn't show it to us.

Day 16 at Timbira looks like rain. Debbie said the breakfast beans were done, but Coach likes them cooked "softer." I don't know about you guys, but if there's a noticeable hardness to my bean, I send it back. However, I do NOT douse said ben with river water, which is what Coach did. As the rain comes down, the team watches Coach's plan to fully cook the beans in river water fizzle from the security of the shelter. He eventually gives up and sneaks under the shelter, too, leaving the beans to burn a full two inches onto the inside of the pot. As they scrape out the charred remains, after the weather has passed, Sierra calls out Coach for screwing up. As expected, he nails himself to the cross and douches it up with an "apology" that was actually him saying he didn't care and demanding forgiveness. He tells them it's water under the bridge, but I don't think he understands that it's the offended party that is supposed to say that, not the offender. Brendan accepts his mistake because he's a predictable player. Honestly, I wouldn't be able to keep my focus. I'd be right there with Sierra cracking on Chef Boyardurr. As all this is happening, I can't help but notice, everyone besides Sierra is looking emaciated. She was already skinny but these people are looking gypsy curse thin.

Over at Jalapao, Stephen and Taj share a hammock and Taj brings up including J.T. into the alliance. Taj is also looking thinner, too thin perhaps, and I'm beginning to think hot Survivor glow might never materialize. Stephen wants to remain the middle man to this equation, but he's unsure. I think this ship is pretty shaky already, and with bringing another person on board, five heads to a two idol scenario, mutiny is surely on the horizon.

Reward challenge time! Tribes build a barricade inside a frame, then try to toss ceramic pigs through the barricade for ten minutes. This should be a Wii game. Most piggies at the end wins a trip to a waterfall barbecue. As usual, double Exile is in play, so one of the winners doesn't actually win. Each tribe assembles their obstacles and begin shattering piggies. Timbira finds a hole in the Jalapao defense and racks up five pigs as Jalapao barely gets two. Jalapao begins to make up ground, tying the score at nine, then taking the lead. Tyson starts to panic and shatters more little piggies. With one minute left, each team has twelve piggies. Timbira wins it out in the end, they choose Joe for Exile, and he chooses Erinn.

Timbira chows down on hamburgers, chips, drinks, scarfing as much food as they can. Then they go swimming. I bet the camera man didn't even warn them about waiting a half hour. Coach pretends to feel bad for Erinn, but he really thinks she's still lucky to be in the game.

Joe and Erinn choose urns and she realizes there's no idols for them out there. They get to know each other over building a fire. Erinn shares her clue with Joe and they discuss their future. That Joe is such a charmer.

Back at Jalapao, Taj and Stephen know Joe is going to know where the idol is supposed to be, so Taj crafts a fake idol. This has become standard practice, almost as soon as the hidden immunity idol twist was first revealed. She hides her fake idol necklace thing where she found her own and returns to camp to hide her own real idol. Later, J.T. decides it's time to fish, and grabs a bag to take with him, the same bag where Taj hid her idol. JACKPOT! Seriously, what are the odds, or what the hell are you doing, Taj? J.T. goes to tell Stephen, and Stephen lets J.T. in on the secret. Spencer's gay. No, wait, Taj found the idol already. Stephen gets them together to talk, and J.T. tells her how he found the idol. Taj tells him any time he needs it, he can use it. He's totally on board.

Immunity challenge time! Slingshot tile breaking releases sand that releases puzzle pieces. Assemble the puzzle first for immunity. Those Brazilians and their slingshot puzzles. Qué loco! Tyson cracks the first tile dead on, J.T. cracks his first, but not quite in the center. They each get two, but J.T.'s third tile hasn't been revealed because the sand behind his tiles is not releasing fast enough. Timbira gets a head start on puzzle assembly as J.T. finally connects with the final tile. Timbira maintains the lead and wins immunity.

Back at Jalapao, Joe's leg is infected from a wound he suffered. It looks gross. Joe tells Taj and Stephen he didn't get the clue at Exile, but then he says he needs some water and sprints off in the direction of Tree Mail. He finds the fake idol and has no idea it's fake. When he gets back to camp, Taj is away and Joe tells everyone to vote for her. Sydney is completely in favor, but J.T. and Stephen relay to Taj what has transpired. The plan would be to let her play the idol, but J.T. doesn't want to get rid of it just yet. He and Stephen try to convince Joe that Taj is more powerful after the merge, because of her Exile bond with Brendan. Joe wants to keep Sydney, though, he wants to show her his thing. They don't come to an agreement, and Joe tells us he might hand over the fake idol to Sydney. Stephen and J.T. still aren't sure what to do, but Stephen is in possession of the idol and think about back-stabbing Taj. Ladies and gentlemen, please keep your hands and arms inside the LOLercoaster.

At Tribal Council, Jeff probes (you see what I did there?) the tribe members to get someone to talk. He identifies Taj as a threat with her potential cross-tribal relations. Sydney says she's the opposite of Taj, loyal to her tribe alone. They vote, Jeff tallies, then reads them off, but nobody plays any idols! The votes are read off: two for Sydney, two for Taj, but the final vote is for Sydney. Joe puts on a pouty face as she takes the walk. 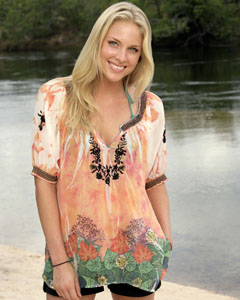 Sydney doesn't seem bitter about getting voted out, but I think Joe should have fallen on the sword if he liked her so much. What's losing a million dollars to let us watch the cute face for another few weeks?