Previously on, UNCOMMON SURVIVOR: jbox took the reins, Tyson got eliminated in an excellent blindside when he didn't win the immunity challenge. The Warrior Alliance was shattered. Sierra went from abuse victim to Coach's favorite little player that couldn't.  jbox must be good luck, or he's the new dragon slayer.

Tie your top-knots and don your 15th century samurai armor, it's time for battle. Seven remain, who will be slain tonight?

Immediately after the vote, J.T. and Stephen try to do some damage control because they left Coach and Debbie out of the plan. She is upset about it, but Coach takes it pretty well and tells them no hard feelings.

Day 28 begins with a scrambling Debbie, who likens herself to a snake and asks J.T. and Stephen who they're voting out next; Sierra, Erinn. Later, she runs off to Coach to try and scheme to reblindside the blindsiders and redraw the old tribal lines with Sierra and Erinn to take out J.T., Stephen, and Taj.

Reward challenge time! Survey challenge: Guess what the group thinks. If you guess right, chop one of three ropes for another survivor.

Stephen answers correctly and wins the reward, sending Erinn to Exile to preserve some alliance or something. Then he chooses Taj and J.T. to go along with him to the reward. Because of who he chose, Coach is afraid and he is at their mercy. The reward winners go to a native village to eat all the local's food. A little native girl bumps her head and Taj picks her up and shifts it into mommy mode and she has a "moment." The trio has a strategy meeting in very cool natural spring.

Over at Exile, Erinn failed to build a fire before it started to rain and was left to rough it without anything.

Back at camp Forza, Coach asks Sierra where her loyalty lies, and she won't tell him because he and Debbie were voting for her. They also don't like her as a person and generally wish she were dead. They didn't say that to her, but we all know it. Debbie says that she and Coach know where they are, and Sierra tells her they're in big trouble because it's just them two. Debbie tries to act like she's got all kinds of friends and they hang out all the time and she's popular and Sierra just doesn't know, but Sierra tells her how it really is and Debbie flips out and then storms off. She and Coach are scared and looking for a plan. Coach really just wants to get in on the J.T. alliance.

Day 30 begins with Coach and J.T. at the fishing hole, they both want Sierra gone, and Coach even lies to J.T., saying that Sierra approached him about getting the old alliance back together. Sierra goes off with Stephen and tells him what really happened, the truth. Then he hears Coach's story, that Debbie and Sierra both approached him about aligning. Ladies and gentlemen, that was a double-under-bus-throwing you just witnessed. Unfortunately, Stephen doesn't know who is telling the truth and he compares stories with J.T. They eventually agree that since they're going to have to betray Coach, they may as well do it now.

Immunity challenge time. Erinn returns and Stephen brought her a sweater, how sweet. Toss a grappling hook to catch three bags to advance. In the next round, navigate a ball through a maze. Coach and J.T. advance quickly. Debbie mocks Jeff and Erinn snaps at him because she hasn't eaten in three days. Taj's breast flies out. Stephen's rope gets knotted, everyone else struggles some more, Taj's breasts keep flying out. Eventually Debbie advances. In the next round, J.T. plays it a little too fast and loose, and Coach's slow and steady approach wins him immunity. Damn it all. He shouts, "dragon slayer" when he wins, too.

Back at camp, Coach is all smiles,

He professes on about how his meditation and prayer helped him win and rattle off his entire list of sports metaphors. He is now very secure about where he stands in the game, like he didn't need to win. Sierra tells Taj and J.T. about Coach and Debbie trying to get her on their side, and it forces a confrontation. Coach tells his lies again, Debbie cries and tries to act innocent. She's a 46 year old professional woman, damnit, and she's not going to be caught lying on national TV by a 23 year old about what she said, I mean, what she didn't say. Through it all, Stephen senses that Sierra is telling the truth and he and J.T. discuss voting off Debbie, but Sierra is also dropping drama bombs like it's the second World War around camp, so they don't know what to do.

Time to vote! Brendan and Tyson enter for the jury. Haha, Tyson sucks. Jeff chats with them about there only being 7 left and they aren't all happy. Coach spouts sactimonious for a second before Sierra's eye roll gets Jeff's attention. Finally she gets to tell the truth uninterrupted. Coach gets very nervous and then tries to act like she is crazy and he is perfect.


"She can try to make accusations of two things that I hold most precious: honesty, integrity, and courage" -Coach

Then he goes on a no holds-barred anti-Sierra rant. She's the reason babies cry and kittens die. She's the reason sin entered the world. If he weren't wearing that immunity idol, he would have totally earned a ticket home. The votes are read off: Sierra and Debbie each get two votes, Stephen gets one. Sierra gets a third vote, and then a fourth. Sierra is eliminated. Damn these people. If jbox had written this, I bet you they would have voted Debbie out. Oh well, at least there's this picture. 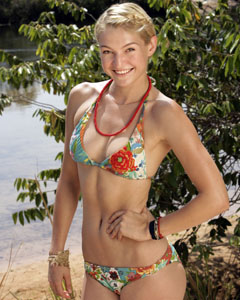 Next time, it's family reunion time. Prepare your boxes of Kleenex... for your tears. Oh, and Debbie turns on Coach!  Erinn ended up casting the vote for Stephen because she is not a smart person.