Previously on UNCOMMON SURVIVOR: Coach was coach. Debbie was Debbie. Apparently Debbie was worse, we still don't know how they did the math on that. Will this finally be Coach's swan song? Will Taj cry? The long odds are on Stephen mentioning tofu. Just throwing that out there.

I must admit my love/hate feelings about Coach. He's so absurd, I can't help but wait for the next thing he's going to come up with. Normally, I would just tune that crap out, but I am compelled here. Where did they find this guy? It also makes me wonder why so many people quit watching Survivor. I guess you can't have a Coach every season. If he gets eliminated, it's great, but him sticking around has also been worth it.

Immediately after the vote, the remaining survivors cleverly spin their tale of elimination to Coach like they saved him and it was all Debbie. Coach is so grateful and is finally up to speed on his standing in the tribe. I've never seen somebody so happy to be put in their place.

Day 34 at Forza, I dislike this name because it was Coach's idea. Coach is throwing himself at the mercy of J.T. and Stephen. The poor dragon slayer. His back hurts. He smoked twenty cigars. Waahhh. He's deathly afraid of Exile. Are you kidding me? After all his stories, after Erinn takes it like a champ without a damn fire, he's going to whine about this? I hope he gets it!

Reward challenge time! They spelled out SURVIVOR in a maze and show another of Jeff's favorite helicopter shots. I pretended it said UNCOMMON and my ego grew three sizes. The challenge is having your feet shackled together while navigating the maze and then assembling a pole to knock down some things and raise a flag. Is that some kind of knock on Brazilians? J.T. gets out to an early lead, Coach just follows him. Erinn follows them and everyone else falls in behind. Jeff says they have to start working on that pole and I had a flashback about rugby players. Then everybody is working on their pole. J.T. wins handily and sends Coach to Exile. Coach says he's going to take the monastic approach and not eat, and in a moment of pure, rock-solid win, Erinn calls him out, saying he's taking the "martyr approach." Coach, when under attack, converts his bullshit manufacturing facilities into excuse factories and begins cranking them out to cover for his inadequacy despite all of his delusions of grandeur, finishing it with assuring them that he's not making excuses. J.T. enjoys the lulz, as do I. Erinn nails Coach, but she also opens herself up by being disruptive. He brings Stephen with him to the reward. 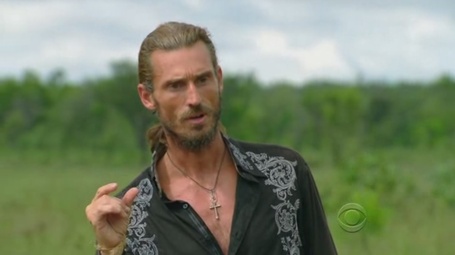 The girls head back to camp. Erinn is remorseful for calling out Coach right then and there, but Taj is also a member of the anti-Coach club. Erinn's hot Survivor glow is in full effect now, by the way. The glasses, the little shorts, the messy hair; yes. 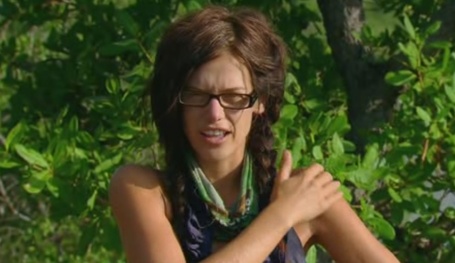 Coach's entire time at Exile involves proclaiming himself as the mayor of Martyrtown. Honestly, he gets so much one on one camera time here, he should have volunteered for this weeks ago.

J.T. and Stephen are flown to the governor's retreat. When they are shown to bathroom, they both are amazed at their appearances in the mirror. J.T. takes a shower, and since Stephen won't leave his side, he's forced to squeeze one off while Stephen watches. Give a guy some breathing room, okay, Steve? It's been a long month. The boys enjoy a Brazilian barbecue. Stephen called it a meat festival, and I doubt it was his first. They discuss eliminating Erinn because she can't keep her mouth shut, but I think they're looking at it backwards. Drag along the most unpopular, yet least annoying one.

Back to Exile, Coach finishes his time there with a story about how awesome he is. It never changes with him.

Immunity Challeng time! Coach limps in from Exile with a walking stick. Taj is eyerolling. He explains that he had nothing, but it was the best time of his life. Before the challenge begins he begs for some water from J.T. The challenge is one of endurance; barefoot standing for long periods of time. Everyone lasts until the third set of foot holds, but only Coach and J.T. last after that. Coach realizes that this is his only reason shot for safety. J.T. begs for a steak and Jeff stokes the drama flames. After 50 minutes, both of them are still standing. A few minutes pass, and Taj reminds Coach of his hurt back. Suddenly he's not doing so well, letting out some manly, dragon-slayery screams. The troll works perfectly, Coach drops out collapses to the ground. His back was spasming, but he doesn't want medical to look at his back. No, not that serious? Ok, shut up then. 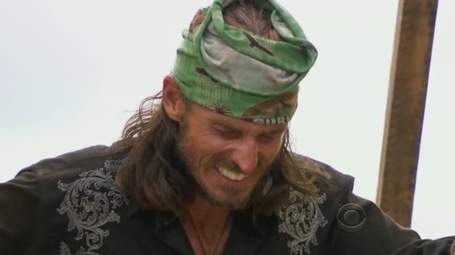 The tribe walks back to camp and rain begins to fall. Erinn and Taj chat about Coach's acting performance. J.T. takes Coach down to the fishing hole to talk about them voting for Erinn. Stephen is still on the fence about it, though. Apparently, the warrior alliance is still intact, and it was all along, and according to Coach, hasn't backfired on him? He has a very short memory.

At the vote, the first question Jeff asks is about the reward challenge confrontation. Coach makes a fun chauvinsit remark. Jeff seems to know it's between Coach and Erinn. Coach also wrote a poem, I hope you're wearing suspenders.

With friend and for we march to the battle plain
some to seek success, others to seek fame
We play with honor, for the love of this game
And with armor or without, we will toil in vain
So that someday, someone, somewhere, will remember our name.

The first vote goes to Coach, the second one to Erinn and-- OH MY GOD WHAT IS THAT!? 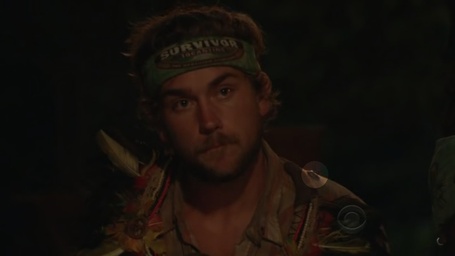 The next vote is for Erinn, but that thing was crawling on J.T.'s shoulder. Someone help him! The next vote is for Coach, all tied. The final vote reads Coach's name. Jury member Sierra celebrates. At last! The dragon slayer has been slain. J.T. is not happy at all, by the looks of it. In Coach's final confession, Stephen is outed as the evil wizard, like Christopher Lee and his army of orcs. 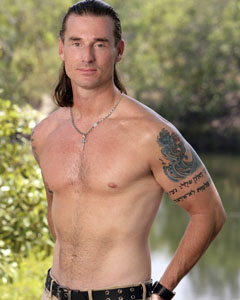 I wonder how long he had that tattoo before the show started.

Next episode is the finale this Sunday, Uncommonsportspersons! Set your various devices and clear your schedules, it's the two hour finale and live reunion episode. Even Cousin Oliver will be there!