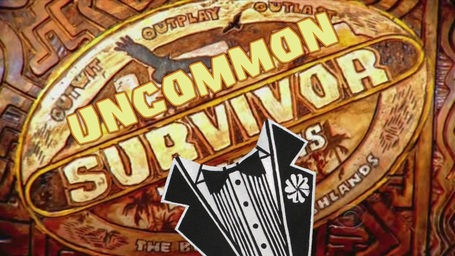 Welcome to UNCOMMON SURVIVOR 18 FINALE! Did I get too dressed up? After a long introduction that catches up on everything you can find here, they introduce the final four. Erinn, the back-stabbing mean girl, yeah... right. She's only here because she was the second-most unliked young girl. Stephen, who'll take his veggie wrap without alfalfa sprouts, thank you very much. He got this far by latching onto the best players he could find. Taj, the mother, who is married to Eddie George. She's here because face it, everyone wants their mommy after 3 days stranded out in the wilderness. J.T., the golden boy, the ultimate warrior. I heard he can lift his cattle two at a time, one in each arm. He is the heavy favorite to win. He walks on water and he makes lambs lie down beside lions, and he's never had a vote cast against him.

I'm sad it's almost over, crew of the S.S. Readership. You're going to be out there, Uncommon Sporting it up over the summer, you won't have time to read a blog about it. We'll still see each other, right? You'll come back and visit often? I'll write you.

The remaining Survivors have just eliminated Coach, except for J.T., who had voted for Erinn. This was the perfect time to eliminate Coach, by the way. We got to see just how much of a lunatic he is for as long as possible without him being in danger of actually winning this thing. J.T. and Stephen discuss their votes openly, and Stephen is becoming concerned with who he can beat in this game. I don't think he can beat J.T. or Taj, and he's still not a sure thing over Erinn.

Day 37 begins! J.T. and Erinn go off to check tree mail. Taj and Stephen vaguely hint around getting rid of J.T., but they really don't want to. Tree mail is a spider.

Right down to business. Immunity Challenge time! Tarantula obstacle course with a puzzle; awesome. Everyone heads off. Taj follows J.T. As they're struggling to get their first bags back, Jeff guarantees that the Survivors will lose skin in this challenge. J.T. gets his third and final bag and starts working on his puzzle. Followed by Stephen, and a distant Taj and Erinn. Puzzle assembly is well under way, and Erinn makes a strong comeback. J.T. gets stuck with one piece left. Erinn gets really close to beating him, but J.T. fixes his mistake and wins immunity. He's unstoppable. Erinn knows she's next, it's her versus "The Jalapao Three."

Back to camp, Taj is confident that the boys will stick with her. It's the Jalapao Three, they have to, right? Erinn gets the boys down by the river and begins to try and worm herself a way in. Her approach, the jury votes, strikes a chord with J.T. Erinn leaves them to discuss. They make a bro pact, no matter what, they're sticking together. But they're still tight with Taj, and they're all voting for Erinn.

Tribal council! Jeff brings up the reversal that Jalapao played on the Timbura members, and that it doesn't look good for Erinn. Coach is shown stroking his warrior moustache. Stephen tries some diplomatic manuevering, but Jeff doesn't want to hear it. A dramatic thunderstorm begins. Jeff probably creamed, that's his favorite. Voting begins, Erinn votes for Taj, Taj for Erinn. Jeff reads off the votes. The third vote is for Taj, and then the fourth. Taj is voted out! I'm honestly shocked. Yet another blindside, down to the wire. 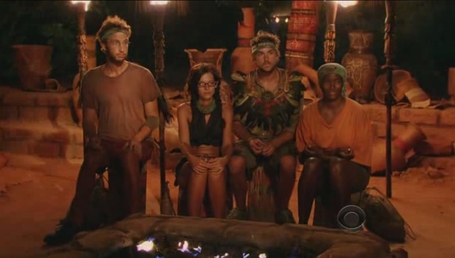 Taj is surprised, as she should be! They pretend a week has passed and show us that Erinn will be trying to pit J.T. and Stephen against each other. It's really her only play. That night back at camp, Erinn is still amazed she's here and keeps talking about it. J.T. and Stephen are still upset that they had to get rid of Taj, and Erinn just keeps talking. The next morning, as soon as they are left alone, Erinn begins to split them. They both know they can't go up against J.T. Poor J.T., he's totally committed to Stephen, he keeps telling Stephen, too, and all he can do is say "yup."

All three of them go collect tree mail and it's my least favorite part of every season, memory lane. It's like the title credits, only longer. Stephen gets poetic for about two whole minutes, he really is the evil wizard. Carolina was the first out. She was busty, and she was annoying. She is shown kissing another girl in slow motion. Candace! She was hot and she hated Coach. We were in love. Jerry! He got sick and that was about it. Sandy, the crazy bus driver. She tried to drown Erinn. Spencer, the secret gay. He was the youngest Survivor ever. Sydney, the hot one. She gave massages. Joe! He got an infectred knee and got eliminated by medic evacuation. Brendan, the first dragon. Tyson, the over-confident loser. Sierra, the one everyone hated. Debbie, she turned on everyone as soon as Coach lost control. Coach, the  lunatic. There's nothing I can say, he's freakin' Coach. Taj, still, just wow. Can't believe they got rid of her, even though it made sense. The final three burn their idol things and group hug while thinking about winning the final challenge.

Jeff calls everyone in for the final challenge. One-handed ball maze madness! Drop a ball in the chute, catch the ball from the chute. Add balls until it gets bananas. Drop a ball and you're out. Nothing happens until they all add their third ball, Erinn almost drops one. While Jeff magnifies the drama, Erinn misses a ball out of the chute. She's out and can only look on. Stephen makes two nice saves before a fourth ball is added. J.T. hasn't had to flinch once. With four balls in the chutes, they're both going strong but Stephen keeps coming close to dropping the ball. Jeff keeps on talking. Stephen eventually drops one and J.T. wins final immunity. 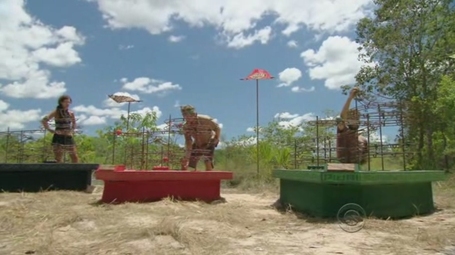 Back at camp, Stephen is glad that he didn't win, mainly because he's pretty sure J.T. is taking him to the final two. He's glad he didn't have to make the decision. J.T. and Erinn talk over an afternoon fire. Erinn spills that Stephen told her that he'd take her and J.T. doesn't like it one bit. Later, the two boys are left alone. Stephen flat out denies Erinn's story. Stephen assures J.T. that he's going to win, and J.T. tells him that he'd be scared if he were him. Is that an admission of intent to get rid of him? The last thing J.T.'s mama told him was not to do anything stupid.

The final tribal council is here! Jeff asks what Erinn and Stephen's pitches were. Easy money versus loyalty. J.T. seems bent on making the correct morale choice. Stephen begins to nervously yammer on about the breakfast the he was promised on day 39. J.T. is the only voter here. He gets up to vote and draws a penis. Just kidding. He voted for Erinn. Stephen is spared and Coach does a fist pump, for the loyalty. Erinn is a little surprised, but deep down, she knew. 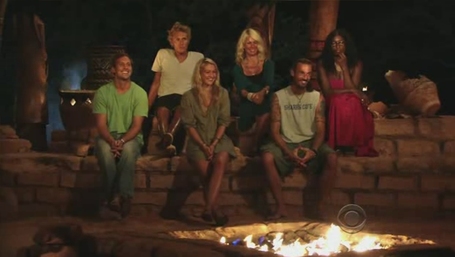 The boys greet day 39, just how they planned. Stephen declares them friends for life. Tree mail is all the ingredients for a huge breakfast, including champagne, which I wouldn't have too much of around Stephen, if I were J.T. Stephen says the breakfast is a symbol of their love and they toast and share first impressions. Truth or dare! How romantic! After breakfast, the pair leaves for the final vote. I guess CBS felt they had to balance it out, because then they showed this pair of hooters. 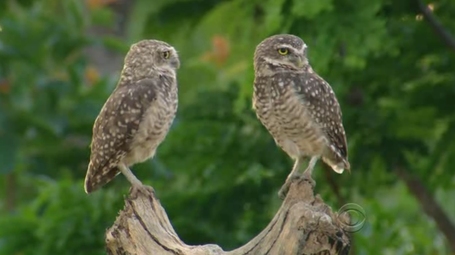 They arrive at nightfall and the jury is lead in. Stephen makes his speech. Everyone smiles at him while thinking, "cool story, bro." J.T. makes his speech and everyone pretends not to swoon. The jury gets their chance to address the pair. Brendan asks Stephen first what his growth means to this game, then J.T. They answer back and forth, and it looks like there's a little blood drawn. Erinn asks Stephen if she should just vote for J.T., since he's back-stabbed every alliance he's made. She asks J.T. why she thinks Stephen was the best to bring along. Debbie tells us she hasn't decided yet. Neither has anyone else, lady, this isn't about you. She took being lied to in the game personally. She talks to them like she's their principal. She asks Stephen who he would have taken had he won. He admits he probably would have taken Erinn. J.T. is disappointed. Coach's turn! The warrior and the wizard remain! He asks for examples of being honest and being noble warriors. J.T. has no trouble with answering, but Stephen is kinda sweating it. Sierra tells Stephen she has no question, and that he's the weakest survivor in asking J.T. why he brought Stephen if he believes in bringing the strongest to the end. Tyson asks J.T. why Stephen was an asset to him, and his answer hurts Stephens feelings. Man, they are gonna have a breakup right here and now. Taj's turn. She's crushed that she was blindsided even at the end. She didn't want to be lied to about it. J.T. says how bad he felt about it and he had stuck his neck out for her, but Stephen throws J.T. under the bus, saying it was his idea to vote her out for days. J.T. is amazed, apparently the truth hits home and J.T. scrambles. Stephen decides to air it all out. They begin to bicker back and forth, Taj tries to stop them, but just takes her seat. They're totally not going steady anymore! J.T. tells Stephen that he should have brought Erinn. Ouch, man, ouch. Bromance over? 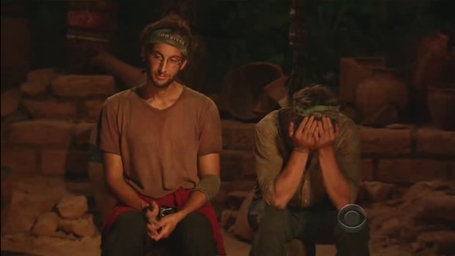 Jeff tells the jury to vote for a winner. Taj says that someone should try being a man. Coach writes, "THE W" before it cuts away and throws his coat over his shoulder, like a democratic samurai. Jeff takes the votes and walks out. He arrives, live in New York to a studio audience. After a speech, the votes are read off. First vote goes for J.T. Second vote, "the warrior", J.T. Third vote, J.T. Looking like a landslide, here. The next vote confirms it: J.T. wins Survivor Tocantins. It was a unanimous vote. 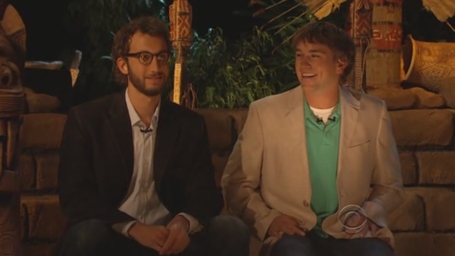 Discuss the rest of the reunion episode in the comments.