Laodicean is only slightly harder to spell than Shivashankar

Share All sharing options for: Laodicean is only slightly harder to spell than Shivashankar

A thirteen year old Kansas girl named Kayva Shivashankar was crowned the winner of the Annual Sighing Into A Microphone and Covering Your Face Competition. This was her fourth year of entry, which I think is a little weird. She started when she was nine; by now she's probably smoked a cigarette and kissed a boy.* She's practically a woman now. I know if it were a mainstream youth sport, the thirteen year olds would crush the nine year olds. 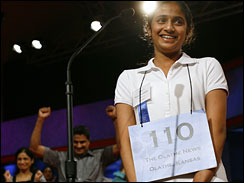 The word was Laodicean, it means "lukewarm or indifferent to religion or politics" so feel free to toss that around the water cooler tomorrow. Go ahead, it's on us. It also means someone from Laodicea, but none of them are around anymore and who cares, nerd.

The favorite to win this year was actually Sidharth Chand. When he misspelled, the crowd gave him a standing O, which is the 15th letter in the Latin alphabet and has a typical frequency of 6.1% in dictionary words and 2.5% at the beginning of words.

My favorite speller was Kennyi Aouad. He had personality and it's reassuring when you see a kid having fun up there. A lot of these kids, especially the homeschooled kids, look like they should be on some kind of government watch list. They worry me.

Note to whomever programmed my spell check: Laodicean is officially a word.

Disclaimer, or I don't know, a girl. Whatever.