So last week the teams thought they had finished at a pitstop but instead Phil gave them another clue. I can't understand how they got so close together again because it seemed like Basketball Sisters were easily like 4 hours behind everyone else. I guess that's how Amazing Race keeps up the suspense.

Margie and Luke, Deaf Kid and Mom, grabbed a cab and Margie the Mom finally said something that every viewer was thinking. She told Luke that he has to stop yelling "Mooooooooom! Gooooooo!! Moooooom!" He's driving her and the viewers crazy. She has had to work harder than everybody else on this race. That kid is a handful.

The teams suddenly were all pretty close as they searched through shops trying to find the Travelocity gnome. With that done they traveled to a place where they road electric bikes through Tiananmen Square. 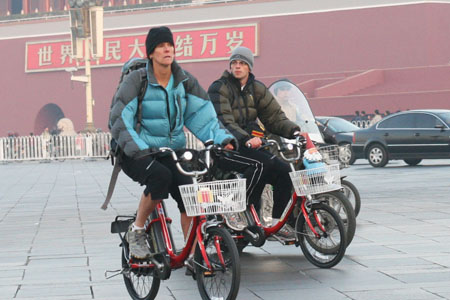 The teams find a detour. They can either put on make up and a costume for an Opera or take and recite back orders at a Chinese restaurant. In China they actually just call it a restaurant.

Asian Lawyers choose the waiter job because they speak the language but even they have to do it more than once. The Asian Lawyer dude was funny because he kept trying to let his sister read the items saying "Okay I'll let you do it by yourself" but he would continue to say it along with her, which was messing her up.

Basketball Sisters chose to put on the make up. I think everybody suspects that the older Basketball Sister might not be as feminine as most chicks. She decides she wants to be the princess for once in her life. They talk about being dressed in "drag" except they might not be aware that they are females so putting on make up isn't really "drag". 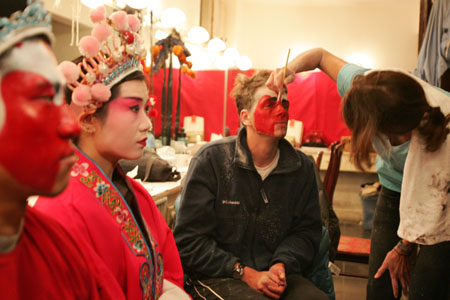 Margie and Luke run into the make up room. This was by far the funniest part. Deaf Kid Luke is crazy annoying. He is terrible at putting on make up. The mom can barely breathe because she has so much powder on her face. "Mooooooom! Let's gooooo! Moooom! Stay stiiilll!" He is doing the worst job and doing it all wrong. His mom is a saint. He puts super thick eye brows on her and just makes her look ridiculous. He signs "sorry mom that I'm not a girl". We all are. I tried to call Kev to talk to him about this part but he wouldn't answer even though I know he was watching. Jerk.

Everybody finishes and they look for the next clue box which is inside the opera building but everybody but the Asian Lawyers think it's outside. So this begins a really long segment where everybody is lost. The cheerleaders say they've been looking for the clue box for 3 hours.

Asian Lawyers use a U Turn on basketball sisters, which means that they have to go back and be waiters. They are so screwed... or are they? The Basketball Sisters actually do the waiter task pretty well considering they don't speak the language and the Cheerleaders are still lost.

In an amazing stroke of luck, Basketball Sisters make it to the next challenge before the Cheerleaders. The teams have to eat fried bugs and starfish. It actually doesn't seem that gross. I know that I'd have a hard time doing one of these eating challenges, because I have an overactive gag reflex, but these foods didn't look that bad. 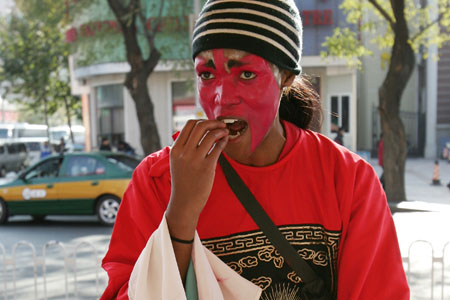 Younger Basketball Sister has a big lead but is taking her sweet ass time eating. She is breaking up the food into tiny bites and drinking a gulp of water with each one. The Cheerleaders arrive and start killing the food, still the Basketball Sister will not speed up and even pukes. Basketball Sisters don't seem to be in much of a rush. Eat the food and get to the pit stop it's a million bucks on the line!

They get to the Chinese "Bird's Nest" (remember the Olympics?) and before they try and get to Phil they stop at a bathroom. Do they realize or care that the Cheerleaders are seconds behind them? Ok, they stopped but seriously she doesn't seem to be in any rush to get out of the can and they aren't even running.

Amazingly the Cheerleaders beat the Basketball Sisters by mere seconds! All because they took a bathroom break. I'm right there with the sister on account of my overactive gag reflex and my small bladder, but c'mon girl! Wow, that's a sucky way to get eliminated.

Next week the finale. Finally we get to see both Cheerleaders in bikinis.