Last time on UNCOMMON SURVIVOR: Wow, you've been working on your Probst voice, haven't you? Sierra finally got voted out, but a new alliance has emerged that leaves Coach and Debbie on the outs. Will the dragon slayer fall on his sword? Will Debbie get caught in more lies and have a meltdown?

We here at Uncommon Sportsman realize you have a choice in Survivor coverage, and we thank you for choosing us. If you are connecting through to the rest of the article, please see the link below, and thank you for flying Uncommon.

Night 30, immediately after the vote. Everyone goes through the pleasantries of eliminating Sierra, but Coach is furious that Erinn and Taj strayed off the plan. They're all cowards to him! Cowardly lions! He whines to Debbie for awhile before she's had enough and leaves to go tell Stephen and Erinn. Coach tells us he doesn't care about the million dollars, he's all about integrity and he's here to change the game. He's definitely going to be a loose cannon if he makes it onto the jury.

Morning 31 starts with Debbie telling us how tired she is of Coach. Finally, some honesty. She tries to talk to J.T. and Taj, but she's got the stink of drowning rat on her. Later, when Stephen and J.T. are mocking her voice and the things she says, she ambushes them to try and plead her case some more. The awkward tension is viscous; the boys stare off and avoid eye contact at all costs. Her behavior worries them both.

Challenge time! It's an auction! Hey, auctions can be sports, shut up. Everybody starts with $500 and bidding is in $20 increments. No sharing. The first item is a bowl of french fries. Taj bids $40, and Debbie shouts out $50. Jeff reminds her that it's $20 increments, so she shouts out $70. Everyone laughs at her, then she says, "Whatever, I just wanna go up on Taj." Giggity? Then Coach outbids her $60 and Taj outbids him. Debbie tops them all with a $120 bid and wins. 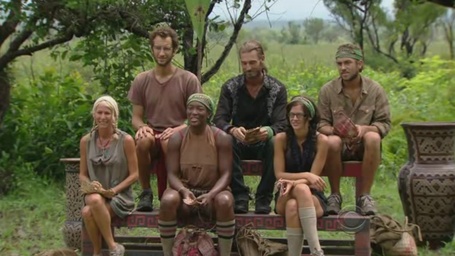 The next item stays covered. J.T. and Stephen go back and forth starting at $100, but Stephen concedes. The item is revealed to be nachos with guacamole and salsa.

The next item remains covered, too, and Stephen bids $20. J.T. can't let what might be food go for that low of a price, so he forces Stephen to outbid him to $100. The item is revealed to be chicken hearts on a skewer. Stephen tries to be excited, but really, he's just hungry.

The last item is.... ding ding ding PRODUCT PLACEMENT. It's a smartphone loaded with video messages from the survivor's families. Taj begins to cry. Jeff explains that the Survivors are allowed to pool money for this item and everyone hands their money to her. No wonder Jeff thinks there was a conspiracy last time! She wins the phone for $20. She bawls so loudly during the video, she doesn't hear the last line her husband said. Jeff tries to tell her what he said, and when it finally dawns on her, "I'll see you back at camp," she goes off like a daisy cutter and nearly rips his arm off. Her choice, though, is to meet her husband at camp, or go with him to Exile so that everyone else can see their loved ones. That's not even a difficult decision. Even if you did want to be selfish and really hated Exile, everyone else just heard your option. Either way, it's raining tears. 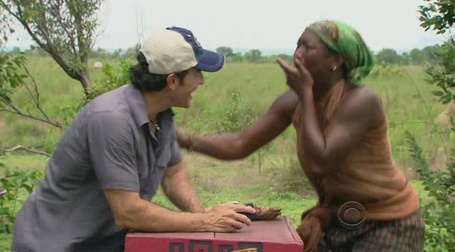 Taj meets the Eddie George at Exile as he steps out from behind a tree. She wants a conjugal visit. He thinks she looks sexy because she's dirty. They should have shown a Brazilian birds suddenly scattering.

The rest of the tribe meets their families. Tearful reunions all around. Stephen's brother is even more effeminate than he is. Debbie's husband looks like a professional bowler. J.T.'s little sister was there, and Erinn's dad; they were forced to eat strange fruits. Coach's loved one? His assistant coach. Hm. Then they go into the jungle and stretch with each other. Ok, I get that, but when you have to tell me it's not something sexual, I have to think it's something sexual. Or it will be sexual, later on. 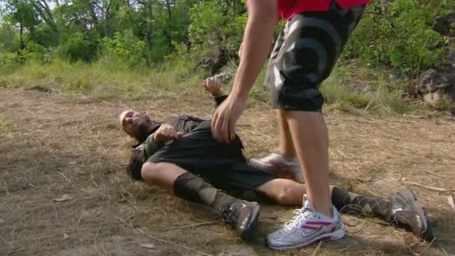 Speaking of sexual; over at Exile, Taj and Eddie build a fire, share a long walk on the dune, and he gives her a foot massage. They totally did it later.

When the families are gone, Coach makes his play to get J.T. to approve a vote for Taj, and he is led to believe that's the official plan. When he leaves, everyone agrees they want him gone. When Erinn leaves, Debbie pleads for her life, going so far as to say she'd give up immunity to either of them. She swears to God, she's happy with third place. The dudes tell Erinn and they all agree that she's too desperate to trust.

Immunity challenge time! Obstacle course memorization with a math equation finale; physical and cerebral, like chessboxing and biathlons. J.T. gets out ahead of everyone. Stephen keeps failing his DUI field test and falls behind. Everyone makes multiple trips to memorize and transcribe, but Stephen is trying to shoot the moon in one trip. He finally returns, puts down his symbols, and catches up to J.T., even finishing a few seconds ahead of him. Stephen's answer is correct and he wins, with some clever thinking and perfect execution. 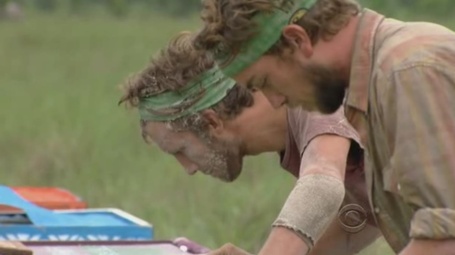 After the challenge, Jeevin make the rounds with the other survivors. They have a mother and two brothers rapport with Taj. They make a good alliance. Everyone vies for their face time with Jeevin. Coach tries to pal it up with them, but they don't like him and J.T. doesn't want to lie to him. It's clear Jeevin is now a dangerous player, and everyone seems okay with that.

Tribal council time! Jeff immediately goes to Coach for his analysis on everyone. Taj calls Coach a warrior and a dragon slayer. He tells everyone that he didn't come up with that. Jeff makes a crack about him and Coach pretends he loves it. You know he's going to go mutter in the dark about it later. Jeff, sleep with the light on, dude. Jury members Brendan and Sierra mock Coach thoughout, even when he goes to vote, throwing their coats over their shoulder like he does. It's funny, but I also think it's feeding the ego.

The votes are read off: one Taj, one Coach, one Debbie. The next two are for Debbie. It was the desperation killed her. 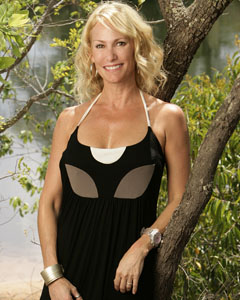 In the scenes for the next episode, Erinn says something anti-semetic and Coach picks a fight with Pat Benatar.